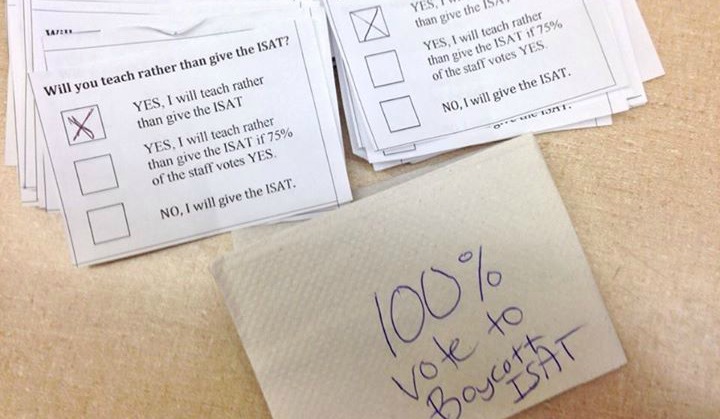 Elementary school teachers in Chicago have taken what progressive education

advocates are calling a “brave” and “bold” stand against the destructive role of high-stakes testing in public schools by voting unanimously to boycott upcoming, state-mandated tests.

About 40 teachers at Maria Saucedo Elementary Scholastic Academy, located in the Little Village neighborhood of the city, voted—without dissent—to refuse administration of the Illinois Standards Achievement Test (ISAT), an achievement test given across the state.

“We are not afraid. We’re standing strong for our kids and what is right… This is one steptowards reclaiming humanity and the joy oflearning and education.”
—Sarah Chambers,special education teacher

City and school administrators have said there could be severe disciplinary action for their stance, but the teachers, who gave a press conference to local media on Tuesday, say the test serves no discernible educational purpose for their students while taking away valuable teaching time.

The unanimous “Yes” vote was taken on a paper ballot (see above) that asked the question: “Will You Teach Rather Than Give the ISAT?”

Following the announcement by the Saucedo faculty, the Chicago Teachers Union announced they would support the boycott and fight back against any disciplinary actions the teachers might face for their stand against the mandated test.

“The Saucedo educators have taken a bold step in refusing to administer a test that is of no use to students and will be junked by the district next year,” said the union’s vice president Jesse Sharkey. “We know that parents all over the city are opting their children out of this unnecessary test, and we commend them for doing what is in the best interests of their children.”

Speaking on behalf of herself and her colleagues, Chambers said they understand the possibility of consequences, but feel assured they are doing the proper thing for students by fighting back against the culture of testing that has come to dominate state and national public education policies.

“We are not afraid. We’re standing strong for our kids and what is right,” Chambers said. “This is one step towards reclaiming humanity and the joy of learning and education.”

Watch footage from the press conference:

According to the CTU, the ISAT test has been the primary tool used by Chicago Public Schools for “its destructive, destabilizing policies” that include the controversial closure of neighborhood schools all over the city, many of them in low-income neighbors like Little Village.

“We should resist every opportunity to steal our time, resources and professional judgment to satisfy the insatiable data monster that No Child Left Behind and Race To The Top have created.”
—Karen Lews, CTU president

“System-wide,” the CTU said in its statement of support for the Saucedo teachers, “the ISAT has infected the vigor and breadth of curriculum as teachers and students became stymied by the requirements of a narrow test-based approach to learning.”

In a separate statement, CTU president Karen Lewisslammed the role of high-stakes testing central to the ‘No Child Left Behind’ policies of George W. Bush and those that survive under Obama with his ‘Race to the Top’ initiative, calling for a swift end to such policies while supporting those who resist them.

“Those of us who work with children know that there are so many characteristics that cannot be quantified,” said Lewis.

“No test written from afar—that doesn’t give us immediate feedback and is not aligned to the curriculum—can ever provide us with the information we need to adequately help our students,” she continued. “We should resist every opportunity to steal our time, resources and professional judgment to satisfy the insatiable data monster that No Child Left Behind and Race To The Top have created.”

Jesse Hagopian, a high school history teacher at Garfield High School in Seattle and an outspoken critic of the corporate-back education

“The brave teachers at Saucedo Elementary are taking up the struggle and using the power of collective action to refuse to waste students’ valuable class time with another destructive test,” said Hagopian in a post on his personal blog, I Am an Educator.

Last year, Hagopian and his colleagues at Garfield led a boycott of their own against a state-mandated exams in Washington called the Measures of Academic Progress (MAP) test.

“[Corporate education reformers] are pushing these tests because it is a multibillion dollar industry and because reducing the intellectual process of teaching and learning to a single score is the centerpiece of their plan to label the public schools as failing and then push their privatizing agenda.”
—Jesse Hagopian, teacher and activist

Having been through the process himself, he offered this advice to the teachers at Saucedo:

Corporate education reformers will use their wealth to publicize the idea that you teachers are selfish and your refuse to give the test will damage students. They will complain that teachers don’t want to be held accountable and that high-stakes standardized is the key to improving education. Don’t listen to them. They are pushing these tests because it is a multibillion dollar industry and because reducing the intellectual process of teaching and learning to a single score is the centerpiece of their plan to label the public schools as failing and then push their privatizing agenda. Instead, listen to the many thousands of parents, students, and teachers around the nation that are supporting you in this struggle to assert that our children and educators are more than a test score.

The corporate education reformers, and the politicians they have bought, will issue threats of discipline for your audacity in refusing to hand the schools over to testing companies. They threatened us in Seattle when we refused to give the MAP test, but we showed that the power of solidarity can overcome the powerful. Not a single teacher was disciplined and the MAP test was made optional through our struggle.

We scrapped the MAP. You can Ice the ISAT!