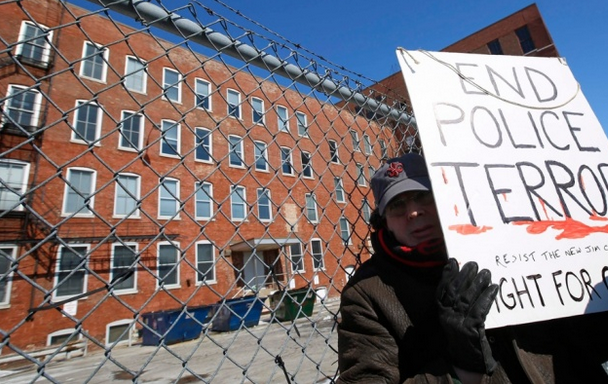 A protestor stands outside a police facility called Homan Square, demanding an investigation into the site. Photograph: Jim Young/Reuters

A senior Chicago police commander in charge of a major unit operating out of the controversial Homan Square police warehouse has resigned, the Guardian has confirmed.

The news came as attorneys for three Homan Square victims announced that they would file the first civil rights lawsuit over the facility with the aim of shutting down the complex likened by attorneys and activists to the domestic law enforcement equivalent of a CIA “black site.”

In an emailed reply to the Guardian on Thursday night, Martin Maloney of the Chicago police said:

Chief Roti left CPD to become the chief of staff for the Illinois state police [ISP], where he will work for another recently departed senior CPD official who was appointed to be the director of ISP. It’s been in the works for some time.

The organized crime unit, according to its website, is tasked with confronting illegal narcotics, gang activity and vice in Chicago, operations that numerous people formerly held at Homan Square believe led to their incommunicado detentions there.

Roti took charge of the organized crime division in 2010, the Chicago Sun-Timesreported; and led the bureau through a command reorganization in 2011. Published reports indicate Roti is a 27-year veteran police officer.

The Guardian exposed a series of incommunicado detention and abuse at the Chicago police facility, including people being held for extensive periods of time without public notifications to their families or access to attorneys.

Sullivan said that Roti himself did not operate out of Homan Square, but out of police headquarters.

Yet the organized crime bureau was cited by the Chicago police “fact sheet” released on 1 March, attempting to refute the Guardian’s reporting about a complex where 11 people thus far have told the Guardian they were effectively disappeared.

“[S]ensitive units housed at the [Homan Square] facility include the Bureau of Organized Crime (including the narcotics unit),” the fact sheet reads.

Eleven people, seven of them black and HispanicChicagoans, have thus far told the Guardian that they have been held at Homan Square. Their detentions most often concerned drug suspicions. On several occasions, while in custody, police interrogators attempted to get detained men and women to either inform on others or deliver guns to the police, sometimes using the prospect of freedom as an enticement. The Chicago police say there is nothing untoward about Homan Square.

According to Chicago city data, Roti’s annual salary was $176,532. A local website cited Roti in 2014 as the 16th highest-paid public official in Chicago. The superintendent of police, cited as the highest paid Chicago public servant, is listed as making $260,000 annually. Mayor Rahm Emanuel makes $216, 210.

The civil rights lawsuit, expected to be filed on Thursday evening in the US district court for the northern district of Illinois, comes on behalf of two Homan Square victims the Guardian wrote about on 4 March: John Vergara and Jose Garcia. They are joined by another man held at Homan Square with them in the same September 2011 incident, Carlos Ruiz, whom the Guardian did not interview.

Vergara and Garcia told the Guardian that masked police police officers “kidnapped” them from a Humboldt Park deli; held them and three others in a Homan Square “cage” without booking or access to counsel for eight to nine hours; and released four of them that evening without charge after Vergara threatened to tell a civil rights attorney what the police had done.

“The plaintiffs would like the facility to be shut down,” said attorney Blake Horwitz, who is representing Vergara, Garcia and Ruiz.

“They’ll be seeking compensation for their injuries, and they’ll be asking that the officers be held liable and responsible for their actions, and for the officers to be punished.”