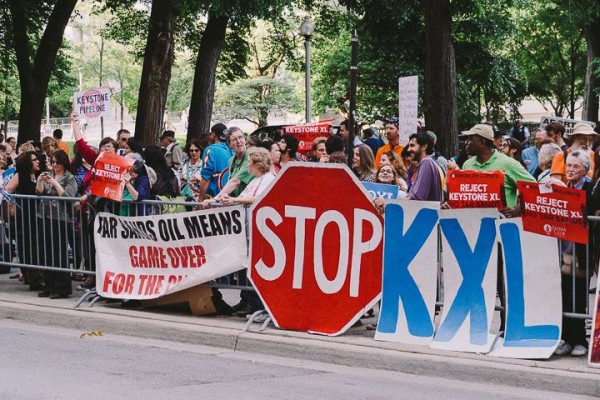 Yesterday afternoon, hundreds of activists gathered outside the Chicago Hilton, where President Obama and other key political leaders attended a fundraiser for the Democratic Congressional Campaign Committee. As a part of an international campaign against the Keystone XL Pipeline, we were there as a reminder that our movement will not back down on this issue—that the president’s decision on KXL could determine the fate of our climate and our future. Attendees represented a number of groups, including Chicago Youth Climate Coalition, 350.org, #IDLENOMORE, Sierra Club, CREDO, Chicago 350, Friends of the Earth, Center for Biological Diversity, and many more.

As a student at Roosevelt University, and a member of the Chicago Youth Climate Coalition, I attended the first Chicago birddogging rally at Argonne Laboratory. It was inspiring to see many of the same faces, but even better to experience the growth of this movement.

Despite not having a megaphone for the first portion of the rally, our group quickly swelled into chants like “We are unstoppable, another world is possible”. I was encouraged to meet with so many young people—from high school through grad school—who were trying to get more involved. Many older people found an outlet in Chicago 350, which has its first meeting today! 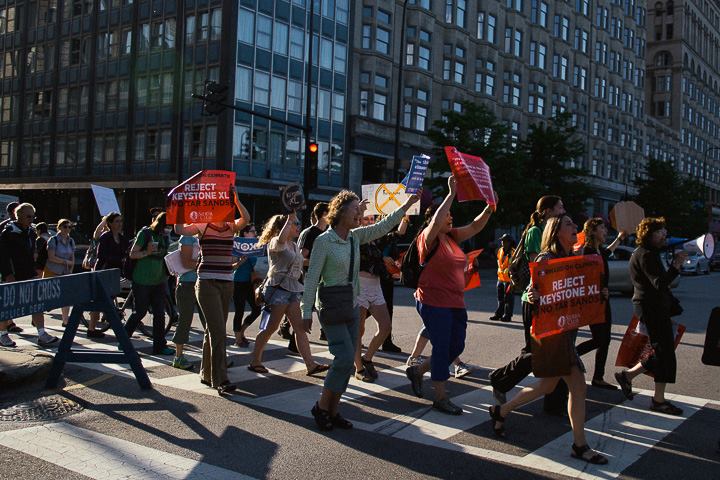 It was great to meet with students working on fossil fuel divestment campaigns across the country. Divestment has become a common thread among student leaders. By challenging our colleges and universities to end their profit from the destruction of our planet, we prepare ourselves to challenge the economic and political forces that will wreck our climate.

We chanted for over an hour before the arrival of Obama’s caravan. While it can be discouraging to only have a few seconds to feel like you’re really reaching Obama, the true power of these rallies is in meeting with people that know that we don’t have a choice. At each event, I become more confident that there is community that is ready to stop tar sands extraction at any cost.

After the passing of Obama’s caravan, we finished strong with a march around 3 city blocks. Whether Obama saw our march or not, whether mainstream media covered our story or not, we made it clear that we’d be back again. It was good to know that millions around the world were willing to do the same.

The rally was an excellent kick-off for a summer of action in Chicago.

Chicago 350.org will be launching a city-wide divestment campaign, and is sure to aid in other fights as well.

Keystone XL protestors were joined by groups like Immigrant Youth Justice League and Illinois Coalition for Immigrant and Refugee Rights, who were calling on Obama to stop the deportation of hundreds of thousands of undocumented people every year.. While we were happy that our groups weren’t in conflict, it would have been great to build a stronger connection between our causes. Many members of CYCC were inspired by a speech by Aura Bogado at the Swarthmore Divestment Convergence this February, in which she explained immigrant rights as a facet of the climate justice movement.

Gianna Chacon, a sophomore (and bad-ass campus leader) at Roosevelt University, will be working with Little Village Environmental Justice Organization (LVEJO) this summer through a 350 fossil-free fellowship. “LVEJO works on building a connection between the Hispanic community and the environmental movement through outreach and organization” she said. “I got into to the environmental movement out of a realization that refineries and other causes of pollution were located in low-income and minority communities, the very communities that are denied a voice. To stop climate change, we as a movement must be inclusive and work with the communities that face the direct consequences of environmental damage.”

In addition to building a more inclusive movement, CYCC plans to work with groups across Illinois to keep fracking out of our state. Recent action by grassroots groups in Springfield demonstrates the need for strong and unwavering resistance. Just as in the fight against Keystone XL, we have no room for compromise.

We’ll also be working this summer with several urban agriculture and community groups. As we continue to build resistance against fossil fuel extraction, we must also create resilient communities and foster a city independent from fossil fuels.

If you’re interested in getting involved in the Chicago Youth Climate Coalition, come to our first summer meeting, June 9th, or contact us at cyccboard@googlegroups.com!