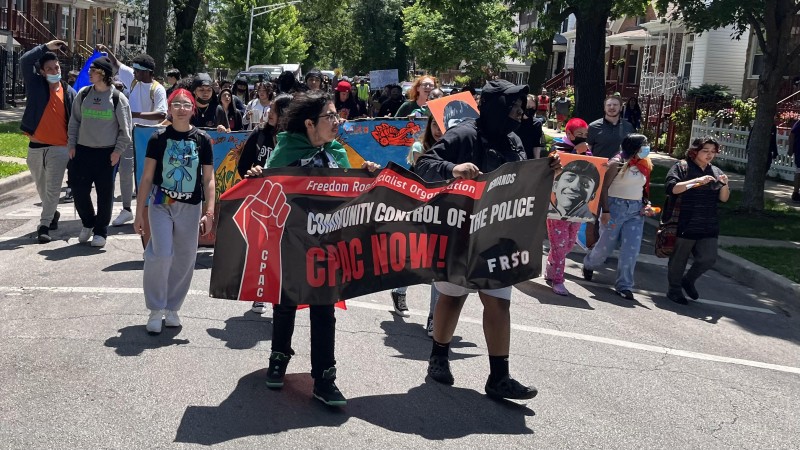 Chicago Students Want Police Out Of Their Schools

Above Photo: Chicago students demand police get out of their schools. Fight Back! News / Joe Iosbaker.

Chicago, Illinois – On June 2, 250 students at Little Village Lawndale High School (LVLHS) in Chicago walked out of school to demand “Police out!” They marched through Little Village, which is the largest Latino neighborhood in Chicago, to the North Lawndale neighborhood, which is a Black community. The protest was organized by the LVLHS FightBack student group, which called for “Black and Brown Unity.”

Other demands raised by the students included equitable funding for all four schools. They explained there are four separate schools within one building. The school which has a predominantly Black student body receives less funding per student than the other three.

They also want an end to punitive policies on students. They explained that they want outreach workers and community violence prevention specialists in their schools. They are also calling for the implementation of restorative justice in the building.

LVLHS was built after a hunger strike by 19 residents of Little Village in 2001, demanding a new school be built because the high density of residents.

LVLHS FightBack was formed in January when Mayor Lori Lightfoot set out to force teachers, staff and students back to school in person despite the raging COVID omicron variant. The Chicago Teachers Union fought for remote teaching. Many schools saw walkouts, including LVLHS, where FightBack was the group that organized it.

After the march, Fight Back! newspaper interviewed three of the student activists:

Fight Back!: Can you tell our readers about why you walked out and marched; why you made Black and Brown Unity the biggest text on your graphic for the protest; and what was accomplished?

Angel Naranjo: What better way is there to unite Black and brown students than to struggle?

Leila Gutierrez: Walking out brings more attention to what we want, our message, and it also brings people together, which is also to your next question about Black and brown unity, how that was achieved: the walkout and the march brought people together.

Leila Smith: I saw that a lot of Black and brown students got together and marched for something that we both are very passionate about, such as unifying and getting together. And we haven’t really seen anything like it in our community in a long time.

Fight Back!: Can you explain what you mean by punitive policies in the schools here?

Naranjo: It includes policing women’s bodies, policing male bodies. Some students show a little bit of stomach. They’re not allowed into their classrooms. Wearing hats or walking into another school on campus can get you suspended.

Fight Back!: A number of the Chicano or Mexicano students carried the Mexican flag. Layla, you have a red, black and green flag around your shoulders. Can you explain the significance?

Smith: I have a Pan African flag around my shoulders because I am representing my culture, because I think it’s really necessary to be out marching for something