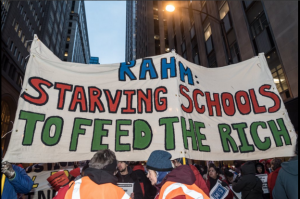 Above: Chicago Teachers Protest Feb, 4, 2016, From Twitter by Sarah-Ji ‏@sarahdashji

Since he became mayor, Rahm Emanuel, has been at war with public education in Chicago as budget cuts, school closings, disputes over teach salaries have been ongoing. This Thursday, the Chicago Teachers Union organized a mass protest of thousands of teachers, students, parents and residents of Chicago. They took over downtown Chicago for the day.

The Chicago Teachers Union (CTU) describes the reasons for the protest writing:

The march came two days after Mayor Rahm Emanuel’s handpicked Chicago Public Schools (CPS) CEO Forrest Claypool declared war on public school educators by threatening $100 million in classroom cuts—roughly 1,000 layoffs—and just one day after the CTU withdrew nearly $1 million from Bank of America. The CTU closed its BOA savings account in protest of that bank and other financial institutions that sold CPS toxic interest rate swaps, and are demanding a payout of at least $228 million—almost the exact same amount as cuts enacted by the Chicago Board of Education to schools and special education.

Polls show the CTU has the support of the public:

The protest began at Bank of America of La Salle Street in downtown Chicago. Chicago Now reports that the Chicago Public Schools (CPS) “just sold $725 million in bonds as a Toxic Debt’ Wednesday, a Debt that has a lower chance of being repaid with interest  the CPS rate was at an 8.5% interest rate; that’s 141 times the rate paid on a typical bank savings account.” According the the union “CPS has now lost over $502 million dollar in bank toxic swap deals.”

Sixteen demonstrators were arrested prior to the start of the march inside Bank of America on LaSalle Street for sitting down inside the branch and refusing to move. On Wednesday, the union closed its account with Bank of America, moving more than $700,000 to another bank it said does not profit from interest rate swap deals they say are predatory.

“We have to make a choice—banks, or schools,” CTU President Karen Lewis told reporters as teachers and their supporters walked a blocks long picket in front of the bank.

The Chicago Teachers Union reported that one of the arrestees, Sarah Chambers said, “Rahm has money for the banks but not for our students, When it’s reached a point where teachers are occupying banks to make their voices heard, it shows that we need an elected school board.” Those sitting in the bank  demanded that “Chicago BOA President Paul Lambert begin negotiations with the Union and the district for the return of the toxic swap termination money paid out to CPS. All 16 arrestees were released last night shortly before midnight.”

The crowd swelled and they took to the streets marching through the loop ending at City Hall. There were chants calling for the resignation of Rahm Emanuel and for the recall of Governor Rauner. Chicagoist reports:

Speaking before demonstrators formed a picket line around City Hall, CTU Vice President Jesse Sharkey said: “The Bank of America got paid and we got laid off. We got ripped off, and now we’re going to get pissed off. We’re sick and tired of being lied to, of being taken advantage of, of seeing our schools cut, and we’re going to stand up and fight back.”

The Teachers Union rejected a contract offer on Monday saying the public schools, which is run by a board selected by the mayor, “failed to address the long term health of the public school system, the needs of students and conditions in schools. The district then announced more than $75 million in cuts.”