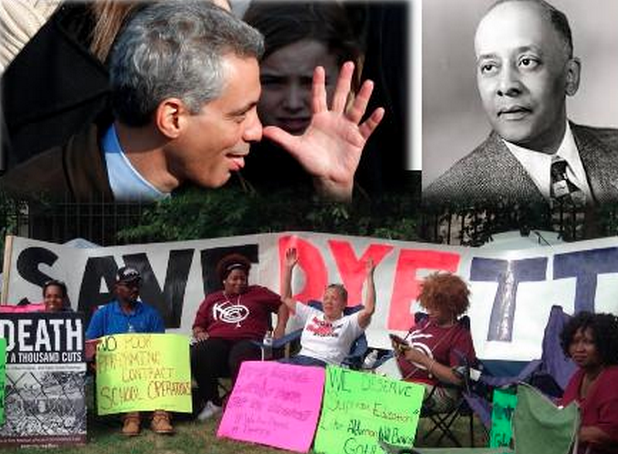 The years long struggle on the part of parents and students and community members around Dyett High school on Chicago’s historic south side is a stellar example of long-term community building and organizing, which differs greatly from the mere activism some currently herald as “the movement.”

Black Agenda Report’s Bruce Dixon interviewed Jitu Brown, a member of the Coalition to Revitalize Dyett High Schoolon August 26, 2015, the tenth day of a hunger strike staged by parents and community residents resisting the closing and privatization of their neighborhood high school and the intransigence of Chicago’s City Hall apparently determined to disperse and destroy their community and rebuild it for someone else.

Why are parents and community people on hunger strike at Dyett School? What’s at stake for your families and communities?

“We’re on this hunger strike because we’ve done everything else above and beyond what we should have had to do. Since 2009 we’ve come up with a detailed vision and plan not just to revamp Dyett High School, but to create a K through 12 educational system that makes sense for our families and communities. The official response has been ignoring us, lying about us, our demands and our community, hiring paid protestors to discredit us, just years of unbelievable behavior on the part of officials.

“We’re not just seeing school closings here, we’ve seen the closings of hospitals and trauma centers, the elimination of grocery stores and more. We’re looking at a systematic disinvestment in our families, our youth, our elders, our communities. The struggle over Dyett school is the latest unfolding chapter in a decades-long effort to remove our people from those neighborhoods the gentrifiers, the privatizers and the profiteers now covet, and that our mayors and public officials want to give them.

Our response back in 2009 was to come up with the Bronzeville Global Achievement Plan, partnering Dyett High School with 6 local feeder schools, implementing restorative justice and other innovations that resulted in the largest increase in college bound high school graduates anywhere in the city of Chicago, and the biggest decrease in suspensions. Dyett High School beat out 400 schools nationwide to qualify for the 2011 ESPN Rise Up Award which got us $4 million dollars but the children never got to take advantage of it because the city ordered the school closed the next year. Students remaining in the school had to take their AP and phys ed classes online.

“Since then we’ve had scores of public and private meetings with officials and actions, a sit-in at the mayor’s office. We took the framework we’d developed and expanded it, we brought in allies from around the city, like Teachers for Social Justice, Blacks and Greens, the Chicago Botanic Gardens, and in April we submitted our plan for the Walter Dyett Global Leadership and Green Technology Academy to the school board.

“But instead of working with us, they issued an RFP (request for proposals) and invited in school privatizers, private charter school operators with political connections and histories of running mediocre schools, rather than working with parents and students and communities with a solid track record of steady improvements.

“At a June 17 public meeting we turned out 250 people. There should have been a follow-up meeting on August 10, but city officials stopped returning our calls and giving direct answers when and where it would be. On August 7 they issued a press release on their web site canceling that meeting. An August 26 vote on the matter was also canceled as was another hearing scheduled for September 15. That was the straw that broke the camel’s back.

“The city has no problem working with other neighborhoods that stand up and say no to the charter operators, but not us. We’re forced to conclude that City Hall, which calls the absolute shots for Chicago’s public schools, is determined to deny us our high school because they want to further fragment, disconnect, break up and destroy the community which has been in this part of the south side of Chicago for almost a hundred years now.

“Our elected alderman Will Burns, who does whatever the mayor tells him has overseen the closure of several elementary schools and another high school during his time in office. One of them was nearby Overton School named after a progressive back businessman of the early 20thcentury. Our elected officials sold the building for a mere $300,000 to a privatizer who’s making artist lofts out of it.

“Our alderman, along with our representative in the state legislature have recognized our efforts by calling our funders, getting us audited, and more. Chicago Public Schools and City Hall have simply refused to work with us because of who we are, because of what community this is, and because they’ve already decided to break it up, to supplant to move us out and develop this part of the city for some other people and some other purposes.

“Our parents and families have decided that they are not gonna take one for the team, that we are tired of the runaround. We have jumped through every hoop, we have met with every bureaucrat. We are demanding our school back. The charter operators say they want to put an arts and entertainment school, and a sports school where Dyett is now, as if that’s all we can do. We sit right across the street from historic Provident Hospital, the first black operated hospital in the US and all we’re good for is sports, arts and entertainment? We will not sit back and allow our high school to be handed over to mediocre charter school operators with political connections.

“Passing Dyett High School out of existence and handing the property off to some privatizer is negating, it’s erasing almost a century of our people’s history on the south side. Dyett High School was named after Capt Walter Dyett, a south side Chicago musician and educator who taught at Wendell Phillips and DuSable high schools. Dyett was an inspired teacher and a ferocious disciplinarian who taught Nat King Cole, Dinah Washington, Von Freeman, Gene Ammons, Redd Foxx, Eddie Harris and many more.

“Our vision of Dyett as a Green Global Leadership Academy is worthy of that history, and our children are worthy of that opportunity. That’s why we’re here.”

How has the struggle over several years around your specific demands for a Green and sustainable high school served to build leadership capacity among parents, students and members of your community?

“We come from the Ella Baker school of organizing, not the charismatic school of leadership. We know that brilliance is already there among our people. As organizers we understand our job is to create spaces where people who’ve been told they cannot win can become leaders. In that process the organizers are educated by those they help organize… It’s a model we’ve pursued for years now…

“We think it’s time to stop being activists and start being organizers. Activists might move an issue to the forefront, but activists are responsible to nobody but themselves. Activists can be here today and gone tomorrow. Organizers bring people together to make and adjust and execute long term plans, organizers empower and train and raise up new leaders from among the people. Organizers and the leaders they help create are responsible to the people responsible to communities. We expect to be holding organizing institutes beginning later this year, to show how to confront money power with people power…

“Our efforts have raised up local leaders like Jeanette Taylor, who’s been a local school council member for 20 years, out here in front of the school every day at 7:30AM greeting students and parents and teachers as they come in. We’ve got leaders like Irene Robonson, a mother and grandmother who was hospitalized the 8th day of the strike, but we cannot keep her out of the effort…

“Myself, I come out of KOCO, the Kenwood Oakland Community Organization, one of the city’s oldest and most successful black led organizing group. We’ve been fighting for affordable housing and winning, fighting school closures and winning, and we are forced as well to fight the officials elected to represent us.

“There are organizing lessons in many places. DC’s Marion Berry, for instance, was a masterful organizer who in his time raised up dozens of able local leaders. Berry only became corrupted when he moved away from the people he organized…

“We’re optimistic and we’re out here every day at 555 E. 51st Street. On this 10th day of our hunger strike, we’re not wanting for local support. Hundreds of people come by to see how we’re doing every day. Those that bring juices, we ask that they be commercially packaged and sealed for health reasons, no homemade stuff.”

How can people around the country support you?
“Call the office of Mayor Rahm Emanuel at 312-744-3300. Tell him the whole world is watching. Chicago’s mayor controls the school board. He can decide this afternoon to give us our high school back and have the building keys put in our hand tonight.

“You can read, tweet and retweet news about the ongoing hunger strike at #FightForDyett”