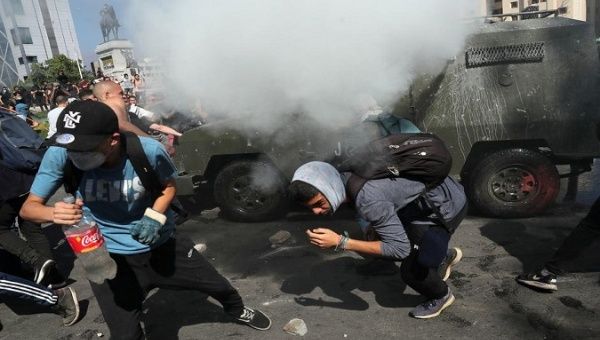 Chile: 5 Dead In A Week As Violent Repression Continues

Above Photo: A violent week was lived in Chile, mourning five deaths after months of demonstrations. | Photo: Reuters

During the last week of January, dozens of people were injured in clashes with police.

Chile has faced one of its most violent weeks after five people have died due to the increase of violence and repression in the hands of the militarized police (Carabineros).

The deaths took place in different locations of Santiago. So far, 31 deaths have been registered since  Oct. 18 when demonstrations began against the measures promoted by the current neoliberal government.

The first death was Jorge Mora which resulted from the police’s negligence as he was hit by a police truck outside the Monumental Stadium after the match between local football clubs Colo Colo and Palestino.

According to the official version, the officer driving the truck was attacked outside the sports complex so he did not notice hitting the man. However, witnesses indicate that the truck was speeding up and killed Mora in a “hit and run.”

The officer  was charged for the killing and was prosecuted for “negligent conduct.”

NOW While in Plaza de la Dignidad hundreds of cyclists are preparing to demonstrate through the streets of Santiago.

In a similar fashion, a person was reportedly killed after being run over by a TranSantiago bus in San Ramon, the same bus that had been previously hijacked and driven by a hooded man.

Due to the seriousness of his injuries after the hit, the demonstrator, identified as Sergio Bustos, died at the Padre Hurtado Hospital.

“The same demonstrators jumped on the driver who had stolen the bus and beat him, causing him serious injuries,” police reported after the accident.

Another death happened after a fire on an Alvi supermarket. Inside the place, firemen rescued and transferred three people to the Hospital Padre Hurtado. The third, a man, died in the fire.

Police fired a tear gas canister directly into the head of a man who was being interviewed by a British media correspondent in Providencia.

On the other hand, the looting of a Cruz Verde pharmacy, located in Santiago, was registered. At the site, a security guard stabbed a person who was apparently participating in the crime.

In addition, the death of 24-year-old, Ariel Moreno, who was rushed to the hospital in critical condition after being hit in the head, was confirmed during demonstrations in the Padre Hurtado commune. Moreno was injured as he was part of a protest in honor of Mora.