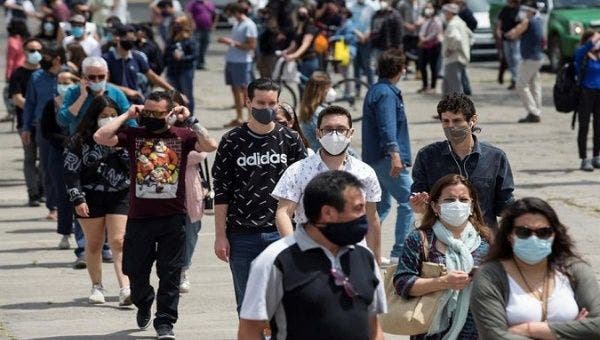 Above photo: Chileans go to the National Stadium, where voting tables were set up, to cast their vote in the plebiscite in Santiago, Chile, Oct. 25, 2020. EFE/ Alberto Valdes.

The Constitutional plebiscite also stands as the fundamental instrument to solve the social crisis the country is going through.

Sunday, Oct. 25, 2020 – Chileans today overwhelmingly approved, at the polls, the doing away of the Constitution drafted and approved under the military regime of Augusto Pinochet and gave the green light to the creation of a Constitutional Assembly.

According to official data by Chile’s official electoral body, with 45.24% of the vote counted, 77.85% percent of the voters checked the Approval box, an overwhelming figure in contrast to the 22.15% percent who chose to legitimize the current Constitution, which was supported by a majority of right-wing parties. Chileans also overwhelmingly chose a constitutional convention as the method to create a new constitution.

Also, thousands of Chilean citizens cast their votes in 65 countries. Argentina, the United States, Spain, Canada, and Australia were the nations most represented. Over 80% of voters overseas supported approval for a new constitution.

This is the first time in the South American nation’s history that citizens are asked whether or not they want a new Magna Carta. Citizens also voted to create a Constitutional Convention to draft the new fundamental law.

President Sebastian Piñera highlighted the massive participation in the elections and said that the process “demonstrated the democratic, participative, and peaceful nature of the spirit of the Chileans (…) The voice of all citizens has been heard loudly; the vote has had the same value.”

Also, Chilean Senate’s President Adriana Muñoz D`Albora said that the people had expressed their will to end the dictatorship’s Constitution. “Chileans, we are part of this democratic and historical journey that wrote vote by vote and with a large majority a clear message to those who insist on keeping things intact,” she stated.

In a statement, the Network of Intellectuals, Artists, and Social Movements in Defense of Humanity in Argentina also congratulated the Chilean people. “Now more than ever we must raise the flags, continue in the streets and proclaim with one voice, that the new Chilean Constitution must be the luminous and re-foundational expression of a people liberated, at last, from corporate oppression and social marginalization.”

The people of Chile have shed the shackles of Pinochetismo – and opened a new chapter in their history.

We stand with the movement that fought so hard – and lost so much – to deliver this victory. pic.twitter.com/XcTO3iaxHi

The national plebiscite came at a time when the COVID-19 pandemic severely hit the country’s economy. The referendum also stands as the fundamental instrument to solve the social crisis of a country that experienced massive peaceful demonstrations in October last year, violently attacked by the repressive state forces, something that brought back the ghosts of police violence that prevailed in the country during the years of dictatorship.

Earlier in the day, various social organizations denounced acts of repression by Carabineros (police) against demonstrators who gathered in the Plaza de la Dignidad in Santiago, minutes before the polls closed.

#Chile | During the 2011 demonstrations, the dog became known for defending protesters from the Chilean Military Police. #NegroMatapacos #HumanRights pic.twitter.com/W9KQp1SxD4