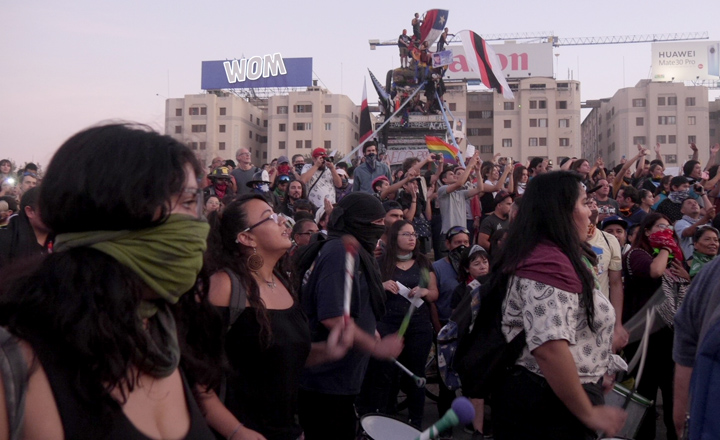 Neither the carabineros with their usual violent repression, nor Piñera, the dictator-puppet of US policies for the continent, nor even the hegemonic media with their lies or concealment of what is really happening, could prevent that human tide that has been coming out of the streets day after day to overflow Dignity Square in the center of Santiago. This territorial space has become a symbol of the popular challenge to those who want the people to be submissive and obedient. Today once again it was filled with music bands, creative slogans and even fireworks were thrown from the base of the monument that makes up ground zero of the square.

Since very early on it was known that it was going to be a difficult and intense day, as the government ordered the closure of several Metro stations, for fear that as was seen in the last few days, the high school students would manage to evade paying their fare. This provoked more anger from the people who were trying to go to their jobs and in their indignation, they logically cursed Piñera and the useless people who accompany him.

Regardless there were student demonstrations and some clashes with the police. For their part, feminist organizations set up a small tent in front of the University of Chile, to carry out a “stampatón”, consisting of stamping anti-patriarchal phrases on T-shirts, or posters, one of the most popular read; “I don’t need a prince charming”.

Then, from 4 p.m. onwards, the bullfights of the carabineros began, first against the young people who were settling in the surroundings of the square with several armored vehicles (which have all kinds of graffiti all over them from constantly being pelted by eggs or fire extinguishers.)  As usual the demonstrators retreat on these occasions but remain in the surroundings waiting for the moment when the police leave the place and there the plaza begins to fill up again with joy, the desire to embrace each other and chanting all together that Piñera is still a thief. Or “those who don’t jump is a paco” (police);the slogan that rallies the maximum amount of unity of the popular camp around the repudiation of the carabineros who are just as brutal now as they were when Pinochet was around.

Friday represents the symbol that the revolt not only does not stop but grows. A good example of this is what happened in the afternoon when thousands and thousands approached the square earlier than usual because they wanted to listen to the Illapu group and Nano Stern from the balconies of the square’s radio. When suddenly a voice was heard announcing that the radio was starting to transmit, the public exploded in approval and accompaniment.

Minutes later the pacos attacked violently against the crowd that was listening to the concert, without any provocation, but unlike other times, the people did not move and continued to pay attention to the music, while the shouts of repudiation of the pacos grew again, with a chant that warns, “the bullets that you throw, are going to come back to you”.

An hour later the Square was exploding again as in the best occasions, the music bands, the performances, the street vendors reappeared, and above all, the desire to “breathe in peace”, as a spontaneous parade made clear. Prominently an enormous Palestinian flag appeared waving next to the Colo Colo flag, the Mapuche flag and the Chilean flag, at the top of the monument.

Among the circulating comments, it was confirmed that a water-slinging vehicle was burning in the vicinity, while there was another death at the hands of the pacos. According to witnesses a young man in his 20’s was attacked by a police vehicle, which fled, leaving him to bleed to death. In addition, three young people suffered eye injuries in Dignity Square. News from Puerto Montt, arrived reporting that thousands were marching under a deluge there and in Antofagasta thousands of people gathered and the same thing happened in Valparaiso.

Today the Chilean people once again have demonstrated that they are not willing to let go of the streets, because their destiny as a country is at stake there and nowhere else.