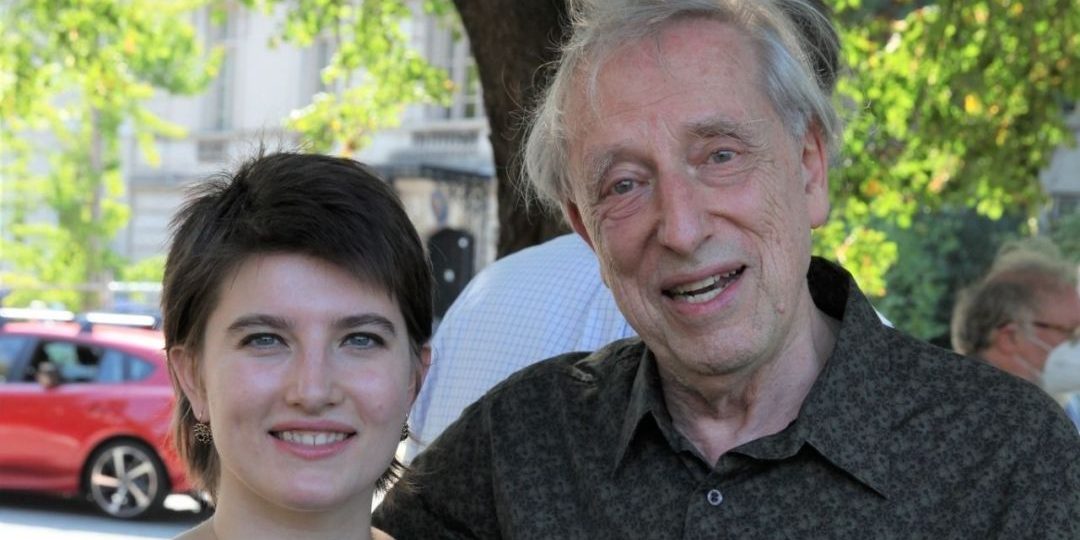 Chile Is Taking The Final Steps Of Dismantling Dictatorship

Renowned Chilean author and human rights activist Ariel Dorfman delivered these remarks at the 45th anniversary Letelier-Moffitt Memorial Program on September 19, 2021. A collection of photos from the event has been made available for those who weren’t able to attend in person.

The Institute for Policy Studies holds this program every year at the site of the 1976 assassination of IPS colleagues Orlando Letelier and Ronni Karpen Moffitt by agents of Chilean dictator Augusto Pinochet. Letelier was a former Chilean ambassador to the United States and Moffitt was a 25-year-old IPS development associate. A virtual human rights awards program in their names will be held on October 13.

During our exile in D.C., Angélica and I would come year after year to Sheridan Circle for this commemoration to gather with Isabel Letelier and Pancho and the other Letelier sons and our friends in the solidarity movement and our dear IPSers, some present today and some, alas, departed from our midst, each year measuring how much closer we were to ending Pinochet’s dictatorship, an end that would be a fitting way to celebrate the lives of Orlando and Ronni that were lost here.

Each occasion was special. And so is today’s encounter because recent events in Chile allow me to declare that, 45 years after this assassination and 31 years after democracy returned to my country, the final steps of dismantling the dictatorship and its perverse legacy are being taken.

This meeting today is also unique for me, personally. To be introduced by my own grand-daughter and to listen to the son of two dear friends who warmly welcomed us here during our exile, Elianita and Peter, is amazing proof of how the new generations – who were not alive when Orlando and Ronni were murdered – are taking over the commemoration and the ongoing struggle.

More proof still: we just heard from Léonce, who takes up the work of sister Diana Ortiz, my friend and a sister to me, Diana with whom I appeared together in so many venues side by side in the struggle to abolish torture and care for the victims. And more proof of “el relevo de generaciones”, the relay from one generation to another, using the phrase Cara just spoke, as how her organization continues the struggle that has not ceased over the last five hundred years of colonialism.

My elation at this changing and relieving and reliving of the guard, these new generations of compaňeros, is tempered by the thought that Orlando never got to meet his numerous and luminous grand-children – how can it be that I know them and he does not? – and the further sobering sorrow that Ronni never was able to have children. Ronni who loved music and wanted everyone in the world to have access to musical instruments. Ronni who cared so much for kids and taught the most underprivileged among them. Ronni who fought for peace so those children would have a world without war. Ronni who had just been promoted to be an IPS fund-raiser – and who, newly wed, had just treated herself to a new hairdo, as Isabel Morel de Letelier once told me. Ronni who was 25, four years older than Isabella Dorfman and ten years younger than Gabriel Kornbluh Loveluck.

I dwell so much on Ronni today because it is the mobilization today of young people like her, millions like here everywhere, from Hong-Kong to Belarus and Nicaragua, from Iran and Sudan to Honduras and Colombia, that give us hope that the world can be a better place. This is particularly so in Chile and in the United States, the two countries that met so fatefully at this Circle all those decades ago.

Because today, inside the building in Santiago that once housed the Chilean Congress, a Constitutional Convention has assembled, with the express purpose – ratified by more than 80 % of the Chilean electorate – of writing a new Constitution that will replace the one that Pinochet fraudulently pushed through in 1980. Orlando and Ronni would be thrilled by this Convention. Noteworthy is that it is presided over by Elisa Loncón, a Mapuche woman, embodying indigenous rights, a cause  central to the heart of Orlando’s widow and in which Eliana was so invested. And Elisa Loncón, by the way, has just been named by Time Magazine as one of the most influential leaders of the year.

The Convention is discussing how to inscribe in the new Magna Carta a series of rights, all of them so central to the struggles in Chile, in the United States, in the whole world: water and ecological rights, LGBTQ rights, health care and education and pensions that are meant to lift the majority and not enrich a small group of profiteers, the establishment of a pluri-national, multilingual republic, the end to police brutality, especially against the young, because it is always the young who get beaten and always the young who rise and rebel.

And, indeed, this is a rebellion of the young. The average age of the 155 delegates of the Convention is 44 years old. And 15 of those delegates, one tenth of the assembly, are not yet 30 years of age.

This youthfulness should not surprise us because it was students of Isabella’s age in Chile who sparked the revolt of October 2019 that led to this Convention being possible. And that road was paved in the preceding decade by youngsters who took to the streets to protest the discrimination and inequalities rampant in Chilean society and its educational system, who now make up the majority of the delegates to the Convention. In fact, one of those youthful leaders, Gabriel Boric, is today the main contender for the Presidency of Chile. If he is elected, Gabriel Boric will be the youngest President of Chile. He happens to be… 35 years old which happens to be Gabriel Kornbluh’s age. Talk about magic and coincidences, talk about the echoes and circles of history! Gabriel here y Gabriel allá!

Boric has taken up the flag of socialism and his hero, and mine, Salvador Allende, who named Orlando Ambassador in that building over there – the residence of the Chilean Ambassador in the States – where, think of it, Orlando ate and play the guitar and made love and brought up his four boys and negotiated with Nixon’s government over the terms of Allende’s recovery for the people of Chile of our resources and industries . And then Allende named Orlando as Minister of Foreign Affairs and finally Minister of Defense in the last months of the Unidad Popular government, a post where he got to know the servile, duplicitous, craven General Augusto Pinochet – no wonder Pinochet wanted to kill someone who knew who he was.

But what would really have warmed Orlando’s heart and heartened Ronni’s smile is that these protests, like so many in the United States today, the marches against poverty, the striving for racial equity, the call to address the ravages of climate desolation, the demand that funds be spent on people and not wars, all of which are being worked on by the Institute for Policy Studies, are squarely aimed at the neo-liberal order that was first enacted during the Pinochet dictatorship, when Chile became a laboratory for the Chicago Boys’ experiment at shock therapy, the destruction of the welfare state and social networks and trade unions. One week before he was murdered, in September 1976, Orlando wrote an essay in The Nation, where he made the direct link between the neo-liberal doctrine of the Chicago boys and the violence required to enact such policies against the wishes of the vast majority of Chileans. The free market economic of Milton Friedman necessitates constant repression and brutality against workers and dissidents. It was a crucial insight, which resonates today: terror is central to these policies.

What was valid for Chile then, is valid for the United States today – and the challenges remain the same. It is not merely wishful thinking, a mirage, to declare that the prophetic words of Orlando confirms that he lives on in so many ways and in so many struggles. Millions who do not even know his name are striving to create the world he and Ronni dreamt of.

It is worthwhile remembering that, at the time of the assassination, the governments of Chile and the United States were on excellent, indeed obscenely excellent, terms (like they are today, shamefully, between the United States and the corrupt regime in Honduras), indeed on such excellent terms back in 1976 that perhaps Pinochet’s agents felt that they had impunity to do whatever they wanted on the streets of the capital of a country so friendly to the dictatorship. Orlando, a Chilean citizen and Ronni, an American citizen, symbolized an answer to that indecent alliance with an alliance of their own that resisted both the Chilean dictatorship and the foreign policy of the United States. Orlando and Ronni were part of the same struggle, in Chile and the United States, for justice, freedom and equality. Justice, peace, dignity, the words that were chosen to go on the plaque that commemorates their murder in this Circle. And they were murdered because they dared to fight, to believe in Justice, Peace, Dignity.

I find it significant that the two young speakers who preceded me, Gabriel and Isabella, are themselves the product of America and Chile, Gabriel, the son of Eliana, a Chilean woman, and Peter, a U.S. man,  and Isabella, the daughter of  our son Rodrigo, a Chilean man and Melissa, a U.S. woman. Embodying, Gabriel and Isabella, how  that relationship and deep connection between the two countries and peoples continues to this day, new life circling ever forwards from the past.

One final note on the relationship between Chile and the United States.

A week ago was the twentieth anniversary of the terrorist attacks of September 11, 2001 – more than enough time to realize and denounce how mistakenly the United States reacted to that catastrophe. America’s actions – moved by fear, the desire for revenge, greed, a military-industrial complex, imperial arrogance – have been devastating for the world and devastating as well for the citizens of this country, with billions wasted on destroying foreign lands that could  have been spent on bettering the lives of so many here and abroad, as IPS has always insisted.

This blindness contrasts with how we, in Chile, reacted to our own September 11, resisting a dictatorship with primarily peaceful means, defeated Pinochet in a plebiscite, rebuilding our country in precarious and perilous conditions and, ultimately, finding a way to create a new Constitution which will insure full democracy, justice, peace, dignity, for our men, women and children.

This Circle, not far from the centers of power where such major decisions about the future of humanity are made, this Circle where the lives of two patriots, one Chilean and the other American, were joined by the fate they suffered, is an appropriate place to think about these two 9/11s and what we can learn about the two countries that endured such terror and how to make sure we do not repeat the errors of the past.

The first time I ever spoke at this commemoration, I read one of my poems, both in Spanish and in English.

Because its message is still relevant and expresses how absent and yet alive Orlando and Ronni are, I would like to read these poems again here today, but also as a homage to our dear Saul, to Marc and Dick, to Naúl Ojeda and Eliana, who stood by us in our moment of greatest need.

Last Will And Testament