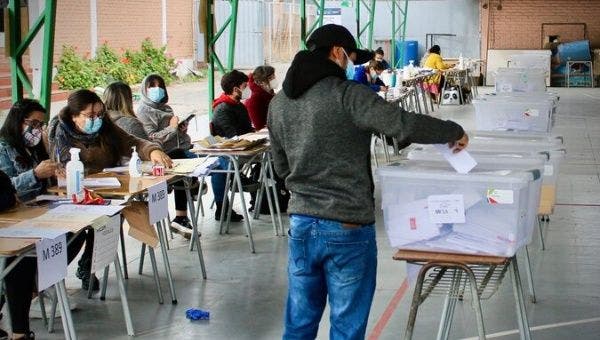 Above photo: For the second day in a row, polling stations reported a significantly low turnout, especially in the lower income districts of the country and among the younger people. @ChileTodayNews.

According to Chile’s Electoral Service (Servel), Chile’s right-wing has suffered a significant loss, as their Vamos por Chile list has only received 36 of the 155 seats at the constitutional convention—less than a quarter of the total.

While the nationwide results for governors, mayors and councilors will not be known until later Sunday night, and final results may not be known for another week, the vote for Chile’s constitutional convention has been tallied and announced this Sunday night.

In a surprise for Chile’s left and independent parties, the center-left Apruebo list has received 24 seats while the left-wing Communist-Broad Front Apruebo Dignidad list has finished in second with 28 seats.

The results come as a significant victory for leftist and anti-neoliberal forces in Chile and a significant setback for the government and right-wing parties who are explicitly against the process of drafting the country’s new constitution and incorporating significant changes into its guiding principles and socioeconomic model.

While the Vamos por Chile list did receive the highest number of votes (762.282), they had hoped to win at least a third, if not more, of the total number of seats to block significant progressive changes to be included in the new constitution.

Meanwhile, the anti-neoliberal forces of the Communist Party of Chile, the Frente Amplio, and other leftist parties of the Apruebo Dignidad list, responsible for the major social outburst of October 2019 that brought 1.2 million people out on the streets of Santiago and forced the creation of the constitutional convention in the first place, seem to be the mega-elections’ surprise winner, coming in second place.
Further information will be announced later Sunday night about elections for governors, mayors, and councilors. Still, a similar blow to Chile’s traditional right is expected as candidates from the Frente Amplio, and the Unidad Constituyente appear to lead their rivals from the right-wing Chile Vamos.