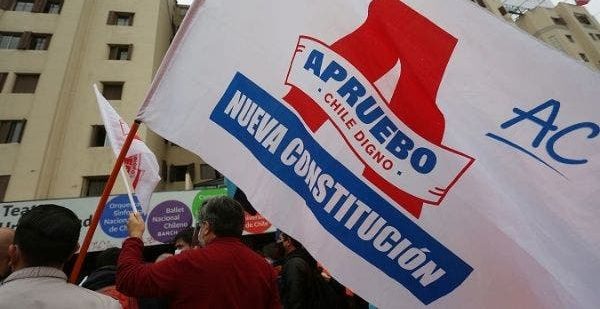 A month before the plebiscite, left-wing parties and organizations launched the I Approve Chile Digno initiative to promote an agreement regarding the new constitution.

Chile’s Communist Party (PC) will do everything it can to guarantee a victory in the upcoming referendum on Sunday 25, as the country gets ready to decide whether it remains with the current constitution created by Augusto Pinochet’s dictatorship or starts a brand new chapter of its history instead.

The CP President Guillermo Teillier told local media outlet  El Siglo that his party will support mobilization until the last day of permitted propaganda and encourage social organizations to do the same.

On Tuesday, Marcos Barraza, former minister of Social Development, warned that a plebiscite victory does not mean that the right is ultimately defeated, and it is up to the progressive forces to reflect social rights in a new constitution properly.

“Conchalí women with the deputy @KarolCariola they shout loud and clear: This Sunday all of us mark #Approve and #Constitutional Convention!”

The progressive forces, including the Communist Party, urge the people to choose the second option, which means a brand new constitution. On the other hand, conservative movements defend the first choice, meaning that the current constitution would only be slightly modified.

Barraza explained that one of the main strategies of the right is to present the plebiscite as a simple democratic exercise without a real impact on people’s lives while trying to dismiss the widespread demonstrations by infiltrating carabineros (Chilean police) among the protesters.

However, a month before the plebiscite, left-wing parties and organizations launched the I Approve Chile Digno initiative to promote an agreement regarding the new constitution, which would contain rights such as the implementation of the right to vote for adolescents over 16 years of age; the right to free, quality public education at all levels; the creation of a social security system, tripartite financing, universal coverage, intergenerational solidarity and gender equity and the end of the AFP (private pension fund) system.

The left-wing organization’s project also includes the right to health and sole solidarity fund of public and universal coverage, the right to work, employment stability, guaranteed collective rights, and more.