Chile: No More Murders, Torture, or Sexual Violence Against Protesters

Above: No More Torture, SOA Watch

On December 10, International Human Rights Day, School Of America’s Watch reiterates our deep condemnation of the brutal state violence and systematic human rights violations – murders, sexual violence, torture, and serious injuries – that the Chilean military and police are exercising against the protesting civilian population. Since October, protesters have been calling for a new Constitution and demanding that the State, led by President Sebastián Piñera’s government, end abusive neoliberal policies. 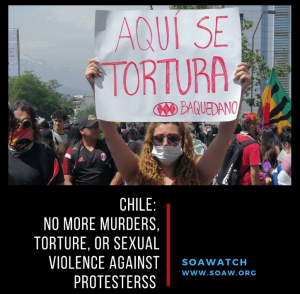 According to Chile’s Prosecutor General’s office, at least 23 people have died during the protests. The National Human Rights Institute (INDH) has filed 6 official manslaughter complaints before Chilean courts for cases where there are clear records that state agents killed these individuals. Additionally, more than 2,808 people have been injured during the demonstrations as a result of police or military brutality, and according to the INDH, the vast majority of these injuries are from bullets, pellets, and beatings.

Concerningly, numerous protesters have lost an eye as a consequence of the vicious state repression that seemingly targets their faces. As of November 30th, 241 people had officially reported serious eye injuries, and the New York Times even published an article called The head of Chile’s Medical College, Patricio Meza, stated, “Unfortunately in Chile, we have had a greater number of cases than in any situation of social unrest that has occurred in the world. The only world statistic that is a little closer to what we have seen in Chile is from Israel, where there were 154 patients with injured eyes, but in six years.”

As of December 3rd, the INDH had also filed 517 offical complaints of torture and cruel treatment, as well as 106 complaints of sexual violence. On November 25th, an effort to call out and organize against the Chilean State’s use of sexual violence,  an interdisciplinary women’s collective called LASTESIS led a mass mobilization in Santiago, where they performed a piece called “A Rapist on Your Path” and likened the oppressive state to a male rapist. This creative demonstration of resistance went viral, being replicated in numerous countries, and is a direct affront to the use of sexual violence by state forces and the Chilean police’s motto of “a friend on your path.”

Members of LASTESIS told El País that “many women detained in the protests see how the police and the State use sexual violence to sow fear and that women do not express themselves and exercise their right to protest.” The International Day for the Elimination of Violence Against Women (November 25th) was initially established in memory of the Mirabal sisters, who were brutally murdered in 1960 under the Rafael Trujillo’s dictatorship in the Dominican Republic.

It is important to note that the Chilean State is also prosecuting protestors. Chile’s Prosecutor General’s office reported that 30,102 people have been arrested and taken to Detention Control Hearings from October 18th through November 22nd. Of those arrested, 20,000 have been charged or formally accused of protest-related events, and 1,957 political prisoners have been held in pretrial detention.

US Training and Responsibility 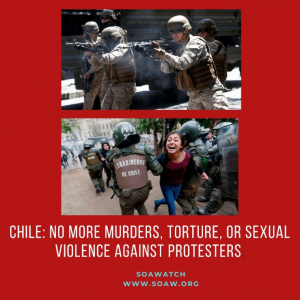 On October 18th, President Sebastián Piñera declared a State of Exception, thus militarizing the streets during the first 10 days of protests. For context, it is important to keep in mind that Chile is only second to Colombia in terms of the number of military and police personnel sent to train at the US Army’s. One of the demands of the Chilean organizations in the protest is an end to the training of Chilean state agents at the School of the Americas.

In Chile earlier this year, US Army Southern Command sponsored “Command Force” training exercises. Years ago, these exercises for Elite Special Forces were held in Guatemala for the Kaibil Special Forces Brigade, which has an abysmal human rights record.

We also denounce the training that the Carabineros Special Operations Group (GOPE) received in 2017 from US Special Forces under the pretext of Pope Francis’ visit to Chile. The Carabineros are heavily implicated in the ongoing violent repression against protesters. In 2018, 40 Chilean police officials received – a country with one of the worst human rights records in the Western Hemisphere. This course is supported by the US and developed in coordination with US Special Forces. This “anti-terrorist” or civilian-targeted warfare training has been under intense scrutiny and last year, a GOPE member murdered Camilo Catrillanca, a member of the Mapuche community.

At School of America’s Watch, we reject and denounce the logic of military and police training that targets civilian populations and teaches state forces to look at their own population as an “internal enemy”, the results of which are currently playing out in Chile and throughout the Americas.