Chile: People Come To This Square For Bread, Not Weapons

I was just in Chile, mostly Santiago, for two weeks. I decided to go for the funeral of a priest who invited me to work in Chile back in the 80s. Given the recent conflicts, the funeral was canceled, but I was happy to be back in Chile at such an important time. My godson, friends and I participated in a number of peaceful protests and spontaneous town halls (cabildos) where people gathered to outline what they want in a long over-due new constitution.

On November 14, Chile’s indigenous nations called for a day of peaceful solidarity, remembrance, and ritual in Santiago’s central square, which still bears its colonial name, Plaza de Armas (Weapons Square). It was the one-year anniversary of when police in the south of Chile killed a Mapuche man, Camilo Catrillanca. On all four sides of the square (about the size of two soccer fields) we counted and photographed no fewer than 40 heavily armed police in military-style riot gear and about five tear gas tanks and two water cannons. This was not for one of the bigger gatherings 10 blocks away in what the pro-democracy protesters now call Dignity Plaza. This massive show of force unlike anything I’ve seen in the US – supposedly to “keep the peace” – was for about 2000 people who gathered in front of the nation’s Catholic Cathedral in order to pray to the four directions, light candles, sing songs, fly flags and dance. I couldn’t imagine one of us, the celebrants, bringing a weapon to Weapons Square, but all of the police had shotguns loaded and ready – ready for what?

Sure, it was hot, so a few people were selling beer and we saw no more than a handful drinking. Sure, the statue of Chile’s colonial founder Pedro de Valdivia was ripe for mounting and covering his head with a Mapuche flag. Sure, the flag on Pedro’s smug mug was a primo backdrop for selfies. My 26-year-old godson was not at all as surprised as I was to learn that almost all Mapuche medicine men and grandmothers have cell phones and enjoy selfies as much as I do. 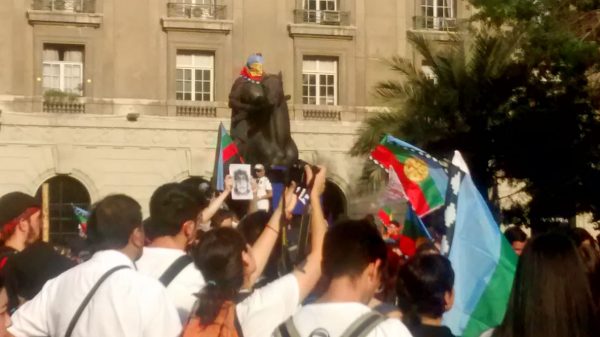 Leaving the good-natured fun of Pedro to others, we walked past the line of candles that went from Pedro across the Plaza to the Cathedral. We noticed the Cathedral doors were boarded up, similar to the doors of the nearby Starbucks and McDonalds and other targets of neoliberal/corporate power. I was surprised to see the Cathedral boarded up since it was where many of us turned to for refuge during the years of the Pinochet dictatorship.

At the main entrance of the Cathedral there was some commotion. Ten riot police were lined up – trigger ready – to “keep the peace”. An older civilian man with the familiar face of a hardworking farmer or shoe shiner from one of Santiago’s sprawling slums was standing at one end of the line of police as if he was a civilian on their side. He quietly held a picture in his hands. I moved closer to see it since it was not a big banner, but letter size. I thought it odd for him to be standing with the police, but he was really not “with” them. He held a picture of Camilo Catrillanca. No words on the picture. No words on his stone sober face. No words of protest on a tee-shirt. Just this sunburnt older man standing alongside the police, the setting sun bouncing off a nearby glass skyscraper right into his non-flinching eyes.

Then it all started. A row of younger celebrants stood face to face with the police. Evenly numbered, 10 to 10. Police armed for war. College-age celebrants, armed with words: “assassins”, “turn on your helmet cameras, it’s the law”, “our cameras film everything”, “join us, don’t fight us”, “we’re Chilean, just like you”, “we’re unarmed, just like Camilo”.

What sounded like an M-80 firecracker came from across the plaza, from Pedro, still mounted on his horse. Medicine men and old ladies taking selfies started to scramble. The young celebrants stood frozen for a second. The officer next to the silent old man spoke into his shoulder microphone, perhaps he gave the order. The 40 riot police all of a sudden seemed like 80. The celebrants rushed to gather their sacred branches, their candles, their blankets, their drums.

Just as I saw the water cannon coming for us, I turned to my godson and signaled, “we’re outta here”. The young celebrants scattered. “Walk, walk, walk and don’t run”, signaled me to do the opposite of what I had learned to do 30 years earlier. My PTSD was all of a sudden back, but luckily adrenaline kicked in and now I needed to get my godson and myself to safety. We chose the street directly behind a row of tear gas tanks, blindly trusting they didn’t operate in reverse. As we passed, they revved their engines and plowed forward into the plaza.

Before we turned a corner, I looked back. Everyone was scattering, walking, but scattering. Not everyone. The silent old man stood his ground. The police were no longer in a line next to him. They were clubbing anyone they suspected of resistance. There really was no resistance. The “front-line” resisters were busy protecting peaceful protesters at Dignity Plaza given ours was meant to be the most peaceful of peaceful gatherings. 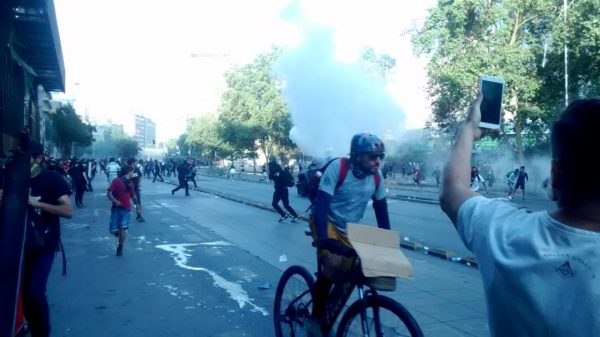 The silent man stood at the door of the Cathedral. Stood with his picture still held just above his waist. Stood as if he had nothing to lose. Stood, looking exhausted from a hard days’ underpaid work and likely a long commute to get to the celebration. The spray from a water cannon (now known to have poisonous chemicals) went right over his head, and he just stood there. I told my godson to wait a minute. We watched long enough to see he had made the choice he wanted to. He could walk away. He did not.

Later we learned there was a fair amount of resistance. The “front-line” had been called in, maybe by a Mapuche grandmother with a cell phone or one of the young celebrants that were calling out the police in front of the Cathedral. I don’t know the injury count, the lost eyes, the beatings, but I do know nobody was reported dead, unlike the next day when police shot two medics who were trying to resuscitate a young protester in cardiac arrest.

I don’t feel good about leaving the old man there, but I had promised my husband and myself I would stay clear of tear gas given my asthma and mild COPD (a likely remnant of living with daily tear gas for over a year back in the 80s). We all have our roles, our capacities and we make our choices. Also, I could swear my last sight of the old man included him standing there with something I didn’t see earlier – a proud and fearless smile on his face.

We walked a few blocks to the home of my godson’s cousin who met us on the street. He quickly showed-off the healing bullet wound in his hand, as if it were a new tattoo. Little did I know there was a pre-planned hand-off. From my godson’s shoulder bag came three home-made slingshots. Great. So much for my certainty that all celebrants in the Plaza de Armas were unarmed. Yet, on that day in that place of peaceful and sacred celebration, my godson chose not to use the slingshots. Not to be part of the “front-line”. The slingshots were meant for another time, another place, another person. And I guess I have to ask myself, what kind of arms are slingshots when up against what we saw back in the plaza? They’re used to keep the blinding bullets of police to a distance. Since October 18, government forces have shot over 350 protestors in the eyes, among even worse abuses of human rights including murder.

Since leaving Chile in 89, I’ve visited friends and family perhaps 7-8 times and whenever in Santiago’s Plaza de Armas I’m reminded of a conversation I had with a little boy selling bread. This was in 88, still under the Pinochet dictatorship. He asked if I’d buy a piece of bread. He couldn’t have been more than ten years old and had no shoes. I bought a piece of bread and then asked him, if you could change the name of this plaza, from Plaza de Armas (Weapons Square) what would you name it? He thought about it and pretty quickly answered, Plaza de Pan (Bread Square). Interesting, I thought. I asked, why.  He answered, “Because people come to this square for bread, not weapons.”