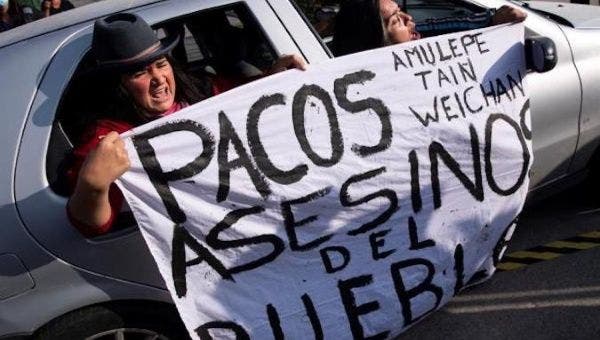 Chile’s political parties and social leaders on Monday demanded the dissolution of the Military police (Carabineros) three days after an agent shot dead juggler Francisco Martinez, 27, during an identity check.

“We demand the Senate to debate on the re-foundation of Carabineros,” Progressive Party (PRO) Senator Alejandro Navarro tweeted, recalling that police brutality is part of the “nefarious legacy” of Augusto Pinochet’s dictatorship (1973-1990).

Chile’s Communist Party (PC) Secretary Eduardo Artes also demanded the resignation of President Sebastian Piñera, “who has defended the Carabineros despite the brutality with which they have responded to the people’s protests.”

Martinez’s death, which took place on Friday, sparked a new wave of nationwide protests. This weekend, over 40 people were arrested amid the demonstrations.

Protestors are congregating once more in Chile after the fatal shooting of a street juggler by Carabineros on Friday – and now the alleged suicide of a 27-year-old in police custody.

Difficult times ahead unless the government rethinks its unwavering support for the Carabineros. https://t.co/oD86cfGhWr

The Carabinero who shot to death the young juggler was charged with simple homicide, and he will serve house arrest until the trial begins.

The social outrage rose after the alleged suicide of Camilo Miyaki, a man who was in police custody in the Pedro Aguirre Cerda  (PAC) community in Santiago.

“Miyaki was arrested for passing without a mask on his face. It is inexplicable that this situation ended with his death, especially under the police’s responsibility and custody,” PAC Mayor Juan Rozas said.

#Chile | The march was named “The eyes of the people accuse the terrorist state” in honor of the 352 Chileans who have lost total or partial eyesight.#SebastianPiñera #ChileEnCrisis #ChileViolaLosDDHH pic.twitter.com/RQtcxFf9BR