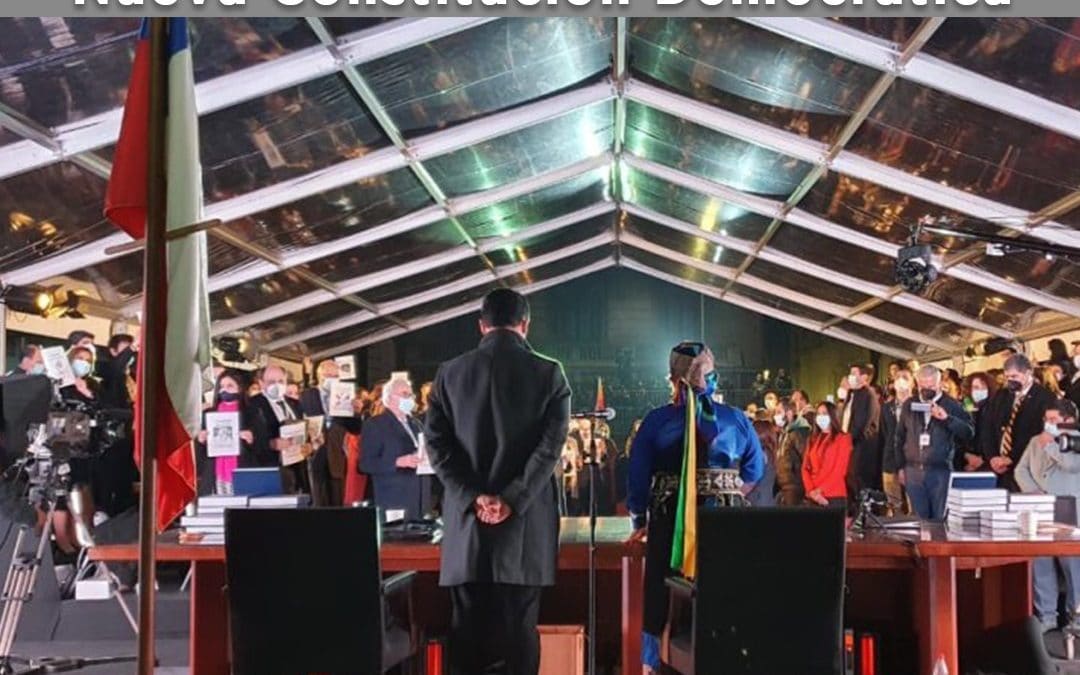 Above Photo: The Constitutional Convention of Chile meeting for the first time on July 4, 2021.

That October 18, 2019 was a blow that, in one fell swoop, brought down the deceptive façade of the conservative regime and inaugurated a new stage in the history of Chile. The enormous injustices maintained and deepened during the very slow (and failed) “democratic transition” initiated in 1990 were exposed. The explosive combination of free market without anesthesia and a democracy lacking in substance and completely delegitimized—thus becoming a rapacious plutocracy—was able to stay afloat thanks to the resignation, demoralization and apathy of the citizenry, skillfully induced by establishment politicians and the media oligarchy, partners of the ruling class. The spell was broken on October 18. The governmental response revealed the bloodthirsty nature of a regime that did not hesitate for an instant to fiercely repress popular protests in order to preserve the intangibility of its irritating privileges. The class nature of the regime was obscenely exposed before the eyes of a swindled and indebted citizenry, as well as the deceptions and ploys used by its oppressors to perpetuate themselves in power.

The persistence of the popular struggles against the government of Sebastián Piñera throughout these two years is inscribed in the most luminous pages of not only Chilean but also Latin American history. That is why it is a mistake to describe what happened on the foundational day of October 2019 as an outburst, as if it were an unusual lightning strike on a serene day. What happened, instead, was the maturation of a hidden but growing process of segmented and territorially dispersed struggles that, lacking a national coordination, were not visualized either by the government or by the opposition sectors in solidarity with the economic-political model inherited from the dictatorship.

Or, in case they were perceived, they grossly underestimated their scope and their deep roots in Chilean society. The repudiation of the Pinochetista constitution and the call for the Constitutional Convention is one of the external manifestations of these tectonic movements of the Chilean political system. And although the long and nefarious tradition of the Chilean right wing in the bad arts of manipulation and mockery of the popular will has been set in motion to castrate the critical edge that the new constitutional piece could have, the truth is that this move will hardly achieve its purpose. It may have some tactical victory, which remains to be seen, but in a social and political context that has changed in such a way that the institutionality itself, once unperturbed by the onslaught of civil society and the political forces of protest, is now much more exposed to the irruptions of social protest.

The changes in the correlation of forces among the main political formations in Chile are impressive. For the first time in at least a century, the extreme right has no presidential candidate. The favorite of the regime, Sebastián Sichel, is sinking without remedy to an unseemly fourth place. But we must not lower our guard because, in view of this situation, the Chilean right wing and US imperialism, historical partners if there are any, will unscrupulously appeal to all kinds of compromises in order to prevent a possible victory of the Frente Amplio. Will they succeed in such an infamous design? Not necessarily, especially if the formations of the heterogeneous popular camp act with strategic intelligence and a spirit of unity. If so, they will be able to frustrate the reactionary counter-offensive and finally manage to open those great avenues invoked in the moving final speech of President Salvador Allende.