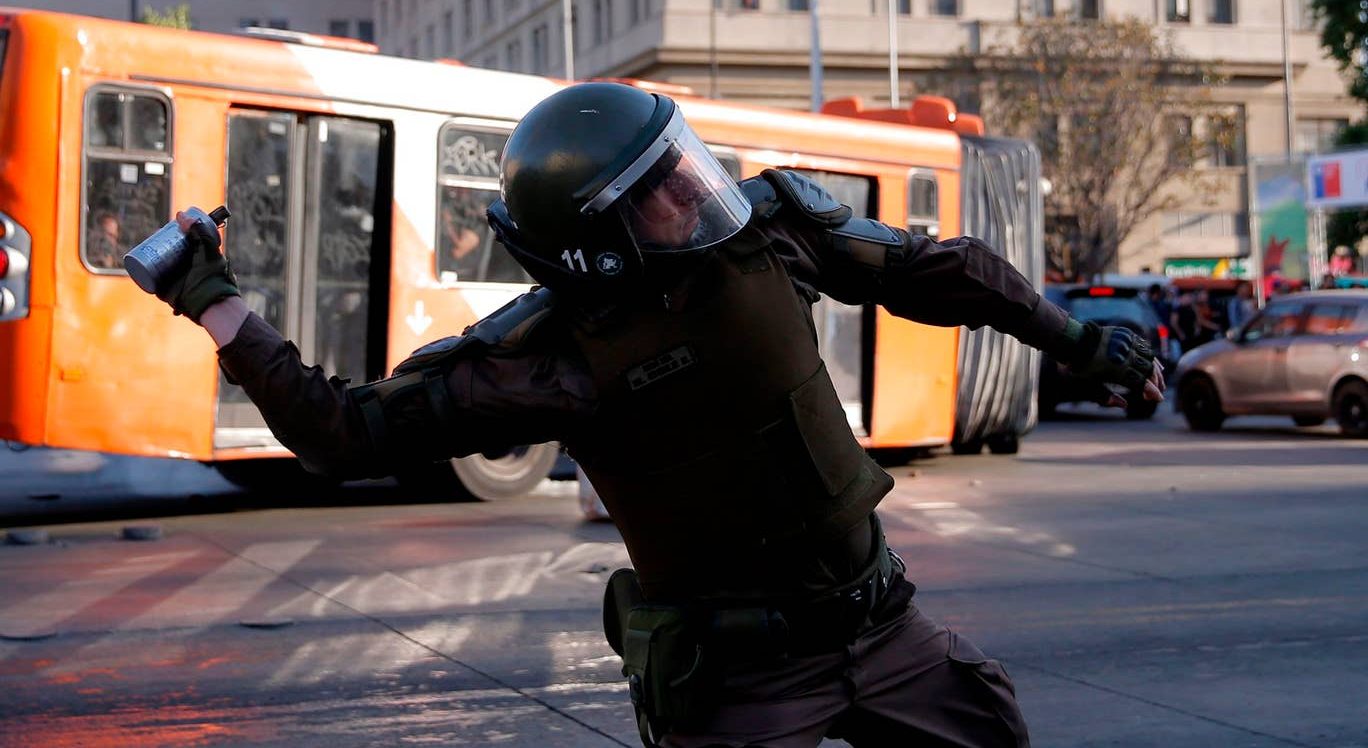 Above photo: A riot police throws a tear gas canister to demonstrators during clashes. AFP/Getty

You’ve heard about the violence in Chile. You probably haven’t heard their military learns its tactics in Israel.

In recent years, the IDF has seemingly used a tactic of maiming Palestinian protesters rather than shooting to kill — and that’s something we’ve seen reflected in Chile this week.

Chile – What started as a student act of civil disobedience against Santiago’s rising metro fares has now expanded outside the Chilean capital. In a sudden uprising against austerity and persistent economic inequality, a proposed fare increase (the equivalent of €0.02) was simply salt on an open wound for the poor and working-class citizens of Chile. Peaceful protests, when forcibly dispersed by the national police, have turned violent. The government, led by conservative billionaire President Sebastián Piñera, responded by declaring a state of emergency and calling in the military to quell protests, declaring that the state was “at war”.

While the military enforces brutality towards civilians not seen since the dictatorship that ended in the early 1990s, it is important to highlight the international connections to such brutality. The state of Israel’s tactical and resource-based military support in the past and present for Chile should be noted in particular.

During Augusto Pinochet’s US-supported regime, Chile witnessed tens of thousands of political adversaries imprisoned, killed, or disappeared. During these years, Israel and Chile had a collaborative relationship, as Israel was one of the main suppliers of arms to the military junta.

The dark era of Pinochet’s rule has some notable connections to the present. President Piñera, having appointed individuals to his cabinet who made comments defending Pinochet, has also worked to refine so-called “anti-terror” laws from the junta era. These laws have in turn increased surveillance and oppression of Mapuche and left-wing groups.

Today, the armed forces of both Chile and Israel make no attempts to hide their alliances, citing on the Chilean Embassy to Israel’s website the aims of “increasing the bonds with…Israel, in order to make knowledge, training and experiences exchange possible.” Chile and Israel signed an agreement in 2018 which spoke of encouraging further “cooperation in military education, training and doctrine” during Israeli General Yaacov Barak’s visit to Chile that year.

While this alliance is known to benefit the military power of both countries, those who are affected the most negatively are the working class and Indigenous people of both regions. In Israel, Palestinians suffer under a system of occupation and apartheid, and in Chile, the working class and Indigenous groups, such as the Mapuche, have experiences centuries of colonial-based oppression.

In recent years, the Israeli Defence Force (IDF) has seemingly used a tactic of maiming Palestinian protesters rather than lethally shooting them. For more than a year now, Palestinian civilians have marched towards the Gaza wall in protest of Israeli occupation, and the IDF has shot nearly 60 per cent of these 10,511 civilians in the lower limbs, with more than 90 per cent of casualties coming from live ammunition.

During the past week, these Israeli tactics have been used on Chilean civilians on multiple reported occasions. One woman has been shot in the thigh and was reported in critical condition due to excessive bleeding. In another, a 23-year-old man was shot in the leg before a military vehicle crushed him to death.

These similar tactics are no coincidence, and are internationally a part of what activist groups such as Jewish Voice for Peace have named “the deadly exchange”. In the United States, municipal police, ICE agents, and other security agents routinely train alongside the IDF, sharing tactics and weaponry that can encourage racial profiling, extrajudicial killings, and increased surveillance on both countries’ most marginalized groups.

Emilio Dabed, a Palestinian-Chilean lawyer, has laid out the connections before, writing: “In both cases, Palestinians and the Indigenous population in Chile live in a state of exception imposed on them by the colonizers, and under which the colonized people are [seen as] neither citizen-holders of rights nor political subjects but rather a threat — bodies [to be] ruled by violence that is normalized in law.”

The Israeli arms which forcibly kept Pinochet in power were used disproportionately on the Mapuche, who had supported left-wing efforts such as the election of socialist Salvador Allende in 1970. Today many Indigenous people are taking part in the demonstrations, and have become many of the casualties at the hands of the military.

Outside of Chile and Israel, it’s important that we call out military partnerships that perpetuate the oppression of marginalized indigenous people. Such ties between the IDF and other countries’ armed forces should be investigated and questioned. Further militarization of communities does not produce peace, but further brutality and injustice — and it’s time we talked about why we’re ignoring that fact.