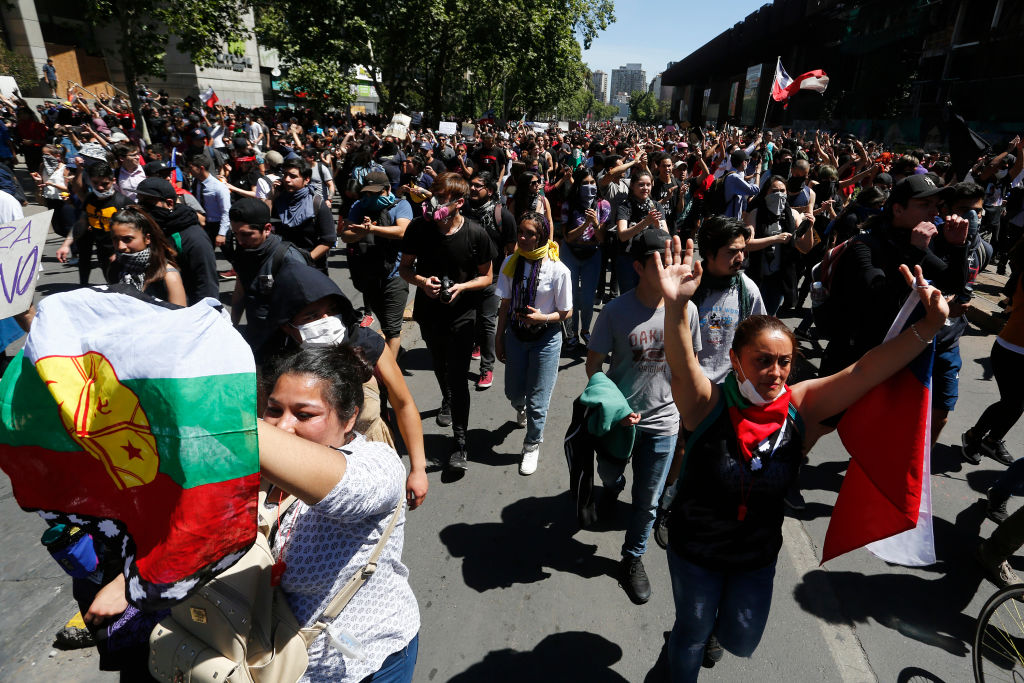 Chileans Have Launched A General Strike Against Austerity

Above Photo: Demonstrators wave flags during a protest against President Sebastian Piñera on Monday in Santiago. (Marcelo Hernandez / Getty Images)

Chile is the original home of neoliberalism, first begun after the overthrow of President Salvador Allende in 1973. If you listen closely to mass protests on the streets today, you can hear Allende’s last words: “The people must defend themselves.”

In Chile’s main cities, armed forces and tanks are filling the streets. But civilians are holding their ground, refusing to abandon public space. Official reports indicate eleven fatalities so far, though there are indications that the number is higher. The president has taken to national television to announce that the country is “at war with a powerful enemy who is willing to use violence without any limits.” There are blackouts all across the country. This is October 2019, but it could just as easily be 1973, when socialist president Salvador Allende was overthrown in a coup, replaced with dictator Augusto Pinochet.Last Saturday, the right-wing president, Sebastían Piñera, decreed a curfew in Santiago that would soon extend to other regions and cities across the country. He has since granted expanded powers to the chief of the national armed forces, Javier Iturriaga, who he has charged with reestablishing order. In this state of emergency, Piñera has effectively banned the right to assembly — a measure not seen since the days of Pinochet.

Despite these strongman measures, a pluri-national (in recognition of Chile’s indigenous communities) general strike is now in full swing across the country. A new day of mass protests is expected tomorrow.

The spark that lit the fire was a fare hike in Santiago’s subway in response to Chile’s incredibly expensive transit systems, some of the most expensive in the world. A student-led movement responded with a campaign of fare-dodging, which quickly spread to the wider population and was successful in crippling one of the capital’s primary strategic services.

The fare hikes came on the heels of a general increase in the cost of basic services, foisted on the Chilean people with routine arrogance. Chile’s transport minister haughtily suggested that commuters “just wake up earlier.”

Chile’s protest movement is taking to the streets just days after the popular, if partial, victory in Ecuador against the International Monetary Fund–imposed adjustment program. Despite the widespread idea that Chile is a stable democracy driven by a healthy economy — an image cynically forged to act as a counterpoint to other South American nations — the reality is quite different. It is a nation that has suffered the lash of neoliberal capitalism just as much as, if not more than, its neighbors in Ecuador, Brazil, Argentina, and Peru.

Chile is the original and perpetual laboratory for neoliberalism, with more than thirty years of economic shock policies under its belt and a steady, low-intensity war waged against the nation’s popular classes. The infamous Chicago Boys — the University of Chicago–trained economists who were so influential in spreading neoliberal measures during the Pinochet regime — are still at work. And Milton Friedman, who knew a thing or two about creating widespread crisis as a pretext for suspending democratic mechanisms, remains a key reference point.

These same forces now have new tools at their disposal. As in other Latin American countries, the Right has weaponized social media to declare war against a sector of Chile’s own population, which they label as “vandals,” “criminals,” and even “lumpens.” Such attacks are pitched to those communities who are already feeling vulnerable. Piñera’s is a cynical tactic intended to instill the idea that peace can only be established via war. In this context, police have in the last days made fifteen hundred arrests; eighty-five people have been injured. Civil society organizations estimate that fifteen people have been killed, though the number could easily be higher.

Chileans have been widely criminalized by this government. To take just one example, Piñera’s government recently approved a bill to install a significant police presence both in primary and secondary schools. It is no surprise that high school students have taken the lead in the fare-evasion movement.

This week’s uprising is in some ways a reprise of the 2011 mass mobilizations in the country in favor of public, non-denominational, free education. Though it seemed then that authorities had successfully defused the movement, it is now apparent that those forces have been gathering strength, working to combat the intensified conditions of precarity, privatization, and dispossession.

The conflict unfolding today in Chile, against the backdrop of martial law, is the expression of a society that has reached a breaking point. Chileans are exhausted. For years they have been waiting for justice, democracy, peace, and a dignified standard of living. Neoliberal administrations have responded with fragmentation, cooptation, and the technical management of general social distress. And still, in the weeks leading up to the latest crisis, Piñera had the audacity to refer to Chile as “an oasis of stability and democracy,” revealing his own confidence in the face of the country’s acute political and economic crises.

Unlike the more restrained movement of 2011, the demonstrations of 2019 cannot be so easily contained. In cities across the country, the curfew is being resisted. Even the government’s decision over the weekend to revoke the transport price hikes has not deterred protestors; it appears instead to have fanned the flames, with protests only spreading further. Amid the familiar chant, “El pueblo unido jamás será vencido,” new slogans can now be heard: “the curfew can stay at the Alameda” (an allusion to the address of the presidential Palacio de la Moneda) and “evade, don’t pay, struggling in a new way.”

The Chilean right — a bloc encompassing the government, the business class, the military, and the corporate media — marches in lockstep in its neoliberal pursuits. Nonetheless, this week’s mobilizations are enjoying popular legitimacy and find support from various unions and social movements, among them the trade union of subway workers (and other branches of public transportation), as well as port workers. In addition to calling for subsidized train fares, the subway workers’ union has called for the outright nationalization of public transportation.

A new social bloc that includes trade unions, student, feminist, and environmentalist groupings have proposed a set of demands that is “transversal” (non-sectoral) and extends across the whole nation. In addition to calling for Piñera’s resignation, among the protesters’ demands are a call for pay rises and cheaper basic services, a forty-hour week, the restoration of union rights and sectoral collective bargaining, the nationalization of both public services and strategic energy sectors, student-debt forgiveness, the annulment of the country’s private-sector pension fund, the cancellation of the odious free market “water codes” signed into law by Pinochet in 1981, progressive tax reform, and a new migration policy. Perhaps most dramatically, the demonstrators are calling for a new constitution to be drafted by the Constituent Assembly.

The scenario is still unfolding unpredictably. Additional curfews are announced daily, flights have been cancelled, services and workplaces shuttered. Staring down an increased military presence on the streets, people are continuing to resist the curfew, and the ranks of workers joining the general strike continues to swell. As a result, the main trade unions and civil-society organizations are joining the call for tomorrow’s general strike.

If one listens closely on the streets today, one can make out the echo of the last words of Salvador Allende: “The people must defend themselves, but they must not sacrifice themselves. The people must not let themselves be destroyed or riddled with bullets, but they cannot be humiliated either.”