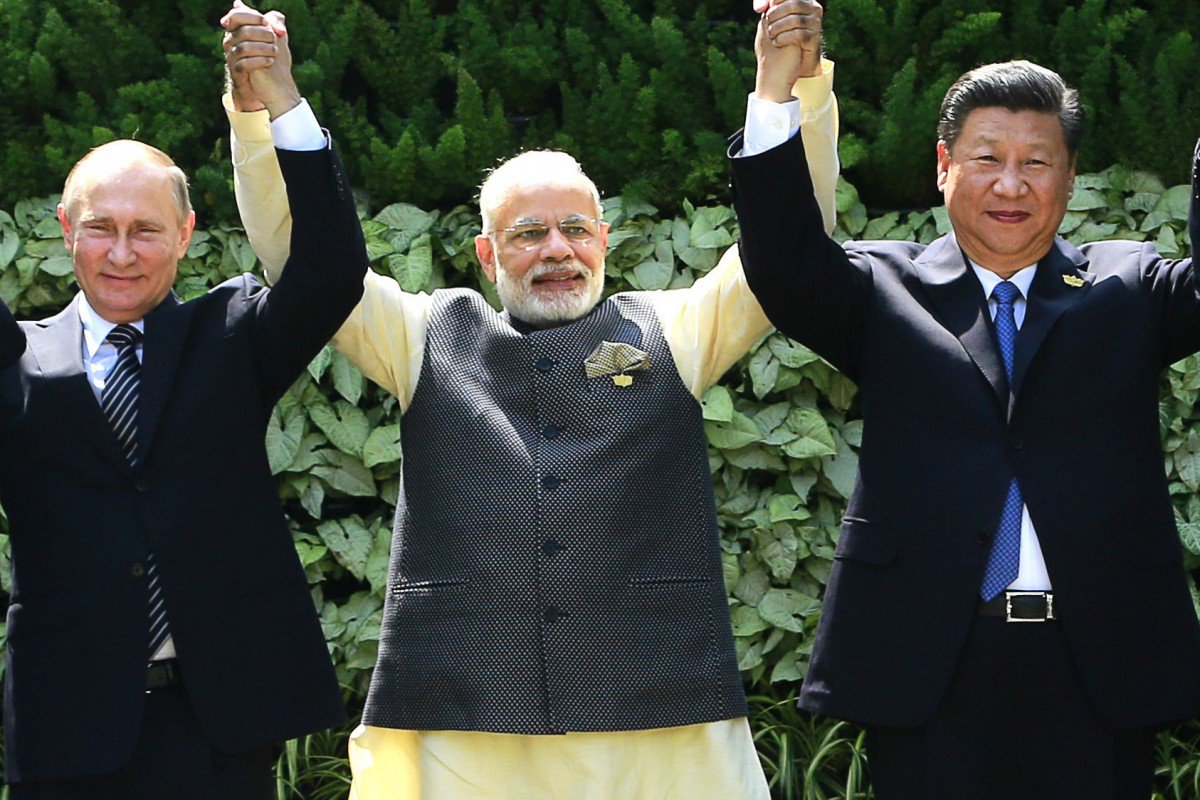 Above Photo: Vladimir Putin, Narendra Modi and Xi Jinping at a summit in India in 2016. Photo: AP

China hopes to win Indian and Russian support in establishing a “new type” of “rules-based” and “multilateral” trade initiative.

The summit comes ahead of an expected meeting between Xi and Trump at the G20 summit in Japan, where they are expected to hold talks aimed at resolving their trade dispute.

However, the confrontation between the United States and China has expanded into a number of other areas, such as technology and geopolitics.

Trump has threatened to impose further trade tariffs if Xi refuses to meet him in Osaka and the US president has asked its allies to help contain China.

In response, China has also been seeking support from other countries – including Russia, which Xi visited last week to affirm his closeness to Putin, whom he described as his “best friend”.

India is one of the many countries that has expressed concern about the impact of the White House’s protectionist policies, leading to the expectation that it will use the Shanghai Cooperation Organisation platform to express its stance.

The Beijing-led organisation, known as the “alliance of the East”, is intended to provide an alternative platform for political, economic and security cooperation to those led by the US or other Western nations, and India became a member two years ago.

“The SCO summit will be an opportunity for China to solidify ties with [New Delhi] and a new proposal for a multilateral trading system could be a way to strengthen relations with India, which is also targeted by Trump’s trade policies,” Zhang Baohui, director of the Centre for Asian Pacific Studies at Lingnan University in Hong Kong, said.

“Due to the trade war with the US and the broadening strategic rivalry between them, China would like to improve relations with other countries, including both Russia and India.”

Rajeev Ranjan Chaturvedy, a visiting fellow at the S. Rajaratnam School of International Studies at Nanyang Technological University in Singapore, said India’s concerns about Trump’s protectionist policies “are related to problems encountered by its IT services [sector], the imposition of tariffs on steel and aluminium, agriculture products and intellectual property rights”.

“Trump’s recent move in withdrawing the Generalised System of Preferences (GSP) trade status given to India three decades ago is an immediate concern for India,” Chaturvedy said.

“India would like to get trade in services, [the] knowledge economy and greater market access included as part of such agreements.

“Technology transfer, data localisation are some other important areas where India needs to protect its interests.”

Other analysts noted that India’s main goal was to maintain a balance – both economic and strategic.

Sampa Kundu, an assistant professor at Symbiosis School of International Studies in India, said that despite the differences between the two countries, “both China and India understand the importance of each other, both at the regional level and at the international level … Both are significant stakeholders in Asian politics, as well as in global geopolitical affairs.”

“The upcoming SCO summit may play an important role in strengthening India’s relations with the regional and global powers,” Kundu added, but said it was likely that the country would continue to support the US policy of containing China as part of its free and open Indo-Pacific strategy.

It is also unclear how practical it would be to replace the current US-led trade system with the new platform to be announced at the summit.

“Neither Russia nor India are significant trading powers in the global economic system,” Zhang said.

“Many [economically advanced] countries, major European economies and Japan, have voiced their concerns about the Trump administration’s unilateral approach too, but they want to shore up the WTO multilateral system, not start something totally new.”