Above Photo: A military vehicle carries an unmanned aerial vehicles (UAV) past Tiananmen Square during the military parade marking the 70th founding anniversary of People’s Republic of China, on its National Day in Beijing, China October 1, 2019. REUTERS/Jason Lee

The Days of US military supremacy have come to an end. We have written about the issue of Russia’s technological superiority to the United States when it comes to the military and why this requires a rethinking of US-Russia relations and dialogue with Russia. At a fraction of the cost, Russia has made major advancements in weapons, well-described in the article below, that put US military strategy in question, e.g. the expensive US Navy-based aircraft carrier strategy no longer makes sense. In addition to this military checkmate, Russia is moving to end US dollar domination.

The article below describes how China has also now created weapons that will be difficult for the US and its allies, like Japan, will have a difficult time overcoming. China spends $170 billion of its military, while the US spends more $1 trillion and yet China is creating weapons with technical and strategic superiority to the US. The US should stop the arms race with Russia and China now as spending hundreds of billions more on weapons will not make the US superior or secure. The US will still not be able to win a war in a great power conflict. It is time to recognize the limits of a military-based foreign policy and move to a diplomacy based foreign policy. Rather than seeking to be the greatest military power on Earth, the US should become the greatest humanitarian power in the world. This will bring great security to the US and to the world.  KZ

BEIJING (Reuters) – China’s military on Tuesday showed off new equipment at a parade in central Beijing to mark 70 years since the founding of the People’s Republic, including hypersonic-glide missiles that experts say could be difficult for the United States to counter.

In a speech at the start of the nearly three-hour, highly choreographed spectacle, Chinese President Xi Jinping said that his country would stay on the path of “peaceful development,” but that the military would resolutely safeguard the country’s sovereignty and security.

China says the parade, the country’s most important political event of the year, which featured more than 15,000 troops marching through part of Tiananmen Square as jet fighters trailing colored smoke soared overhead, is not meant to intimidate any specific country.

But defense experts see it as a message to the world that China’s military prowess is growing rapidly, even as it faces mounting challenges, including months of anti-government protests in Hong Kong and a slowing economy.

A state television announcer called the missile arsenal a “force for realizing the dream of a strong nation and strong military.”

Among the weapons were the “carrier killer” Dongfeng-21D (DF-21D), unveiled at military parade in 2015, designed to hit warships at sea at a range of up to 1,500 kilometers, and the DF-26 intermediate range missile, dubbed “Guam killer” in reference to the U.S. Pacific island base.

The People’s Liberation Army (PLA) also rolled out a hypersonic missile, known as the DF-17, which theoretically can maneuver sharply at many times the speed of sound, making it extremely difficult to counter.

A military vehicle carries an unmanned aerial vehicles (UAV) past Tiananmen Square during the military parade marking the 70th founding anniversary of People’s Republic of China, on its National Day in Beijing, China October 1, 2019. REUTERS/Jason Lee

Nozomu Yoshitomi, professor at Japan’s Nihon University and a retired major general in Japan’s Ground Self-Defence Force, said the DF-17 posed serious questions about the effectiveness of the regional missile defense system the United States and Japan are building.

“There is a possibility that if we do not acquire a more sophisticated ballistic missile defense system, it will become impossible for both the United States and Japan to respond,” Yoshitomi said.

Bringing up the rear of the ground parade were 16 upgraded launchers carrying DF-41 intercontinental ballistic missiles, which are the backbone of China’s nuclear deterrent, capable of reaching the United States with multiple nuclear warheads.

State media said 40% of the arms shown in the parade were appearing in public for the first time. Such hardware included new and revamped versions of missiles, such as the long-range submarine-launched and ship-based YJ-18A anti-ship cruise missiles, the official Xinhua news agency said.

China has a practice of only displaying systems in parades it says have entered some form of service, though analysts have cautioned that some of the new equipment could be experimental or prototypes.

For instance, the Gongji-11, described by the state-controlled Global Times as an attack drone and the “final version” of the Sharp Sword drone that first flew in 2013, was displayed for the first time on the back of a truck.

Many modern Western militaries eschew elaborate, large-scale military parades as costly extravagances and argue such events have almost no value for war beyond a possible boost to morale.

Still, governments around the region and foreign military experts watched the parade closely for signals about China’s military achievements, looking for clues about weapon capabilities and evidence of new systems. 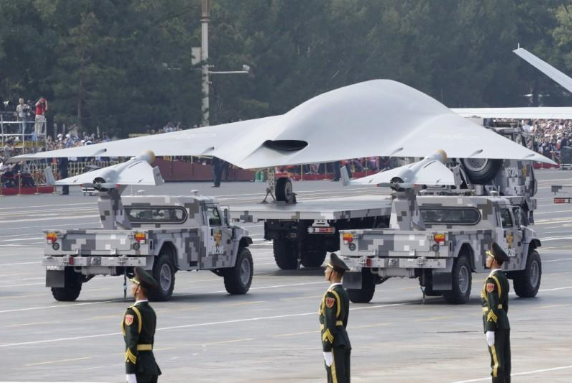 The government of the self-ruled island of Taiwan, which China claims as its territory, said in response to the parade that China was a serious threat to peace and democracy.

As a part of what Chinese military officials said would be a focus on command structure reforms under Xi’s ambitious military reorganization, hundreds of personnel from the PLA’s new Joint Logistics Support Force, Strategic Support Force, and Rocket Force marched in their national day parade debuts.

Xinhua also said there were two female major generals participating in the parade for the first time.

Analysts see progress in combined operations between branches of the military and in mechanizing its forces as a shift in priorities from defending Chinese borders toward having expeditionary forces able to defend the country’s far-flung commercial and diplomatic interests.

Many said the show of force was a reminder to the United States and its allies at how far the PLA has come.

Sam Roggeveen, the director of the Sydney-based Lowy Institute’s International Security Program, said the pace of China’s military technological development was “breathtaking” and that with defense spending thought to be around 2% of GDP, “they’re not breaking a sweat.”

“The message is pretty blunt. It dramatically erodes the U.S. military edge is Asia, and over the long-term, America’s military primacy in Asia is clearly under threat,” Roggeveen said. 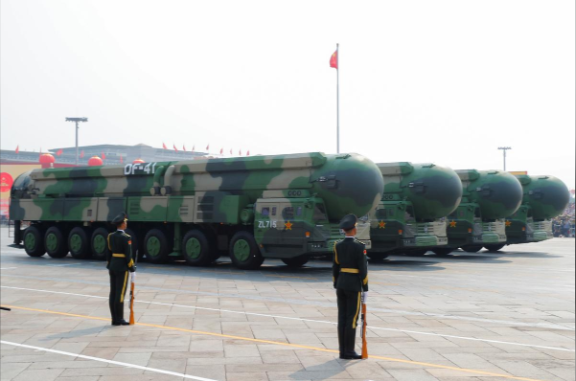