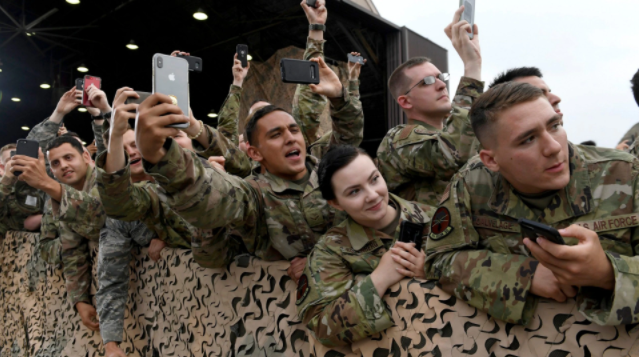 Above Photo: Troops are stationed across Asian countries, including at Osan Air Base in South Korea CREDIT: AP PHOTO/SUSAN WALSH

November 19, 2019 “Information Clearing House” –  The defence ministers of South Korea and China have agreed to develop their security ties to ensure stability in north-east Asia, the latest indication that Washington’s long-standing alliances in the region are fraying.

On the sidelines of regional security talks in Bangkok on Sunday, Jeong Kyeong-doo, the South Korean minister of defence, and his Chinese counterpart, Wei Fenghe, agreed to set up more military hotlines and to push ahead with a visit by Mr Jeong to China next year to “foster bilateral exchanges and cooperation in defence”, South Korea’s defence ministry said.

Seoul’s announcement coincided with growing resentment at the $5 billion (£3.9bn) annual fee that Washington is demanding to keep 28,500 US troops in South Korea.

That figure is a sharp increase from the $923 million that Seoul paid this year, which was an 8 per cent increase on the previous year.

An editorial in Monday’s edition of The Korea Times warned that the security alliance between the two countries “may fall apart due to Washington’s blatantly excessive demands”.

Mr Trump has previously threatened to withdraw US troops if his demands are not met, with the editorial accusing the president of regarding the Korea-US mutual defence treaty “as a property deal to make money”.

The vast majority of Koreans agree, with a recent survey by the Korea Institute for National Reunification showing that 96 per cent of people are opposed to Seoul paying more for the US military presence.

There is also irritation at the pressure that Washington is applying to the South to make Seoul sign an extension to a three-way agreement on sharing military information with the US and Japan.

The General Security of Military Information Agreement is due to expire at midnight on November 23 and South Korea insists that it will only agree to an extension if Japan cancels restrictions on exports of chemicals critical to the South’s microchip industry.

Japan is widely believed to have imposed the restrictions as the latest incident in its troubled relationship with South Korea, which includes the issue of compensation for labourers put to work during Japan’s colonial rule of the Korean Peninsula.

The two nations’ defence ministers held discussions with Mark Esper, the US defence secretary, at the weekend but hopes that a breakthrough might materialise came to nothing.

Just days before an agreement designed to protect the allies from North Korean belligerence runs out, Tokyo and Seoul merely reiterated their long-held positions.

The US demanded in July that Japan pay $8 billion a year to keep 54,000 US military personnel in the country, Foreign Policy reported late last week.

Tokyo currently contributes $2 billion a year to US military costs in Japan.

“This kind of demand, not only the exorbitant number, but the way it is being done, could trigger anti-Americanism”, Bruce Klinger, an analyst at the Heritage Foundation think tank, told Foreign Policy.

“If you weaken alliances, and potentially decrease deterrence and US troop presence, that benefits North Korea, China and Russia, who see the potential for reduced US influence and support for our allies”.

Daniel Pinkston, a professor of international relations at the Seoul campus of Troy University, was more blunt in his assessment.

“It’s just extortion”, he told The Telegraph. “It’s little more than a mob boss going around and demanding protection money. The numbers that the US is demanding are politically impossible for Seoul and Tokyo to swallow and that is just fuelling resentment.”