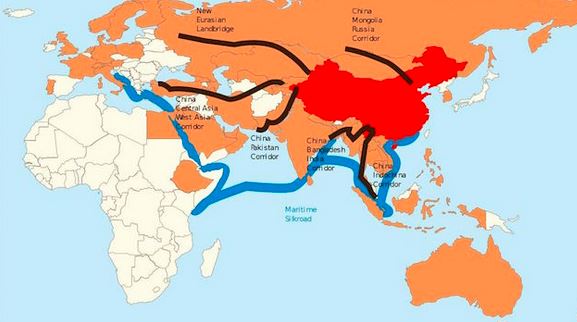 Connecting Asia with Europe through the Middle East and Africa will become the dominant economic engine of the 21st Century. China’s goal is a win-win for all participating nations. The US economic, military and political power will no longer be dominant. It will no longer be a unipolar world. The Belt and Road Initiative is very threatening to the US. We should expect to see the US do all it can to prevent it or disrupt it. KZ

November 24/25, 2019 “Information Clearing House” –   The Belt and Road Initiative (BRI), also called the New Silk Road, is based on a 2,100-year-old trade route between the Middle East and Eastern Asia, called the Silk Road. It wound its ways across the huge landmass Eurasia to the most eastern parts of China. It favored trading, based on the Taoist philosophy of harmony and peaceful coexistence – trading in the original sense of the term, an exchange with “win-win” outcomes, both partners benefitting equally.

Today, in the western world we have lost this concept. The terms of trade are imposed always by the ‘stronger’ partner, the west versus the poorer south – the south where most of the natural resources are lodged. Mother Earth’s assets have been and are coveted by the west – or north – for building and maintaining a lifestyle in luxury, abundance and waste. This trend has lasted for centuries of western colonialism: Exploitation, loot, esclavisation and rape of entire peoples of the Global South by the Global North, to use the current soothing World Bank lingo.

The New Silk Road, or BRI, is Chinese President Xi Jinping’s brainchild. It’s based on the same ancient principles, adjusted to the 21st Century, building bridges between peoples, exchanging goods, research, education, knowledge, cultural wisdom, peacefully, harmoniously and ‘win-win’ style. On 7 September 2013, Xi presented BRI at Kazakhstan’s Nazarbayev University. He spoke about “People-to-People Friendship and Creating a better Future”. He referred to the Ancient Silk Road of more than 2,100 years ago, that flourished during China’s Western Han Dynasty (206 BC to 24 AD).

Referring to this epoch of more than two millenniums back, Xi Jinping pointed to the history of exchanges under the Ancient Silk Road, saying,

“they had proven that countries with differences in race, belief and cultural background can absolutely share peace and development as long as they persist in unity and mutual trust, equality and mutual benefit, mutual tolerance and learning from each other, as well as cooperation and win-win outcomes.”

President Xi’s vision may be shaping the world of the 21st Century. The Belt and Road Initiative is designed and modeled loosely according to the Ancient Silk Road. President Xi launched this ground-breaking project soon after assuming the Presidency in 2013. The endeavor’s idea is to connect the world with transport routes, infrastructure, industrial joint ventures, teaching and research institutions, cultural exchange and much more. Since 2017, enshrined in China’s Constitution, BRI has become the flagship for China’s foreign policy.

BRI is literally building bridges and connecting people of different continents and nations. The purpose of the New Silk Road is “to construct a unified large market and make full use of both international and domestic markets, through cultural exchange and integration, to enhance mutual understanding and trust of member nations, ending up in an innovative pattern with capital inflows, talent pool, and technology database”. BRI is a perfect vehicle for building peacefully a World Community with a Shared Future for Mankind – which was the theme of an international Forum held in Shanghai, from 5-7 November, a tribute to China’s 70th Anniversary of her Revolution and achievements – with a vision into the future.

BRI is a global development strategy adopted by the Chinese Government. Already today BRI has investments involving more than 150 countries and international organizations – and growing – in Asia, Africa, Europe, the Middle East and the Americas. BRI is a multi-trillion investment scheme, for transport routes on land and sea, as well as construction of industrial and energy infrastructure and energy exploration – as well as trade among connected countries. Unlike WTO (World Trade Organization), BRI is encouraging nations to benefit from their comparative advantages, creating win-win situations. In essence, BRI is to develop mutual understanding and trust among member nations, allowing for free capital flows, a pool of experts and access to a BRI-based technology data base.

At present, BRI’s closing date is foreseen for 2049 which coincides with new China’s 100th Anniversary. The size and likely success of the program indicates, however, already today that it will most probably be extended way beyond that date. It is worth noting, though, that only in 2019, six years after its inception, BRI has become a news item in the West. Remarkably, for six years BRI was as much as denied, or ignored by the western media, in the hope it may go away. But away it didn’t go. To the contrary, many European Union members have already subscribed to BRI, including Greece, Italy, France, Portugal – and more will follow, as the temptation to participate in this projected socioeconomic boom is overwhelming.

Germany, the supposed economic leader of Europe, is mulling over the benefits and contras of participating in BRI. The German business community, like business throughout Europe, is strongly in favor of lifting US-imposed sanctions and reconnecting with the East, in particular with China and Russia. But official Berlin is still with one foot in the White House – and with the other trying to appease the German – and European – world of business. This balancing act is in the long run not sustainable and certainly not desirable. At present BRI is already actively involved in over 80 countries, including at least half of the EU members.

To counteract the pressure to join BRI, the European Union, basically run by NATO and intimately linked to Washington, has initiated their own ‘Silk Road’, attempting to connect Asia with Europe through Japan. In that sense, the EU and Japan have signed a “free trade agreement” which includes a compact to build infrastructure, in sectors such as energy, transport and digital devices. The purpose is to strengthen economic and cultural ties between the two regions, boosting business relations between Asia and Europa. It is an obvious effort to compete with or even sideline China’s BRI. But it is equally obvious that this response will fail. Usually initiatives taken in ill-fate are not successful. And China, non-belligerent China, is unlikely to challenge this EU-Japan competitive approach.

It is not clear how the BDN will interact with or counteract BRI. Anything run entirely by the private sector, especially western private banking, is no good omen for the country their “development effort” touches. Such investments’ objectives are primarily shareholder profits, not socioeconomic development benefitting the countries where they plan to invest. No competition for China’s BRI. Again, non-aggressive China is unlikely to react.

China’s New Silk Road is creating a multipolar world, where all participants will benefit. The idea is to encourage economic growth, distributed in a balanced way, so as to prioritize development opportunities for those most in need. That means the under-developed areas of western China, eastern Russia, Central Asia, Central Europe – reaching out to Africa and the Middle East, Latin America, as well as to South East Asia and the Pacific. BRI is already actively building and planning some six to ten land and maritime routes, connecting Africa, the Middle East, Europe and South America.

The expected multi-trillion-dollar equivalent dynamic budget is expected to be funded by China, largely, but not exclusively, by the Asian Infrastructure and Investment Bank (AIIB), by Russia – and by all the countries that are part of BRI and involved in singular or multi-country projects. The long-term return on these massive investments in people’s wellbeing is an exponential multiple of the original investments and cannot be limited to numerical economics, as social benefits of wellbeing cannot be defined by linear accounting.

Implementing BRI, or the New Silk Road, is itself the realization of a vision of nations: Peaceful interconnectivity, joint infrastructure and industrial development, as well as joint management of natural resources. For example, BRI may help with infrastructure and management advice resolving or preventing conflicts on transboundary water resources. There are some 263 transboundary lake and river basins, covering almost half the earth’s surface and involving some 150 countries. In addition, there are about 300 transboundary aquifers serving about 2 billion people who depend on groundwater.

The Chinese government calls the Silk Road Initiative “a bid to enhance regional connectivity and embrace a brighter future”. Today, John Lennon’s “Give Peace a Chance” is more relevant than ever. And China is a vanguard in promoting peaceful development across the globe. BRI, China’s foreign policy flagship, is clearly an initiative towards world Peace.