For several years, chocolate barons have devastated forests to make room to plant cocoa, a crop that naturally grows in shade. Now, a report from Mighty Earth—a nonprofit that works to conserve threatened landscapes—shows new evidence that illegal deforestation is occurring in protected areas; specifically, in the national parks of West Africa.

The Ivory Coast and Ghana produce a combined 2.6 million tons of chocolate—60 percent of the world’s supply. It’s no wonder so many of these nations’ protected lands are at risk. According to Mighty Earth’s report, 10 percent of Ghana’s tree cover has been replaced by cocoa monocultures. The Ivory Coast, once heavily forested and extremely biodiverse, has lost seven of its 23 protected areas to cocoa. Due to habitat loss, its chimpanzees are now endangered, and its elephants are nearly extinct. This means that companies like Mars, Nestlé, Hersey’s and Godiva are on the hot seat for making products using cocoa grown by uncertified sources.

“Chocolate companies have taken advantage of corrupt governance in Ghana and the Ivory Coast to deforest parklands,” saic Glenn Horowitz, CEO of Mighty Earth. With a rising demand for the world’s guiltiest pleasure, chocolate companies are also taking advantage of farmers—on average, these growers are paid less than 80 cents a day. “The main issue is that chocolate producers have neglected to establish a direct relationship with cocoa growers,” said Horowitz.

The new report documents cocoa beans’ journey through the supply chain: Middlemen, called pisteurs, buy the crop from settlers and transport them to neighboring villages, where they are sold to cooperatives (more middlemen), who sell them to agribusinesses, who then sell them to major chocolate producers.

Despite extensive sustainability initiatives proposed by chocolate corporations like Mars, deforestation rates remain high, and cocoa farmers’ wages low—and these companies continue to illegally source cocoa from protected areas. Horowitz hopes Mighty Earth’s report will function as a wake-up call, and preface a shift from promises to actions. “Chocolate producers have the power to demand deforestation-free cocoa, and that growers are paid well in the process. We’ve seen this change in other commodities, such as palm oil, for instance—in which case, consumer companies and traders set strong conservation and human rights standards that, when well-implemented, have made a big difference on the ground.”

It’s a far-from-impossible task. Several sustainable cocoa companies manage to not only produce cocoa without destroying rain forests, but also to give a fair share of proceeds directly to their growers—in many cases, local smallholder farmers. So, what’s stopping major producers from doing the same?

In response to Mighty Earth’s report, Amy Truelson, senior manager of external affairs for Mars, wrote, “Mars and the World Cocoa Foundation agree with many of the report’s recommendations, notably the importance of forest protection and restoration, sector transparency, joint action for monitoring and compliance, and protecting indigenous community rights. We fully support the World Cocoa Foundation’s position that there should be no conversion of any remaining forests in Côte d’Ivoire and Ghana for cocoa production.” Purportedly, Mars continues to strive toward its goal of sourcing 100 percent of its chocolate from certified sources by 2020 (the company is currently at 50 percent). 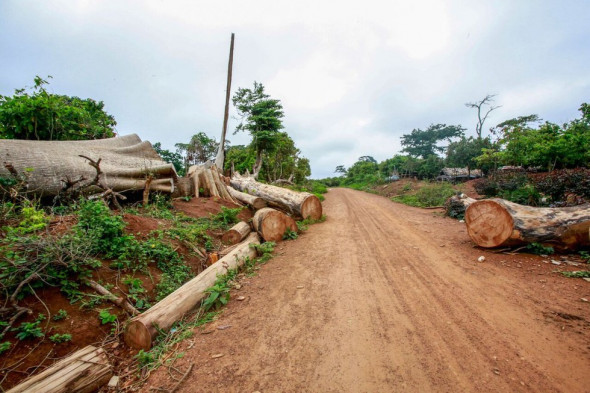 Nestle, Hershey’s and Godiva did not respond to requests for comment.

The pressure surrounding the issue is mounting. Case in point? The recent pledge that 12 of the largest cocoa and chocolate manufacturers in the world made to Prince Charles of Wales—a longtime proponent of a more sustainable chocolate industry in the name of climate change mitigation. Earlier this year, the Prince of Wales met with companies including Mars, Nestle and Ferrero in London to solidify their commitments to develop a plan to end deforestation in the cocoa industry, which they’ll present to the United Nations Framework Convention during next month’s Climate Summit.

Horowitz has high hopes for change in the chocolate industry. Still, he warned, “These companies have to understand that they can’t just pay lip service to conservation. They’re going to have to change the way they do business.”