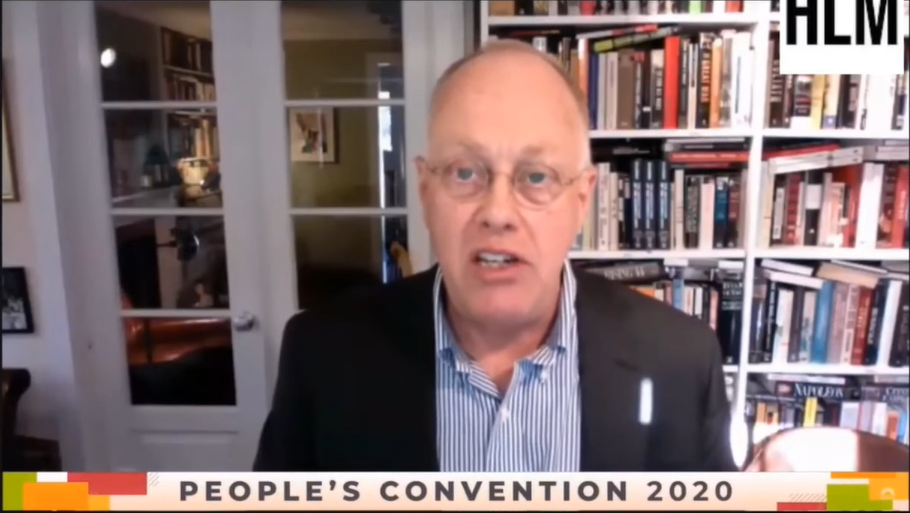 “I fight fascists because they are fascists.”

On Sunday, August 30, Chris Hedges spoke to the Movement for a People’s Party at their “People’s Convention.” Here is the video and transcript of his comments:

There is only one choice in this election. The consolidation of oligarchic power under Donald Trump or the consolidation of oligarchic power under Joe Biden. The oligarchs, with Trump or Biden, will win again. We will lose. The oligarchs made it abundantly clear, should Bernie Sanders have miraculously become the Democratic Party nominee, they would join forces with the Republicans to crush him. The oligarchs preach the mantra of the least-worst to us when they attempt to ram a Hillary Clinton or a Joe Biden down our throats but ignore it for themselves. They prefer Biden over Trump, but they can live with either.

Only one thing matters to the oligarchs. It is not democracy. It is not truth. It is not the consent of the governed. It is not income inequality. It is not the surveillance state. It is not endless war. It is not jobs. It is not the climate breakdown. It is the primacy of corporate power — which has extinguished our democracy and left most of the working class and working poor in misery — and the continued increase and consolidation of their wealth. It is impossible to work within the system to shatter the hegemony of oligarchic power or institute meaningful reform. Change, real change, will only come by sustained acts of civil disobedience and mass mobilization, as with the yellow vests movement in France and the British-based Extinction Rebellion. The longer we are fooled by the electoral burlesque, the more disempowered we will become.

Dr. Cornel West and I were on the streets with protesters in Philadelphia outside the appropriately named Wells Fargo Center during the 2016 Democratic Convention when hundreds of Sanders delegates walked out of the hall. “Show me what democracy looks like!” they chanted, holding Bernie signs above their heads as they poured out of the exits. “This is what democracy looks like!”

Sanders’ greatest tactical mistake was not joining them. He bowed in fear before the mighty altar of the corporate state. He had desperately tried to stave off a revolt by his supporters and delegates on the eve of the convention by sending out repeated messages in his name — most of them authored by members of the Clinton campaign — to be respectful, not disrupt the nominating process and support Clinton. Sanders was a dutiful sheepdog then and is a dutiful sheepdog now, attempting to herd his disgruntled supporters into the embrace of the Clinton and now Biden campaign.

Sanders apparently believed that if he was obsequious enough to the Democratic Party elite, they would give him a chance in 2020, a chance they denied him in 2016. Politics, I suspect he would argue, is about compromise and the practical. This is true. But playing politics in a system that is not democratic is about being complicit in the charade. Sanders misread the Democratic Party leadership, swamp creatures of the corporate state. He misread the Democratic Party, which is a corporate mirage. Its base can, at best, select preapproved candidates and act as props at rallies and in choreographed party conventions. The Democratic Party voters have zero influence on party politics or party policies. Sanders’ naivete, and perhaps his lack of political courage, drove away his most committed young supporters. They are right. He is wrong. We need to overthrow the system, not placate it.

Biden represents the nostalgia of the ruling elite for the old neoliberal order. He personifies the betrayal by the Democratic Party of working men and women that sparked the deep hatred of the ruling elites across the political spectrum. He is a gift to a demagogues and con artists like Trump.  A Biden presidency will ensure that far more competent demagogues will rise to take power. Biden cannot plausibly offer change. He can only offer more of the same. And most Americans do not want more of the same. The country’s largest voting-age bloc, the 100 million-plus citizens who out of apathy or disgust do not vote, will once again stay home. This demoralization of the electorate is by design.

In America you are only allowed to vote against what you hate.  But by voting for Biden you do vote for something.  You vote for the humiliation of courageous women such as Anita Hill who confronted their abusers. You vote for the architects of the endless wars in the Middle East. You vote for the apartheid state in Israel. You vote for wholesale surveillance of the public by government intelligence agencies and the abolition of due process and habeas corpus. You vote for austerity programs, including the destruction of welfare and cuts to Social Security. You vote for NAFTA, free trade deals, de-industrialization, a decline in wages, the loss of hundreds of thousands of manufacturing jobs and the offshoring of jobs to underpaid workers who toil in sweatshops in Mexico,China or Vietnam. You vote for the assault on public education and the transfer of federal funds to for-profit and Christian charter schools. You vote for the doubling of our prison population, the tripling and quadrupling of sentences and huge expansion of crimes meriting the death penalty. You vote for militarized police who gun down poor people of color with impunity.  You vote against the Green New Deal and immigration reform. You vote for limiting a woman’s right to abortion and reproductive rights. You vote for a segregated public-school system in which the wealthy receive educational opportunities and the poor are denied a chance. You vote for punitive levels of student debt and the inability to free yourself of debt obligations through bankruptcy. You vote for deregulating the banking industry and the abolition of Glass-Steagall. You vote for the for-profit insurance and pharmaceutical corporations and against universal health care. You vote for bloated defense budgets. You vote for the use of unlimited oligarchic and corporate money to buy our elections. You vote for a politician who during his time in the Senate abjectly served the interests of MBNA, the largest independent credit card company headquartered in Delaware, which also employed Biden’s son Hunter.

What the public wants and deserves will again be ignored for what the corporate lobbyists demand. If we do not respond to the social and economic catastrophe that has been visited on most of the population, exacerbated by our failure to control the pandemic, we will be unable to thwart the rise of corporate tyranny and a Christian fascism or halt the ecocide that will wipe out the human species, along with most life forms.

Right-wing violence, along with lethal police violence, will explode, with or without Trump in office, if we do not build robust socialist programs to reintegrate those who have been pushed aside back into the society, to heal the ruptured social bonds, to give workers jobs that provide a sustainable income and dignity, empowerment and protection, to provide free and well-funded schooling through college, if we do not rebuild our labor unions, along with instituting universal health care and end to the squandering of our resources on endless war.

Yes, we need new radical parties, which is why I am here today, in this election and from now on.  We need to stand up for our values, not surrender them, which is why I urge you to vote in this coming election for The Green Party.

I am not willing to surrender every issue I care about to become an accomplice in this moral squalor and death march to extinction.  I am also not naïve enough to tell you we can win.  The corporate state has built very effective mechanisms of control and oppression.  But these corporate forces have us by the throat, and they have my children by the throat.  In the end, I do not fight fascists because I will win.  I fight fascists because they are fascists.