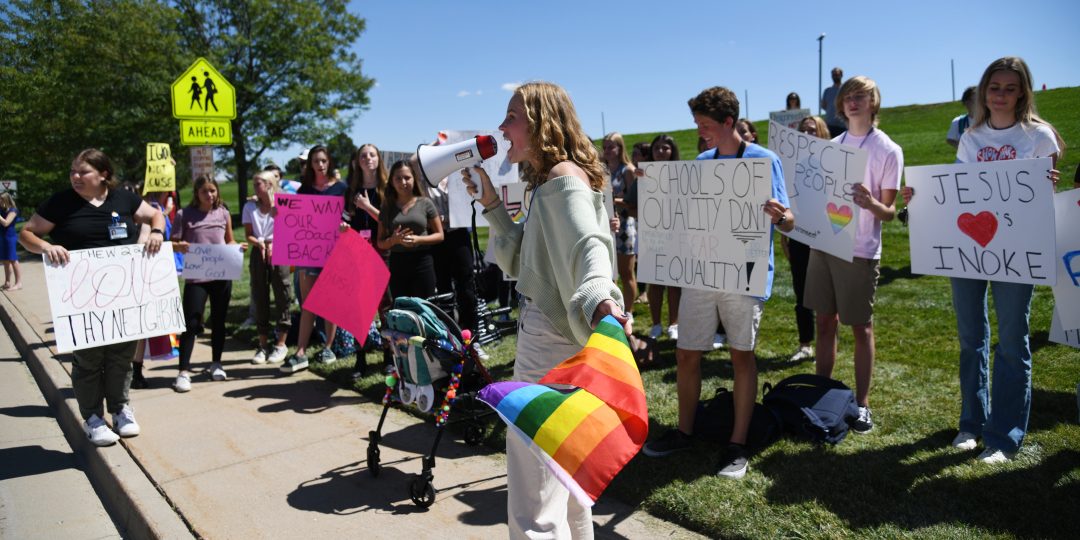 Above Photo: Ivie Hunt, 15, front, and about 50 Valor Christian High School students walked out of classes to support volleyball coach Inoke Tonga, who says he was forced to leave his job over his sexuality, in front of the school in Highlands Ranch on Tuesday, Aug. 24, 2021. (Hyoung Chang, The Denver Post)

Coach Says He Was Pressured To Leave Because He Is Gay

Waving pride flags and espousing messages of love, about 50 Valor Christian High School students walked out of classes Tuesday afternoon to support a volleyball coach who says he was forced to leave his job because he’s gay.

The volleyball coach, Inoke Tonga, described on social media how he was pushed out of his job at Valor Christian after school administration found a social media post suggesting Tonga was gay.

Students gathered across the street from the private, religious high school around 1:30 p.m. and shared their thoughts through a bullhorn, occasionally shouting over a fleet of leaf blowers the school brought out at the same time.

“Hiding behind Christianity as a guise for bigotry is not only disgusting, it’s not Christ-like,” Lucy Sarkissian, 16, who helped organize the walkout, said. “We will not stand for it. We will not forget your bigotry. We will no longer stay silent.”

Sarkissian said she’s witnessed discrimination and homophobia at Valor, including watching teachers refuse to use a trans student’s pronouns and proper name.

“My obligation as someone called to love others as the Lord does is to speak out against bigotry and stand up,” Sarkissian said.

Tonga, a devout Christian, said the campus pastor and athletic director called a meeting with him last week in which he was berated over his sexual orientation. Tonga said the school administrators called his gayness “a danger” to the school and children and commented that “parents pay too much” to attend the school for their children to be coached by a gay man.

Toward the end of the conversation, first reported by Denver7, Tonga said school officials told him he had two options: Denounce being a gay man or leave the position.

In Valor Christian’s statement provided by marketing coordinator Nancy Columbia, school officials said they require its staff, faculty and volunteer leaders to agree with Valor’s Christian beliefs set forth in their statement of belief and to live in accordance with it.

Valor Christian said that after its discussion with Inoke, the coach told them he does not support Valor’s beliefs and requested a separation from the school.

“Valor Christian High School embraces, loves and respects all students, families and other participants in our community, regardless of whether or not they agree with Valor’s beliefs,” the statement said. “Although Coach Inoke has misrepresented many aspects of this matter, Valor appreciates the contributions he has made to the student athletes in our volleyball program, and we wish him the very best in his future endeavors.”

Students appear to be gathering outside the school. Some have LGBTQ flags and signs of support.

Media are being kept off the private campus, so I can’t get close enough to hear their messages or read their signs at this point. Will keep you posted. pic.twitter.com/mRJKvnvHBt

Cole Watson, a 21-year-old alumnus who came to support the student walkout, said he’s gay and although he had a great experience academically and artistically, he was discriminated against for his sexual orientation.

“I’m disappointed and disgusted by this, but not surprised,” Watson said.

Valor Christian High School is a member of the Colorado High School Activities Associations. The association’s bylaws say that a member school’s students must have equal access and opportunities to participate in activities and athletics without unlawful discrimination based on disability, race, creed, color, gender, sexual orientation, religion, age, national origin, or ancestry.

When asked if those bylaws extended to coaches and whether Valor Christian could face any CHSAA repercussions regarding this incident, Brad Cochi, CHSAA’s media relations director, sent the following statement: “The state of Colorado, along with the Federal Government, have strong and robust legal protections for individuals that believe their civil rights have been violated by their employers. The correct venue for addressing any concerns around alleged discriminatory practices of school employers in Colorado rests with the Colorado Civil Rights Commission, along with the State and Federal courts.”

Iris Halpern, an employee rights attorney with Denver-based firm Rathod Mohamedbhai LLC, said there are federal and state exemptions to anti-discrimination laws that give religious organizations hiring and firing discretion based on an employee’s sexual orientation. There is legal precedence that has supported religious institutions in similar cases, Halpern said.