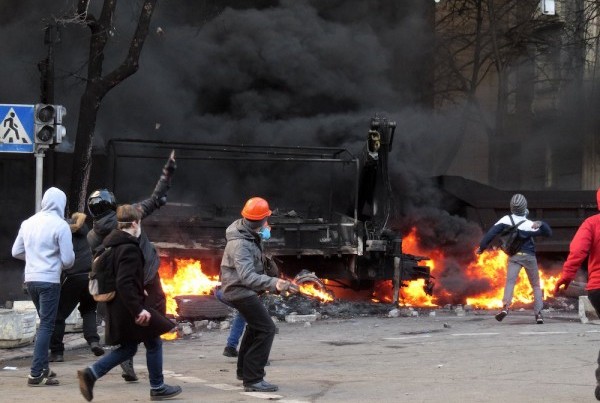 Chronology of the Ukrainian Coup

Note: A full chronology of US involvement would go back to the build-up to the 2004 Orange Revolution and the massive $5 billion funding the US has admitted to providing the Ukraine opposition since then.

Listening to the US media, even the most diligent news junkie would find it difficult to know that the U.S. State Department played not only a vital role in the violence and chaos underway in Ukraine but was also complicit in creating the coup that ousted democratically elected President Viktor Yanuyovch.  Given the Russian Parliament’s approval of Putin’s request for military troops to be moved into Crimea, Americans uninformed about the history of that region might also be persuaded that Russia is the aggressor and the sole perpetrator of the violence.

Let’s be clear about what is at stake here:  NATO missiles on the adjacent Ukraine border aimed directly at Russia would make that country extremely vulnerable to Western goals and destabilization efforts while threatening Russia’s only water access to its naval fleet in Crimean peninsula, the Balkans, the Mediterranean Sea and the Middle East – and not the least of which would allow world economic dominance by the US, the European Union, the IMF, World Bank and international financiers all of whom had already brought staggering suffering to millions around the globe.

The fact is that democracy was not a demand on the streets of Kiev.  The current record of events indicates that protests of civil dissatisfaction were organized by reactionary neo-Nazi forces intent on fomenting a major domestic crisis ousting Ukraine’s legitimate government.   As events continue to spiral out of control, here is the chronology of  how the coup was  engineered to install a government more favorable to EU and US goals.

April 11, 2011 – A Kiev Post article entitled “Ukraine Hopes to Get $1.5 Billion from IMF in June” states that the loan is dependent on pension cuts while   “maintaining cooperation with the IMF, since it influences the country’s interaction with other international financial institutions and private investors” and further that the “attraction of $850 million from the World Bank in 2011, depended on cooperation with the IMF.”   Well, that about says it all – if Ukraine played ball. then the loan money would pour in.

November 21, 2013 –  fast forward to the EU summit in Lithuania when President Yanuyovch  embarrassed the European Union by rejecting its Agreement in favor of joining Russia’s Common Union with other Commonwealth Independent States.

November 27, 2013 – it was not until February 23, 2014 when  Anonymous Ukraine hackers released a series of emails from a Lithuanian government advisor to opposition leader and former boxer Vitaly Klitschko regarding plans to destabilize Ukraine; for example:

“Our American friends promise to pay a visit in the coming days, we may even see Nuland or someone from the Congress.”  12/7/2013

“Your colleague has arrived ….his services may be required even after the country is destabilized.” 12/14/2013

“I think we’ve paved the way for more radical escalation of the situation.  Isn’t it time to proceed with more decisive action?” 1/9/2014

November 29, 2013 –  well-orchestrated protestors were already in the streets of Kiev as European Commission President Jose Manual Barroso announced that the EU would “not accept Russia’s veto” of the Agreement.

December 13, 2013 – As if intent on providing incontrovertible evidence of US involvement in Ukraine, Assistant US Secretary of State for Europe and Eurasia Victoria Nuland proudly told a  meeting of the International Business Conference sponsored by the US-Ukrainian Foundation that the US had ‘invested’ more than $5 billion and ‘five years worth of work and preparation” in achieving what she called Ukraine’s ‘European aspirations.” Having just returned from her third trip to Ukraine in five weeks, Nuland boasted of her ‘coordinated high level diplomacy’ and a more than two hour ‘tough conversation’ with Yanukovych.  Already familiar with Nuland as former Secretary Clinton’s spokesperson at State, one can imagine her discourteous tone and manner when she says she made it “absolutely clear” to Yanukovych that the US required “immediate steps” …to “get back into conversation with Europe and the IMF.”   While Western media have portrayed Yanukovych as a ‘weak’ leader, Nuland’s description of a ‘tough’ meeting can only mean that he resisted her threats and intimidations.  In what must have been a touching moment, Nuland spoke about a show of force by government police on demonstrators who “sang hymns and prayed for peace.”

What Nuland did not reveal on December 13 was that her meetings with ‘key Ukrainian stakeholders’ included neo-Nazi Svoboda party leader Oleh Tyahnybok and  prime minister wannabe Arsenly Yatsenyuk of the Fatherland Party. At about the same time Nuland was wooing fascist extremists, Sen. John McCain (R-Az) and Sen. Chris Murphy (D- Conn) shared the stage in Kiev with Tyahnybok offering their support and opposition to the sitting government. The Svoboda party which has roots with extreme vigilante and anti-semitic groups has since received at least three high level cabinet posts in the interim government including deputy prime minister. There is no doubt that the progenies of west Ukraine’s historic neo-fascist thugs that fought with Hitler are now aligned with the US as represented by Victoria Nuland.

January 24, 2014 – President Yanukoyvch identified foreign elements participating in Kiev protests warning that armed radicals were a danger to peaceful citizens.  Independent news agencies also reported that “not all of Kiev’s population backs opposition rule, which depends mainly on a group from the former Polish town of Lvov, which holds sway over Kiev downtown – but not the rest of the city.”

January 30, 2014 –   The State Department’s website Media Note announced Nuland’s upcoming travel plans that ”In Kyiv, Assistant Secretary Nuland will meet with government officials, opposition leaders, civil society and business leaders to encourage agreement on a new government and plan of action.”  In other words, almost a month before President Yanukovych was ousted, the US was planning to rid the world of another independently elected President.

February 4, 2014 –  More evidence of Ms. Nuland’s meddling with extremist factions and the high level stakes of war and peace occurred in her taped conversation with U.S. Ambassador to Ukraine Geoffrey Pyatt discussing their calculations of who’s in and who’s out to replace Yanukovych.   Note mention of Nazi leader Oleh Tyahnybok.   Here are some selected excerpts:

Pyatt:   “I think we’re in play… the [Vitali] Klitsch piece is obviously the complicated electron here especially the announcement of him as deputy prime minister. Your argument to him which you’ll need to make,  I think the next phone call  we want to set up is exactly the one you made to Yats [Yatsenyuk].  And I’m glad you sort of put him on the spot on where he fits in this scenario and I’m very glad he said what he said in response.”

Pyatt:    “yeah…I mean I guess.  You think…what…in terms of him not going into the government,  just let him sort of stay out and do his political homework and stuff.   I’m just thinking in terms of  the process moving ahead, we want to keep the moderate democrats together.  The problem is going to be Tyahnybok and his guys.  I’m sure that’s what Yanukoyvch  is calculating on all this.”

Nuland:   “I think Yats is the guy who’s got the economic experience, the governing experience.  What he needs is Klitsch and Tyahnybok on the outside and he needs to be talking to them four times a week you know…I think with Klitsch going in at that level working for Yats, it’s not going to work.”

Nuland:   “My understanding is that the big three [Yatsenyuk, Klitsch and Tyahnybok] were going in to their own meeting and that Yats was going to offer in that context a three plus one conversation with you.”

Pyatt:  “ That’s what he proposed but knowing the dynamic that’s been with them where  Klitsch has been top dog;  he’s going to take a while to show up at a meeting, he’s probably talking to his guys at this point so I think you reaching out to him will help with the personality management among the three and gives us a chance to move fast on all this stuff and put us behind it before they all sit down and he explains why he doesn’t like it.”

Nuland:  … “when I talked to Jeff Feltman this morning, he had a new name for the UN  guy …Robert Serry  – he’s now gotten both Serry and Ban ki Moonto agree that Serry could come in Monday or Tuesday… so that would be great I think  to help glue this thing and have the UN help glue it and you know fuck the EU.”

Pyatt:   “Exactly.   I think we’ve got to do something to make it stick together because you can be pretty sure the Russians will be working behind the scenes.    ….Let me work on Klitchko and I think we want to get somebody with an international personality to come out here and help midwife this thing.”

Nuland:  ”…Sullivan’s come back to me saying you need Biden and I said probably tomorrow for an ‘atta boy’ and get the deeds to stick  so Biden’s willing.”

February 20, 2014 –   Foreign ministers from Poland, Germany and France visiting Kiev secured President Yanukovych’s  agreement that would commit the government to an interim administration, constitutional reform and new parliamentary and presidential elections.  With “no clear sign that EU or US pressure has achieved” the desired effect,opposition leaders rejected Yanukovych’s compromise which would have ended the three month stand-off.  Russian Foreign Minister Sergey Lavrov called on the German, French and Polish foreign ministers to step in and take responsibility for upholding the deal they helped forge and not let “armed extremists” directly threaten Ukrainian sovereignty.

February 21, 2014  –  At a special summit in Brussels, European foreign ministers agreed to adopt sanctions on Ukraine including visa bans and asset freezes. The EU decision followed “immense pressure from the US for the European powers to take punitive action against the Ukrainian regime.”  Washington had already imposed travel bans on 20 leading Ukrainians.

February 22, 2014 –  An hour after refusing to resign, the Ukrainian Parliament voted, according to Russian president Vladimir Putin, in an unconstitutional action to oust President Yanukovych and that pro-EU forces staged a ‘coup’.  Yanukovych departed Kiev in fear for his life.

March 1, 2014 – During a  conversation initiated by the vice president, Biden delivered his ‘atta boy’ with a phone call to newly installed prime minister Arseniy Yatsenyuk  reaffirming US support for Ukraine’s ‘territorial integrity.”

All of the above machinations expose an incoherent and corrupt American foreign policy with a litany of US hypocrisy that might be hilarious if not for potentially grave global implications. The comment “you just don’t behave by invading another country on completely trumped up pretext” might just win Secretary of State John Kerry the Hypocrisy of the Year Award.   Kerry, of course, famously supported the 2003 invasion of Iraq seeking weapons of mass destruction.

But then again, the President’s own comments that “..countries have deep concerns and suspicions about this kind of meddling..” and that “…as long as none of us are inside Ukraine trying to meddle and intervene.. with decisions that properly belong to Ukrainian people…” while  announcing  $1 billion aid  package to Ukraine (but not Detroit) would be a close runner-up for the Award.