Church Plans to ‘Compete’ Wonga Out of Business

The Archbishop of Canterbury has warned the online lender Wonga that the Church of England plans to force it out of business – by competing against it.

The Most Rev Justin Welby told Wonga boss Errol Damelin the Church planned to do this by expanding credit unions as an alternative to payday lenders.

The plan is to create “credit unions that are… engaged in their communities”, he said.

Mr Damelin said he was “all for better consumer choice”.

Payday firms offer short-term loans, often at high interest rates, and have been accused of leading people into more debt.

Archbishop Welby, a former financier who sits on the Parliamentary Commission on Banking Standards, has previously lobbied for a cap on high interest rates charged by loan companies.

He said the Church could do more to help non-profit lenders to compete with payday firms.

“I’ve met the head of Wonga, and we had a very good conversation,” the archbishop told Total Politics magazine.

He said of Mr Damelin’s response: “He’s a businessman; he took that well.”

Mr Damelin later said: “There is mutual respect, some differing opinions and a meeting of minds on many big issues.

“On the competition point, we always welcome fresh approaches that give people a fuller set of alternatives to solve their financial challenges. I’m all for better consumer choice.”

BBC religious affairs correspondent Robert Pigott said the archbishop’s plan was to go to some of the 500 independent loan companies and say to them, “We will help you by letting you have access to our buildings and expertise”. 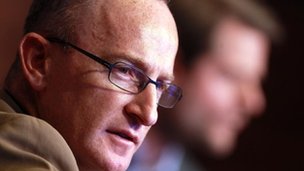 Errol Damelin launched Wonga in 2007 and it has become a multi-national company
Our correspondent said the Church would not run the companies but would help them and allow them to work on its premises.

“I think the archbishop would see this as a social good countering a social evil,” he said.

He also said it was quite possible that in future people could go to church when they needed to borrow money.

“Churches are already being used as libraries and shops and post offices. It’s part of a wider trend for churches to try and become more relevant to people’s everyday lives.”

Charities such as Christians Against Poverty already use church premises to offer debt counselling to those in difficulty.

The Association of British Credit Unions said it was a good idea to harness the skills among church congregations to help credit unions grow.

“We believe it is speed and convenience which attracts people to payday lenders, not the short term nature of the loans. The amount of loans which are rolled over demonstrates how the short-term nature of the product is in itself not in the best interests of consumers – even before the high interest charges are added on,” it said.

“Credit unions have been shown to be best value in the UK market up to about £2,000, and many will match bank rates for higher value loans as well. They lend responsibly and ensure repayment terms are affordable for the borrower.”

However, the association accepted that credit unions could do more to compete with payday lenders, by improving online applications and speedy decisions on loans.

In April, the government announced an investment of £36m in credit unions, to help them offer an alternative to payday lenders.

Wonga has said it charges about 1% a day on its consumer loans, which are short-term, and for small amounts.

The lender said there was room for more competition in the market.

“The Archbishop is an exceptional individual, with our discussions ranging from the future of banking and financial services to the emerging digital society,” Mr Damelin said.

“On his ideas for competing with us, Wonga welcomes competition from any quarter that gives the consumer greater choice in effectively managing their financial affairs.”

This view was echoed by the Consumer Finance Association (CFA), which represents many other payday lenders.

“Everyone needs access to banking and credit facilities in the modern world and so we welcome any support for the credit unions, which we see as complementary to short-term lenders,” said Russell Hamblin-Boone, chief executive of the CFA.

“High standards and responsible lending are our watch words and I have written to the Archbishop seeking a meeting to talk about the role of alternative finance.”

An investigation into the payday loan industry by its regulator found widespread irresponsible lending earlier this year.

The industry, worth £2bn, was later referred to the Competition Commission by the Office of Fair Trading.

At an industry summit in Whitehall last month lenders were told they could face tighter controls, including limits on the number of loans that can be taken out and a cap on the total cost of credit.

The measures will be considered by the Financial Conduct Authority, which formally takes over regulation of the industry from next April.

Asked about Archbishop Welby’s comments, Chancellor George Osborne said: “We are now regulating [the payday] sector. I am all in favour of credit unions and all sorts of other channels to allow families to get credit. I want to see as many options for families as possible.”

He pulled out of the club’s pre-season trip to Portugal, saying he was not prepared to promote the payday loan company, citing his religion, and instead offered to wear an unbranded strip.