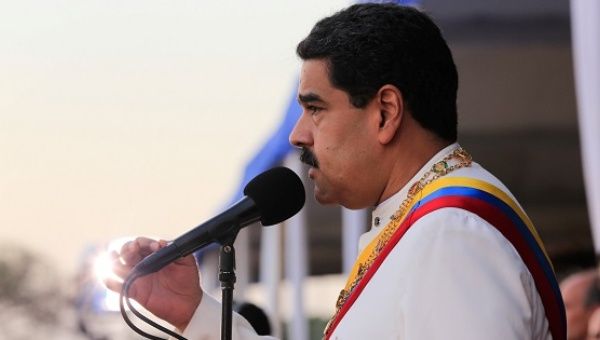 Above Photo: Venezuela’s President Nicolas Maduro speaks during a ceremony to mark the birthday of the South American independence leader Simon Bolivar. | Photo: Reuters Note: There has been an ongoing regime change operation in Venezuela since they elected Hugo Chavez in 1999.  It was most evident in 2002 when Chavez was briefly removed from office until a counter-coup by the people returned him to power. The US has allied with oligarchs and conducted violent protests, hoarded food and basic supplies and undermined the money supply. Now the CIA admits it is working with the government’s of Colombia and Mexico to change the Venezuelan government. The US is also threatening countries that ally with Venezuela with sanctions, Telesur reports on the threats made against Nicaragua. KZ

In an interview with Vanessa Neumann, president of business intelligence firm Asymmetrica, Pompeo said, “We are very hopeful that there can be a transition in Venezuela and we the CIA is doing its best to understand the dynamic there.” “America has a deep interest in making sure that (Venezuela) is stable, as democratic as possible … The Colombians, I was just down in Mexico City and in Bogota a week before last talking about this very issue trying to help them understand the things they might do so that they can get a better outcome for their part of the world and our part of the world,” he added.

The Mexican government has denied the allegations. In a press statement, the Ministry of Foreign Affairs said, “Mexico is a country that respects international law and does not work with any other country to the detriment of another.”

The Venezuelan government has come under increased national pressure ahead of elections for the National Constituent Assembly on July 30. President Trump has threatened economic sanctions against Venezuela if it goes ahead with the elections, a call which has been supported by Luis Almagro, the head of the Organization of American States. President Maduro however, has insisted that the National Constituent Assembly is the only solution to the political crisis in Venezuela.