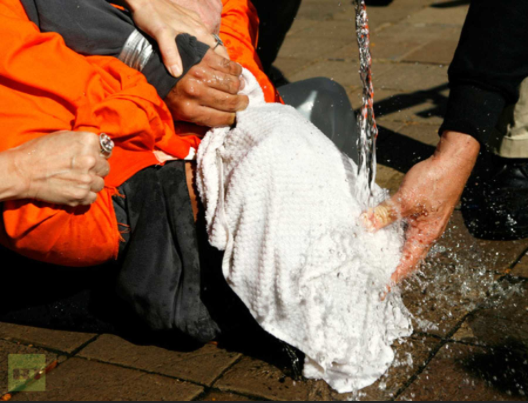 Note: We found it interesting that the Washington Post was the first to write about a leak of this senate report on the CIA. The Washington Post has strong ties to the CIA, ties that got stronger with the new owner, Jeff Bezos whose primary business, Amazon recently received a $600 million contract from the CIA to build a “private cloud” for the CIA to use for its data needs. Was this leaked to the Post so the CIA story could get its best possible initial spin? (If so, it is still a devastating story about the CIA’s lying about its torture program.) Did the Post get the leak to undermine claims that it has been corrupted by this contract — a contract double the amount Bezos paid to purchase the Post? Now if you search “Washington Post CIA” rather than stories about Bezos conflict of interest you get links to their torture report story and the Amazon contract is buried. Or, is this just good reporting?  We don’t know the answer.  No doubt as the report is made public more will become available and we will be better able to judge the quality of Post’s story. KZ

A report by the Senate Intelligence Committee concludes that the CIA misled the government and the public about aspects of its brutal interrogation program for years — concealing details about the severity of its methods, overstating the significance of plots and prisoners, and taking credit for critical pieces of intelligence that detainees had in fact surrendered before they were subjected to harsh techniques.

The report, built around detailed chronologies of dozens of CIA detainees, documents a long-standing pattern of unsubstantiated claims as agency officials sought permission to use — and later tried to defend — excruciating interrogation methods that yielded little, if any, significant intelligence, according to U.S. officials who have reviewed the document.

“The CIA described [its program] repeatedly both to the Department of Justice and eventually to Congress as getting unique, otherwise unobtainable intelligence that helped disrupt terrorist plots and save thousands of lives,” said one U.S. official briefed on the report. “Was that actually true? The answer is no.”

Current and former U.S. officials who described the report spoke on the condition of anonymity because of the sensitivity of the issue and because the document remains classified. The 6,300-page report includes what officials described as damning new disclosures about a sprawling network of secret detention facilities, or “black sites,” that was dismantled by President Obama in 2009.

Classified files reviewed by committee investigators reveal internal divisions over the interrogation program, officials said, including one case in which CIA employees left the agency’s secret prison in Thailand after becoming disturbed by the brutal measures being employed there. The report also cites cases in which officials at CIA headquarters demanded the continued use of harsh interrogation techniques even after analysts were convinced that prisoners had no more information to give.

The report describes previously undisclosed cases of abuse, including the alleged repeated dunking of a terrorism suspect in tanks of ice water at a detention site in Afghanistan — a method that bore similarities to waterboarding but never appeared on any Justice Department-approved list of techniques.

U.S. officials said the committee refrained from assigning motives to CIA officials whose actions or statements were scrutinized. The report also does not recommend new administrative punishment or further criminal inquiry into a program that the Justice Department has investigated repeatedly. Still, the document is almost certain to reignite an unresolved public debate over a period that many regard as the most controversial in CIA history.

A spokesman for the CIA said the agency had not yet seen a final version of the report and was, therefore, unable to comment.

Current and former agency officials, however, have privately described the study as marred by factual errors and misguided conclusions. Last month, in an indication of the level of tension between the CIA and the committee, each side accused the other of possible criminal violations in accessing each other’s computer systems during the course of the probe.

The Senate Intelligence Committee is expected to vote Thursday to send an executive summary of the report to Obama for declassification. U.S. officials said it could be months before that section, which contains roughly 20 conclusions and spans about 400 pages, is released to the public.

The report’s release also could resurrect a long-standing feud between the CIA and the FBI, where many officials were dismayed by the agency’s use of methods that Obama and others later labeled torture.

CIA veterans have expressed concern that the report reflects FBI biases. One of its principal authors is a former FBI analyst, and the panel relied in part on bureau documents as well as notes from former FBI agent Ali Soufan. Soufan was the first to interrogate Zayn al-Abidin Muhammed Hussein, the suspected al-Qaeda operative better known as Abu Zubaida, after his capture in Pakistan in 2002 and has condemned the CIA for water­boarding a prisoner he considered cooperative.

The Senate report is by far the most comprehensive account to date of a highly classified program that was established within months of the Sept. 11, 2001, attacks, a time of widespread concern that an additional wave of terrorist plots had already been set in motion.

Several officials who have read the document said some of its most troubling sections deal not with detainee abuse but with discrepancies between the statements of senior CIA officials in Washington and the details revealed in the written communications of lower-level employees directly involved.

Officials said millions of records make clear that the CIA’s ability to obtain the most valuable intelligence against al-Qaeda — including tips that led to the killing of Osama bin Laden in 2011 — had little, if anything, to do with “enhanced interrogation techniques.”

The report is divided into three volumes — one that traces the chronology of interrogation operations, another that assesses intelligence officials’ claims and a third that contains case studies on virtually every prisoner held in CIA custody since the program began in 2001. Officials said the report was stripped of certain details, including the locations of CIA prisons and the names of agency employees who did not hold ­supervisor-level positions.

One official said that almost all of the critical threat-related information from Abu Zubaida was obtained during the period when he was questioned by Soufan at a hospital in Pakistan, well before he was interrogated by the CIA and waterboarded 83 times.

Information obtained by Soufan, however, was passed up through the ranks of the U.S. intelligence community, the Justice Department and Congress as though it were part of what CIA interrogators had obtained, according to the committee report.

“The CIA conflated what was gotten when, which led them to misrepresent the effectiveness of the program,” said a second U.S. official who has reviewed the report. The official described the persistence of such misstatements as among “the most damaging” of the committee’s conclusions.

Detainees’ credentials also were exaggerated, officials said. Agency officials described Abu Zubaida as a senior al-Qaeda operative — and, therefore, someone who warranted coercive techniques — although experts later determined that he was essentially a facilitator who helped guide recruits to al-Qaeda training camps.

The CIA also oversold the role of Abd al-Rahim al-Nashiri in the 2000 bombing of the USS Cole in Yemen, which killed 17 U.S. sailors. CIA officials claimed he was the “mastermind.”

The committee described a similar sequence in the interrogation of Hassan Ghul, an al-Qaeda operative who provided a critical lead in the search for bin Laden: the fact that the al-Qaeda leader’s most trusted courier used the moniker “al-Kuwaiti.”

But Ghul disclosed that detail while being interrogated by Kurdish authorities in northern Iraq who posed questions scripted by CIA analysts. The information from that period was subsequently conflated with lesser intelligence gathered from Ghul at a secret CIA prison in Romania, officials said. Ghul was later turned over to authorities in Pakistan, where he was subsequently released. He was killed by a CIA drone strike in 2012.

The CIA detainee who provided the most significant information about the courier provided the information prior to being subjected to coercive interrogation techniques,” Feinstein said in a 2013 statement, responding in part to scenes in the movie “Zero Dark Thirty” that depict a detainee’s slip under duress as a breakthrough moment.

If declassified, the report could reveal new information on the treatment of a high-value detainee named Ali Abdul Aziz Ali, the nephew of Khalid Sheik Mohammed, the self-proclaimed mastermind of the Sept. 11 attacks. Pakistan captured Ali, known more commonly as Ammar al-Baluchi, on April, 30, 2003, in Karachi and turned him over to the CIA about a week later. He was taken to a CIA black site called “Salt Pit” near Kabul.

At the secret prison, Baluchi endured a regime that included being dunked in a tub filled with ice water. CIA interrogators forcibly kept his head under the water while he struggled to breathe and beat him repeatedly, hitting him with a truncheon-like object and smashing his head against a wall, officials said.

As with Abu Zubaida and even Nashiri, officials said, CIA interrogators continued the harsh treatment even after it appeared that Baluchi was cooperating. On Sept. 22, 2003, he was flown from Kabul to a CIA black site in Romania. In 2006, he was taken to the U.S. military prison at Guantanamo Bay, Cuba. His attorneys contend that he suffered head trauma while in CIA custody.

Last year, the Senate Intelligence Committee asked Baluchi’s attorneys for information about his medical condition, but military prosecutors opposed the request. A U.S. official said the request was not based solely on the committee’s investigation of the CIA program.

Two other terrorism suspects, from Libya — Mohammed al-Shoroeiya and Khalid al-Sharif— endured similar treatment at Salt Pit, according to Human Rights Watch. One of the men said CIA interrogators “would pour buckets of very cold water over his nose and mouth to the point that he felt he would suffocate. Icy cold water was also poured over his body. He said it happened over and over again,” the report says. CIA doctors monitored the prisoners’ body temperatures so they wouldn’t suffer hypothermia.

The CIA denies waterboarding them and says it used the technique on only three prisoners.

The two men were held at Salt Pit at the same time as Baluchi, according to former U.S. intelligence officials.

Officials said a former CIA interrogator named Charlie Wise was forced to retire in 2003 after being suspected of abusing Abu Zubaida using a broomstick as a ballast while he was forced to kneel in a stress position. Wise was also implicated in the abuse at Salt Pit. He died of a heart attack shortly after retiring from the CIA, former U.S. intelligence officials said.