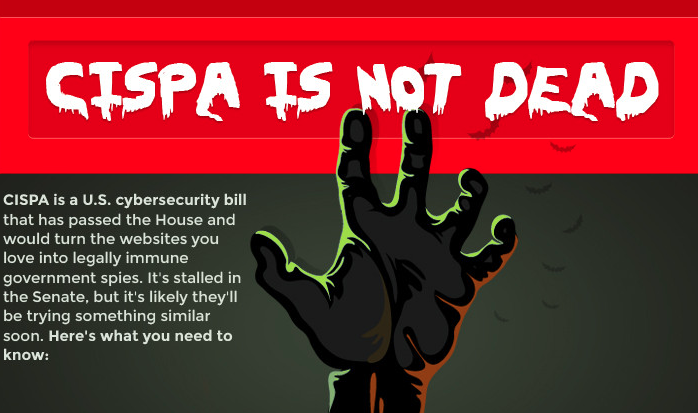 CISPA Is Back With A New Name: “CISA”

CISA is an even more toxic bill than the original CISPA bill. CISA stays in line with the original objective of the CISPA bill to strengthen and legitimize the NSA’s surveillance programs. But this time the bill would allow for and encourage sweeping datamining taps on Internet users for the undefined purpose of domestic “cybersecurity”. The NSA would be able to share this data with police and other law enforcement agencies for domestic “cybersecurity” purposes – meaning these powers will be used against innocent citizens.

Would you like to read more about CISPA’s newest form, CISA? Read some of these articles

Below is more information on the old version of CISPA.Come back to CISPAisback.org for more updates above on CISA and its scary NSA “upgrades” since the first CISPA.

Big Tech and the NSA both want to pass CISPA. And that should scare you.

Recent news reports reveal that the NSA has been pressuring their most powerful defenders in Congress to reintroduce CISPA — the Cyber Intelligence Sharing & Protection Act. This bill would allow corporations to share our private data with the government more easily, and with complete legal immunity. No wonder NSA chief Keith Alexander has been begging Congress to pass a CISPA bill, and the trade groups led by Google and other tech giants are on board.

At a time when opinion polls and growing dissent show that the public is overwhelmingly opposed to broader government surveillance, anti-privacy members of Congress seem determined to give the NSA and big tech companies what they want, even if it means trampling our rights in the process.

We need to stop CISPA for good this time. We stalled it in the Senate earlier this year, but now Senators Dianne Feinstein and Saxby Chambliss are planning to introduce the Senate version of the bill any day now. Just like last time, they’ll claim that the privacy concerns have been addressed, even though they’ve refused to make changes suggested by civil liberties groups. Let’s make this the last time they try anything like CISPA. Sign and share the petition now.

What’s wrong with CISPA? (in as few words as possible)

As it’s written in the version that passed the House, CISPA won’t protect us from cyber threats, but it will violate our 4th Amendment right to privacy.

A phone call is worth 100 petition signatures…

CISPA is an urgent threat. We’ve heard that Congress will be attempting to push it to a floor vote as soon as they return from recess. Last year, CISPA rushed through the house before anyone had time to react. We can’t let that happen again. The risks are too great.

Can you pick up the phone right now and call your Congressperson? We need to make sure that every member of Congress hears from their constituency that CISPA is not an option, and voting for it would be a big mistake.

We made this handy tool that lets you find your Congresspersons’ phone numbers with just one click. Hit the button below and try it out!