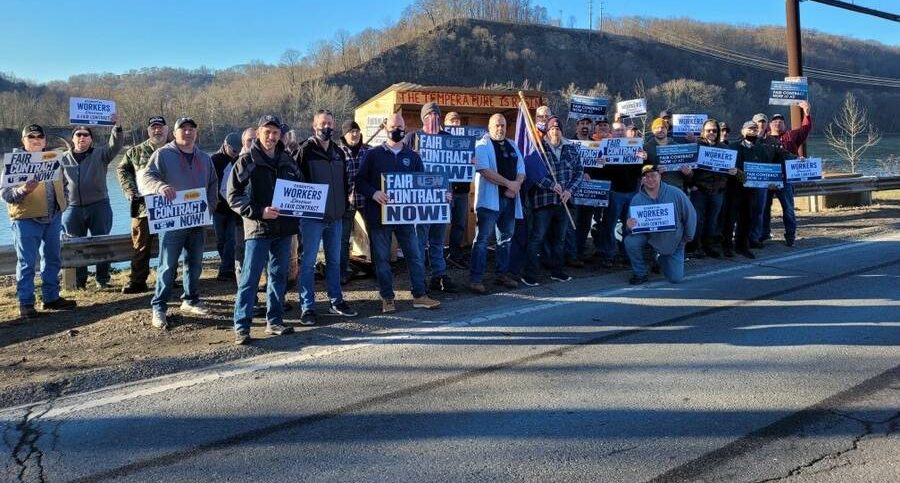 Brackenridge, PA – At 7:00 AM on Tuesday, March 30, 1,300 Steelworkers employed by Allegheny Technologies Incorporated (ATI) walked out in protest at facilities in Pennsylvania, Ohio, New York, Massachusetts, and Connecticut. The strike comes just over a year after United Steelworkers began negotiations with ATI. According to a statement released that day, the union is dissatisfied with company demands for ​“major economic and contract language concessions.”

United Steelworkers further claims that ATI has committed unfair labor practices. A charge filed with the National Labor Relations Board on March 9 alleges that the company is refusing to furnish the union with essential bargaining information. As USW International Vice President David McCall tells it, this withholding finally pushed the workers to strike.

“We are willing to meet with management all day, every day. But ATI needs to engage with us to resolve the outstanding issues,” McCall says. ​“We will continue to bargain in good faith, and we strongly urge ATI to start doing the same.

Healthcare is among the biggest points of contention in the negotiations. While the company maintains that their proposals continue a ​“premium-free plan,” a union bargaining update contends that out-of-pocket costs are up. Workers are also balking at a company plan to assign coverage to workers hired after 2024, which they say will give new employees inferior, more expensive coverage and thus introduce a ​“two-tiered system.”

Plant closures have been another topic of heated debate. Andy Artman, President of USW 1138 – 6 and an electrician at ATI’s Latrobe facility, says he had to relocate after ATI’s Bagdad plant in Gilpin, PA, shuttered in 2016. And he has company. Michael Barchesky, who has worked in electrical maintenance at the Latrobe facility since 2007, claims he knows people who have had to move two or three times because of facility closures. With the company pushing for more — including the Waterbury facility in Connecticut, the Louisville facility in Ohio, and a production line in Brackenridge — the union is fighting to ensure that workers forced into retirement will keep the pensions they’ve earned.

For rank-and-file workers like Joe Clark, an overhead crane operator at the Brackenridge facility, a work stoppage is his chance to draw a line in the sand after years of compromise.

“When we were first contracted to put this [hot rolling mill] in [at Brackenridge], they asked us for concessions because they wanted to create jobs that were going to be for us and for our families in the future,” says Clark. ​“It was supposed to guarantee more jobs for the community, so we sacrificed.”

The company spent $1.5 billion to expand and update the Brackenridge facility, aided by a controversial economic development strategy known as ​“Keystone Opportunity Zones.” The long-term tax abatements awarded to these zones were supposed to create jobs, but a 2015 piece written by then-President of the USW, Leo Gerard, argues they have never materially benefitted local residents. Bill Hrivnak, who Gerard quotes in the piece, says that “[Everyone] thought when they built a $1 billion plant here that it would be great for the community, and it hasn’t been.”

“They cut two thirds of the same department we work in now,” he continues. ​“The [new] jobs never appeared, the technology cut [existing] jobs, and we continued to work without raises, sacrificing. They’re always telling us the company is in a difficult position, and they’re not making money. But they’re paying out millions of dollars to their CEOs and their upper-level people.”

Although it expects to rebound in 2021, recent filings with the Securities and Exchange Commission reveal ATI has lost money each of the last three quarters. The same report finds that the company has ​“reduced company-wide employment levels by approximately 1,400 people, or about 17% of our total workforce.”

Many of those layoffs have been union jobs. Before a 2015 labor dispute that led to a lockout, workers say there were approximately 2,200 bargaining unit employees. Now there are just 1300, with management proposing to close more plants and make further cuts.

Artman puts things bluntly: ​“They’re trying to break the union.” Clark agrees, describing management as a ​“tyranny of evil men.” For its part, ATI released a statement on social media saying that it was ​“disappointed USW elected to strike.”

Fortunately for the USW, the Brackenridge community is on its side.

“Everyone’s still supportive,” says Barchesky. ​“They still wave, they still come and talk to us. Nobody wants to go on strike. We didn’t get compensated for the last seven months we were locked out, but we can’t lay down and take another beating… we can’t let them just keep gutting us.”

C. M. Lewis is an editor of Strikewave and a union activist in Pennsylvania. Follow him on Twitter: @thehousered