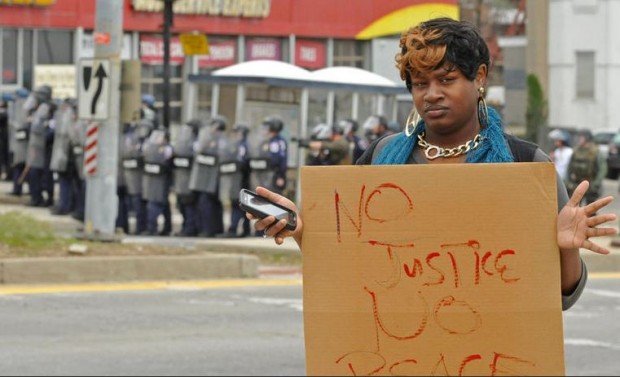 Above Photo: No justice, no peace. Source The Baltimore Sun

Far from the corrosive political circus unfolding in Washington, DC, local citizen groups are improving  conditions for the people in their own backyards. Although they receive almost no national media attention, these stalwart citizens work tirelessly to make their country a safer, cleaner and more just place to live.  One shining example of such a citizen is Tom “Smitty” Smith of Texas, who has advanced this noble work for the last 31 years.

As director of Public Citizen’s Texas office (see citizen.org), Smitty has an uncanny civic personality that has helped win victory after victory for the people of the Lone Star State.

Here is his basic, motivating philosophy: “The only way to beat political corruption and opposition is with organized people. Time after time I have seen a small group of citizens organize and speak out, and change happens. Our job as citizens is to take back our government and keep our government open, honest and responsive.”

Smitty is too modest to add that this is what he’s done for the past three decades working out of Austin, Texas. He is a symbol of integrity and hard work, walking the corridors of the state capitol with his signature big white cowboy hat.

Smitty practices what he preaches! He has co-founded and mentored 13 nonprofit organizations including Solar Austin, Clean Water Action in Texas, Texas ROSE (Ratepayers Organized to Save Energy) and the Sustainable Energy & Economic Development (SEED) coalition.

He keeps democracy in motion with what Texas State Representative Rafael Anchia calls the “wisdom of Yoda and the dogged determination of the Lorax…together with boundless knowledge, grace, good humor and patience.” Mr. Anchia might have added that Smitty has substantial legislative expertise and detailed knowledge of each legislator’s interests, strengths and weaknesses.

He has testified about 1,000 times before the Texas legislature on reforms that have improved public health, safety, consumer well-being, and have helped make Texas the top wind energy producer in the country, with a large solar energy building boom underway.

Again and again, he and his wife Karen Hadden have championed strategies to curb existing and forthcoming sources of toxic pollution. As just one example, Smitty worked to start the Texas Emissions Reduction Program (TERP), whose awards have replaced 10,000-plus diesel engines and have cut some $160,836 tons of smog-forming NOx from the Texas air.

With Karen of the SEED coalition and local groups, 12 of 17 proposed coal plants and four proposed nuclear plants have been stopped. To replace this generating capacity, Smitty and SEED worked to pass the state’s building energy code and more energy is being saved than coal plants would have produced.

Spot a consumer rip-off pattern and see Smitty swing into action. Over his career he has backed much-needed insurance reforms, improved the state lemon law (for defective motor vehicles) and pushed through major ethics reforms that also created the state’s ethics commission.

Smitty has trained over 300 interns to become activists. That project alone has led to the passage of numerous of laws, including a patients’ bill of rights and the smoke-free University of Texas campuses. A state office of administrative hearings also owes its existence to Smitty and his protégés.

“Our goal,” says Smitty, “has been to give the next generation the tools they need to keep perfecting democracy – and to stand up for the little guys.” Such words reveal the depth of his focus on building democratic institutions to forge and utilize the tools of democracy.

Long ago Smitty discovered that “showing up” is the predicate for the pursuit of a more just society. Upon this foundation, he has utilized his wealth of knowledge, data and articulate passion to both inform and hold accountable those who make the public decisions in the state Capitol.

Smitty knows the difference between charity and justice, between discriminatory injustice against certain groups and indiscriminate justice favoring all the people. Opposition is diminished when the latter policies are advanced like clean air, clean water, more job-producing efficient energy investments and open government.

But, you may say, look at Texas, its poverty, its pollution, its oil and gas barons controlling so many politicians, its crumbling infrastructure. Sure. But think how these conditions could be diminished with  1,000 Smitties doing the daily work of democratic citizenship and creative watchdogging.

Full-time citizens like Smitty exemplify the kind of dedication to civic life to which we should all aspire to some degree. Want to guess how many more serious bird watchers there are in that sprawling region than activists? Let’s face it. If It’s time that we join in their efforts and realize that important changes, supported by a public opinion majority, are easier than we think to achieve (See my new short book, Breaking Through Power: It’s Easier Than We Think).

Departing with such plaudits as this observation of Austin Mayor Steve Adler that “his impact on our lives may well live forever,” Smitty is retiring from civic active duty this year. At least he thinks he is.