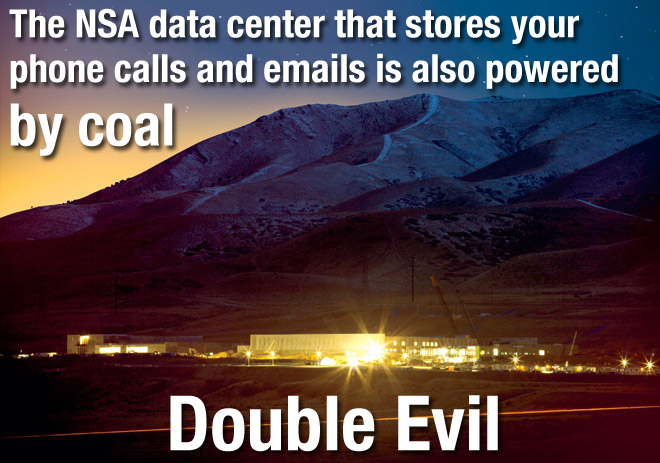 On Sunday, November 24th, the NSA data collection center was targeted by US citizens angered by violations of their first amendment rights to free speech and association, and their rights of privacy protected by the fourth amendment.  The citizens lifted a banner by helium balloons, created by The Backbone Campaign, measuring 26 feet square, containing the message:  Water, Energy, Tax $; NSA: Guzzling Billions to Steal Our Liberties.

The data collection center, located at Camp Williams in Bluffdale, Utah covers 1 million square feet, 100,000 of which is purely for computer servers and storage hardware, to store the data illegally collected from phone calls made in the US, to the US or from the US, and any other data transmitted through the telecommunications networks.  It also houses a code-breaking program to de-encrypt confidential communications like financial transactions, stock transactions, and legal documents.

Walter Mason, Coordinator for the Utah Justice Party, is outraged.  “I’m very angry that my own government is spying on me. My work revolves around justice issues and a return to the rule of law.  It is outrageous that we spend billions of tax dollars on this illegal surveillance operation when so many people are in need.  It’s time for us to start fighting for our rights.”

“Outrage doesn’t quite capture my feelings,” said Laura Bonham, a board member of Move to Amend and a supporter of the Bill of Rights Defense Committee.  “When I learned that this one spy center uses 1.7 billion gallons of water to cool its servers, I was stunned.  We live in a desert state, often under forced water restrictions.  We have a situation where the government has taken a valuable, limited, and life supporting resource to use for the very purpose of undermining our rights–and our legislature let them get away with it.”

According to Jonathan Ruga, Co-chair of the national Justice Party, “Notwithstanding its reported LEED Silver status, the carbon footprint of this place is huge.  It uses 65 megawatts of energy, supplied entirely by coal burning plants.  That’s enough wattage to illuminate all of Salt Lake City.”  Ruga went on, “This center and the surveillance state behind it is costing all Americans–not just Utahns–billions in energy, water, and tax dollars–all this to illegally spy on law-abiding citizens.  Metaphorically, we are providing the government with the very whip it uses to beat us.”

The handful of irate citizens decided to take action after coming together in Salt Lake City to protest the final negotiations of the Trans-Pacific Partnership (TPP), which have also been shrouded in secrecy.

“All this secrecy is killing us,” Bonham added.  “Between spying on US citizens by our own government and corporate collusion to pass the TPP, which has less to do with trade than with the trampling of the rights of people, nature, and nations by the corporate elite, our democratic republic is at a breaking point.  Patriots of all persuasions, as the true defenders of democracy, have a duty to stand up against this onslaught and secure the blessings of liberties for “We the People’,” including those who have been historically oppressed.”