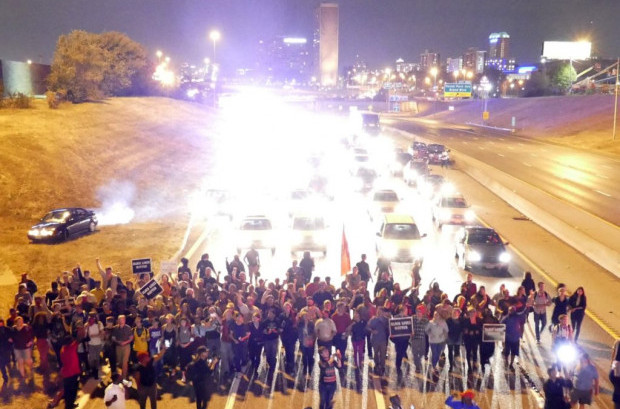 Above Photo: Protesters March Down  I-64 in STL Tuesday evening 10/3/17. Richard Reilly-@rrconstructor on ig and twitter.

After 19 days of protesting, it seems that finally the St. Louis Metropolitan Police Department is starting to see the light. It’s really expensive to pay these geared up cops… to the tune of 2.9 million dollars in overtime so far. Officers are beginning to reconsider their career choice. They are tired and frustrated, and the angry protesters insulting them is indeed making some of the cops feel bad about themselves, by being frankly told exactly what people think of their profession. There are a few cops that have a shred of humanity left, and are ashamed of how peaceful protesters are being treated. And I know for certain that there are officers who continue to retain their professionalism, and are appalled at the embarrassment their coworkers are creating for the police department as a whole. Of course, we’ll never see those kinds of admissions publicly, because that would be a sign of weakness and division, and these could be taken advantage of! But we see them.

No justice, no profits! 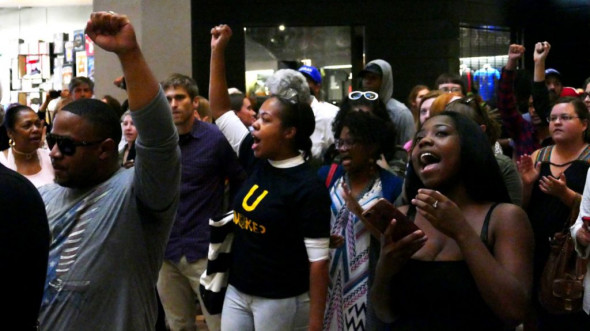 Meanwhile, the local economy is taking a pretty serious hit, which has been the intended effect. Not only are stores closing when protests take over a location, and blocked streets causing drivers to not be able to reach their destination, but Amazon is seriously reconsidering their city of choice in the Midwest. They like that St. Louis has lightrail, which is a requirement for their business location. However, it seems they didn’t actually pay attention to how poorly designed our limited east-west train system is, serving mostly poor areas. It doesn’t go anywhere near the white flight areas that the execs would quickly find they would prefer to live in.  The rich white people continue to reject the expansion, because it might cause the “urban people” to move in. Then, as the execs looked out the windows during their #Amazon2STL event, they saw the chaos in the city.

Per Fox Business, Amazon said a “compatible cultural and community environment” that included diversity, a high quality of life and stable business climate were key.  Uh oh, that’s not the severely racially and economically divided St. Louis, a hotbed of controversy with its killer cops. That’s okay though, St. Louis really can’t afford the development, or any further gentrification from that monster moving in anyway. St. Louis needs to fix St. Louis, because Amazon absolutely will not. 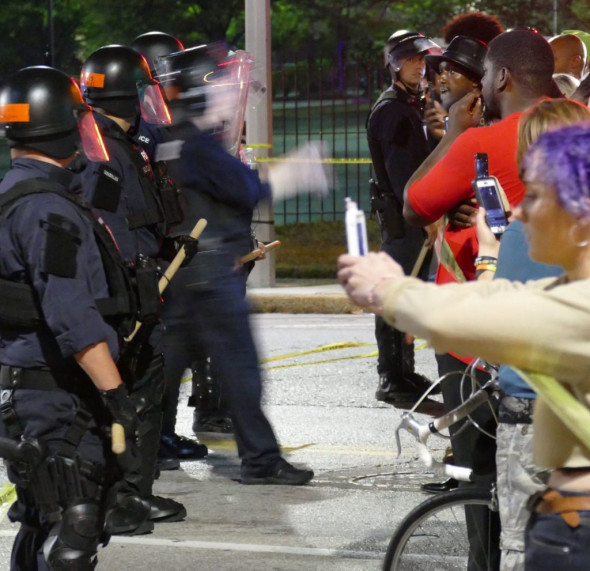 First and foremost, the number one “demand” from black protesters and citizens of St. Louis is “Stop Killing Us”.

There is NO debate on this point.

So how do we move forward? How will protesters be appeased? How will peace be restored? Ohh, I don’t know… Maybe their very realistic demands should be met. Here’s the list of demands, and they are not unreasonable at all to anyone that has been paying attention, aside from the people that they directly affect the livelihoods of.

We will expand upon and add to the list:

Remove militarization from the police department. Period. Police officers go to police academy. They don’t go to military boot camp. Teaching people who signed up to be officers to act like soldiers isn’t what they signed up for, nor should we have to fear military tactics from people who have never enlisted. In trying times like this, the last thing we need is an army of drafted soldiers, because they didn’t sign up for a military branch. This will specifically include 0311 Tactical Solutions, LLC and its dirty owners, Sergeant Brian Rossomanno, and Captain Mike Deeba, as well as their instructors that double duty as the SWAT team – which we will be visiting soon. It’s like these two men have created their own miniature military complex with a private army that Rossomanno sics on completely peaceful and non-threatening protesters. While we acknowledge that there are indeed life-threatening and volatile situations that require strong tactics training, not every situation is, and should not be treated as such.

Reduce police budget, increase education budget. This goes hand-in-hand with the above subjects. Removing the militarization reduces the cost of training employees and overpowered gear. Redirect that money into funding education in areas that desperately need it. I’m sure city schools could find much better things to do with the $2.8 million that has been dropped on oversized police forces’ overtime than brutalizing people. Not to mention, the incredibly high amount of funding pumped into the police has done nothing to reduce the incredibly high crime in St. Louis. 40% of St. Louis’s general funding during average times in the city should absolutely be reduced, and removing 0311 would be a pretty easy budget trim. In addition, Proposition P is a bloody joke.

Fire the bad cops, replace them with street-level bureaucrats. SLMPD knows who their bad cops are, and they know that there is zero reformation for these guys. While they might not be the homicidal ones, you can bet that they influence the mindset of ones who end up becoming the killers. They pass on their bigotry and hatred like a plague, spewing incessant disrespect for fellow humans who are just going about their daily lives. This barrage poisons others’ minds, especially impressionable new officers. Everyone knows that sensitivity training is useless, or these cops would all be sweet, delightful butterflies with the amount of it they get fed. It should be more aptly named desensitivity training. The only solution is to fire them. It is highly unlikely that that fateful day that Jason Stockley killed Anthony Lamar Smith was the first day he brought his AK-47 to work. He was certainly already proving to be a bad seed well before he decided to kill a motherfucker, don’t you know? Instead of replacing them with new beat cops, put in street-level bureaucrats to bring positive leadership and community support roles. Instead of shooting people, they should be shooting hoops with neighborhood kids. This can help create trust that has very rightfully been withdrawn by the racist, aggressive, hateful cops. I have a pretty strong hunch that a lot of St. Louis’s crime, specifically homicide, is directly linked to an innate fear of calling killer cops on a situation before it’s already gotten out of control. Because nobody wants to invite a killer to their door, or at least a hateful brute that would most likely escalate an issue tenfold. The latter is the exact kind of experience I’ve had personally, having watched it nearly escalate to the former, and is the reason that I don’t call the police until it is absolutely vital.

Remove SWAT, chemical munitions, and Rossomanno from protests. We don’t need the cops disturbing our peace and  rioting during our protests, as we have seen every night that Rossomanno has sent his personal army to attack peaceful protesters unprovoked. We’ve gotten along just fine with the cops on bikes and wearing polos, even with – gasp – black people being present! The first few nights of isolated vandalism was done by only a handful of people who were swiftly dealt with. And the mere presence of the riot gear agitated each scenario. When the police are geared up for a fight, it says to everyone that they are looking for one. Hands off. Stand down. We’re capable of handling ourselves.