Civil Disobedience In Hong Kong Or US Color Revolution Attempt?

Note: Readers may have noticed that we have not been reporting on the Hong Kong protests with intensity. It is not because the protests are not impressive, they are. The problem for us is that we cannot tell the level of US influence over the protests. We have seen impressive protests in many parts of the world and sometimes only after they are over, is the US involvement evident.

China is the top priority of US foreign policy and it has been for quite some time. The US has changed it national security strategy from the failed ‘war on terror’ to ‘great power conflict’ with China and Russia as the top two powers with which the US is concerned.

When we see protests against countries the US is targeting, we first look to see overt US involvement. Among the places we look is funding from the National Endowment for Democracy. NED is the overt regime change organization funded by the United States. As Le Monde Diplomatique reported in 2008: “The National Endowment for Democracy (NED) was created in 1983, ostensibly as a non-profit-making organisation to promote human rights and democracy. In 1991 its first president, the historian Allen Weinstein, confessed to The Washington Post: “A lot of what we do today was done covertly 25 years ago by the CIA”

Through its four core organisations: the American Center for International Labour Solidarity led by the AFL-CIO now known as the Solidarity Center, the Center for International Private Enterprise, led by the US Chamber of Commerce; the National Republican Institute; and the National Democratic Institute, led by leaders of the two big business parties, NED has developed a much more sophisticated regime change operation. NED invests in non-governmental organizations, youth leaders and media to gradually build opposition to the target government. NED has been doing this in Hong Kong for many years.

This video from Russia Today, specifically discusses how the groups behind the current Hong Kong protests have been funded by NED.

Hong Kong democracy activists were caught on camera meeting with Julie Eadeh the political unit chief of US Consulate General in Hong Kong during the protests:

There were reports suggesting Julie Eadeh is a trained subversion expert at the US consulate in Hong Kong. Her meeting with HK protesters would be evidence of US inciting and instigating the riots in Hong Kong. Is she under the direct order of former CIA chief Mike Pompeo? pic.twitter.com/jHazIpMM4K

Exposing the identity of Eadeh greatly upset the United States and resulted in the US calling China a “thuggish regime” for identifying her. Protesters did not understand the concerns they said, since they had met with US officials in DC. Eadeh has been engaged in diplomatic missions across the globe, including “hot spots” from Baghdad to Beirut to Jerusalem to Taipei and Shanghai during her lengthy career with the US State Department.

So-called democracy activists from Hong Kong have indeed met with US officials when they have visited the US. Here they are meeting with a China-hawk, the Chairman of the House Foreign Affairs Committee as can be seen in this photo of Hong Kong democracy activists Nathan Law and Agnes Chow meeting Rep. Eliot Engel. 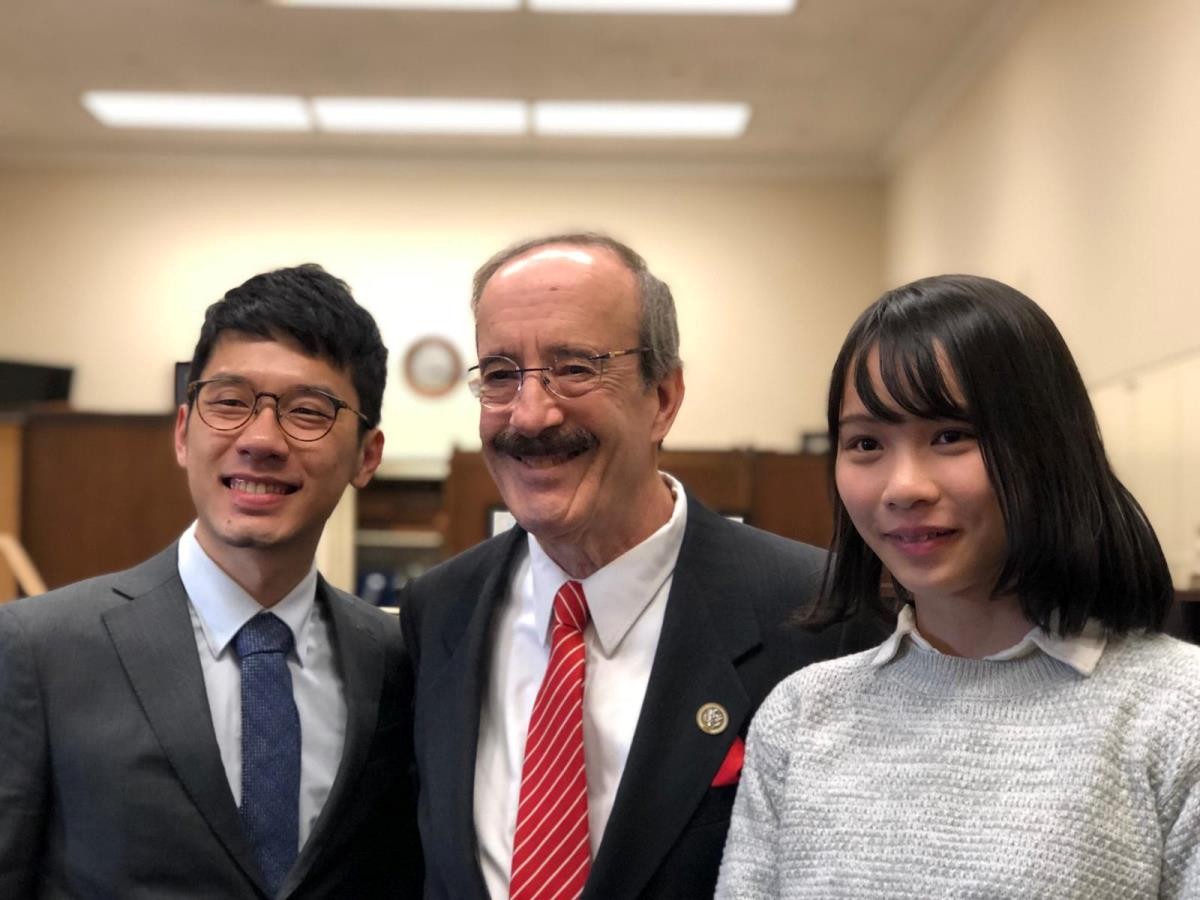 These protests also seem to be using tactics we have seen in US regime change operations in Ukraine, Venezuela and Nicaragua in recent years. The protests become violent — attack authorities or bystanders — seeking to get the police to respond with violence to video the police and claim they are being violent against protesters.

Protesters attacked and beat a Global Times reporter, Fu Guohao. One protester used a US flag to beat Fu as he lay on the floor and while he was taken away by ambulance workers. Other protesters and first aid workers attempted to stop some who tried to trample the man, while pro-democracy lawmaker Kwok Ka-ki crouched beside him and tried to calm the attackers.

After a heated argument, protesters allowed ambulance workers to take the man away on a stretcher.

Fu Guohao, reporter of GT website is being seized by demonstrators at HK airport. I affirm this man being tied in this video is the reporter himself. He has no other task except for reporting. I sincerely ask the demonstrators to release him. I also ask for help of West reporters pic.twitter.com/sbFb0L3s92

Kiddo street fascists in Hong Kong are going around beating people with poles flying the US flag & carrying pepe signs yet my mentions for the past two days have been filled with attacks from leftists for showing how the US is funding protest groups there pic.twitter.com/wXIz5i8HiQ

Here a group of protesters beat up a bystander:

Hong Kong has seen a number of cases of black-clad rioters using deadly violence against citizens,For example, in video, several thugs hit a citizen in the head with weapons,Journalists at the scene did not stop the rioters or report on their attacks on civilians #hongkong #香港 pic.twitter.com/rp6YXnCYmC

In this video, they suckerpunch a driver at a road block

Mobsters everywhere in town. But if they have enough guts to fight, why masks?pic.twitter.com/OAXBzr2obf

There is no doubt there are political issues between Hong Kong and China. With US regime change operations, there are usually legitimate issues that the US takes advantage of, but there is also no doubt that the US has been encouraging opposition to China and interfering in the internal affairs of China. Hong Kong and China need to develop their relationship without US interference. For all of these reasons we have been very cautious in reporting on the Hong Kong protests.

As the saying goes, if it walks, talks, and quacks like a duck, chances are it is one.

What’s been going on for months in Hong Kong has all the earmarks of a US orchestrated color revolution, aimed at destabilizing China by targeting it soft Hong Kong underbelly.

In calling for reunification of China in the early 1980s, then-leader Deng Xiaoping said Hong Kong and Macau could retain their own economic, financial and governmental systems, Taiwan as well under a “one country, two systems” arrangement.

The above would be something like what the US 10th Amendment stipulates, stating: “The powers not delegated to the United States by the Constitution, nor prohibited by it to the States, are reserved to the States respectively, or to the people.”

Each of the 50 US states has its own electoral system, governing procedures, and laws that may differ from federal ones.

Dubbed Occupy Central, China’s leadership is well aware of what’s going on and the high stakes. Beijing is faced with a dilemma.

US war on China by other means aims to marginalize, weaken, contain, and isolate the country — because of its sovereign independence, unwillingness to bend to US interests, and its growing political, economic, financial, and military development.

China’s emergence as a world power threatens Washington’s aim to control other countries, their resources and populations worldwide.

The US eliminated the Japanese economic threat in the 1980s, a similar one from the Asian Tiger economies in the 1990s, and now it’s China’s turn to be taken down.

Its leadership understands what’s going on and is countering it in its own way. China is a more formidable and resourceful US adversary than earlier ones.

Its strategy includes taking a longterm approach toward achieving its objectives with plenty of economic and financial ability to counter US tactics.

It may become the first post-WW II nation to defeat Washington’s imperial game, making the new millennium China’s century in the decades ahead.

US strategies to control other nations include preemptive wars of aggression, old-fashioned coups, and color revolutions — what appears to be going on in Hong Kong.

This form of covert war first played out in Belgrade, Serbia in 2000. What appeared to be a spontaneous political uprising was developed by RAND Corporation strategist in the 1990s — the concept of swarming.

It replicates “communication patterns and movement of” bees and other insects used against nations to destabilize and topple their governments.

Their mission is disruptively subverting democracy and instigating regime change through labor strikes, mass street protests, major media agitprop, and whatever else it takes short of military conflict.

Belgrade in 2000 was the prototype test drive for this strategy. When subsequently used, it experienced successes and failures, the former notably in Ukraine twice — in late 2004/early 2005, again in late 2013/early 2014.

US color revolution attempts have a common thread, aiming to achieve what the Pentagon calls “full spectrum dominance” — notably by neutralizing and controlling Russia and China, Washington’s main rival powers, adversaries because of their sovereign independence.

Controlling resource-rich Eurasia, that includes the Middle East, along with Venezuelan world’s largest oil reserves, is a key US imperial aim.

Swarming tactics are being used in Kong Kong. According to RAND strategists John Arquilla and David Ronfeld, it’s war by other means.

It exploits the information revolution and social media to take full advantage of “network-based organizations linked via email and mobile phones to enhance the potential of swarming.”

In 1993, Arquilla and Ronfeldt explained that “warfare is no longer primarily a function of who puts the most capital, labor and technology on the battlefield, but of who has the best information” and uses it advantageously.

State-of-the art IT techniques use “advanced computerized information and communications technologies and related innovations in organization and management theory,” they explained.

Cyberwar today is what blitzkrieg was to 20th century warfare, involving “irregular modes of conflict, including terror, crime, and militant social activism.”

Both strategists believed swarming could “emerge as a definitive doctrine (to) encompass and enliven both cyberwar and netwar.”

They called swarming a way to strike from all directions in an overwhelming fashion, believing what works in combat theaters can be effective in waging war by other means in cities.

The strategy appears to be in play against China by targeting Hong Kong.

On August 12, Beijing’s official People’s Daily broadsheet said the city “is not and shall not be the frontline of US and China,” adding:

“Hong Kong has been rocked by chaos and violence for weeks, and the violence is getting more and more intense.”

“What is going on in Hong Kong? There is already evidence of interference by foreign forces.”

“As Chinese officials have pointed out, the situation in Hong Kong bears the features of a (US-orchestrated) color revolution.”

“US politicians have openly supported the unrest, and anti-China forces are working behind the scenes.”

“(T)he US government often uses democracy promotion to attack other countries, and China has always been a major target.”

“Some US politicians dream of making China look and act more like the United States. One reason we are seeing increased pressure on China is because those who have tried to change China over the years via other methods have failed and there is growing fear that China is getting too powerful, so the Uncle Sam will never miss any opportunity to undermine China.”

“…Hong Kong is Chinese territory. This means that the city is not and shall not be a playground for anti-China forces.”

“China is no longer a poor and weak country that cannot stand up to foreign interference.”

“The country has enough methods and strength to quickly quell the unrest and smash foreign plots when such actions are deemed necessary to protect national sovereignty and the prosperity and stability of Hong Kong.”

Beijing will deal with what’s going on in Hong Kong in ways it believes are most effective.

US destabilization and other hostile tactics make resolving major bilateral differences all the harder.

If Trump regime anti-China hardball tactics accelerate already weakening global economic conditions, including in the US, DJT could end up a one-term president.

Sino/Russian unity is also being strengthened to counter hostile US actions — a vital anti-imperial alliance US strategists fear.