Trump has yet to tweet a response to all the needling. But his team may be realizing months too late that it’s up against a foe it didn’t reckon with.

Donald Trump may be a master of combat on Twitter, but he’s suddenly run into a growing digital uprising — anonymous federal workers who are using social media to tweak the president even as his agencies crack down on information-sharing.

This Twitter rebellion, apparently centered at the National Park Service, is winning cheers from liberal activists who seize on every 140-character outburst for signs of anti-Trump resistance. It’s also forcing Trump’s agencies to mount a whack-a-mole response, as they delete tweets about climate change and order employees to stay quiet online, each time stirring up headlines alleging an information lockdown.

The Twitter brushfire showed no signs of slowing Wednesday.

“More redwoods would mean less #climatechange,” tweeted Redwood National and State Parks in California, touching on a topic that had made South Dakota’s Badlands National Park the toast of liberal Twitter the day before. Death Valley National Park posted photos of a Japanese-American prisoner interned there during World War II — on the same day, The Associated Press noted, that Trump was announcing immigration restrictions and construction of a border wall.

Also getting into the act were non-government-sponsored Twitter feeds purporting to come from “unofficial resistance teams” at the park service, the EPA and NASA.

Trump has yet to tweet a response to all the needling. But his team may be realizing months too late that it’s up against a foe it didn’t reckon with: Thousands of federal employees and contractors have access to government Twitter accounts. And of course, anybody can set up a non-government account when the official channels are off-limits.

Some experts blame the mess — including some agencies’ sweeping social media bans — on Trump’s transition team, especially its slow progress in getting to know the many offices and entities the new administration is inheriting. That includes a federal workforce that the Obama administration had largely empowered to tweet freely.

“A blanket freeze is absurd, and it’s a result of the Trump administration not doing the advance work of staffing their agencies,” said Tracy Russo, who was the director of new media at the Justice Department from 2009 to 2013.

Russo was part of a wave of social media experts, many from in and around the 2008 campaign, installed by the Obama team across federal agencies both as political and career staffers. Being a federal tweeter requires a great deal of discretion, she said, but “people have come to rely upon these sources of information, like what a park’s conditions might be in winter.”

People familiar with the National Park Service say employees there harbor an especially heavy load of angst about the new president, who has dismissed climate change as a “hoax” and has laid out an aggressive agenda to roll back regulations and trim the federal workforce.

“They’re worried,” said Kristen Brengel, the vice president for government affairs at the National Parks Conservation Association, who says her organization has talked to career park service employees. She said her group has also reached out to the “alternative” park service Twitter account but hasn’t yet determined if agency employees are behind it.

The park service poses a particular headache for Trump, experts say: It’s a sprawling agency, with a singular focus on protecting natural and cultural treasures, and his approach on climate issues puts him at ideological odds with many in its workforce. And its parent agency, the Interior Department, issued social media guidance during the Obama administration that it left intentionally vague to encourage online activity, says one former agency official who would not be identified because of his current position.

Obama had won the White House partly on the strength of social media, including Twitter, a service that first launched in 2006. People on his team say his administration saw the creation of agency social media accounts as a way to encourage participation in government.

“It was to say [to the public], ‘You were involved in the campaign, and you should also be involved in government,’” said Merici Vinton, a veteran of the 2008 Obama campaign who later held a career post in his administration. “But every agency had to figure out their own tolerance for risk, their own funkiness, their own voice.” (The Treasury Department’s tweets, for example, can move markets.)

Across the federal government, social media is in the hands of people with varying levels of job protections. Many agencies’ highest-ranking new media directors are political appointees, serving at the pleasure of the president, while those doing the day-to-day posting on the social media accounts of sub-agencies and offices may be career government employees or contractors. 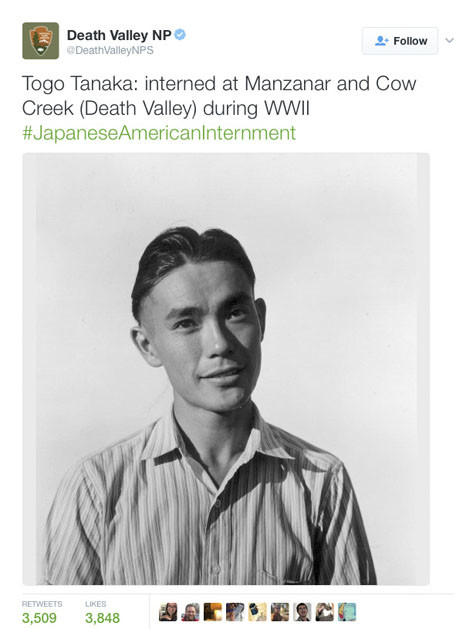 So for example, the new-media directors at the Justice, Energy and Interior departments have all been political appointees. But the lead tweeters at the FBI, DOE’s national laboratories and Interior’s individual national parks are civil servants, and thus far more difficult to get rid of.

In all but the biggest national parks, like Yellowstone or Yosemite, the Twitter accounts are controlled by teams of one or two employees working in park headquarters all over the country, the former Interior official said. Those workers hold the account passwords and get little oversight from Washington. But they do share among themselves best practices and techniques for crafting smart tweets, the official said.

For whatever reason, the park service’s Twitter accounts started showing startling political boldness on the day of Trump’s swearing-in.

Those included one retweet showing, side by side, photos of Trump’s inaugural crowd and the visibly larger turnout at Obama’s first inauguration in 2009. Another retweet commented on the removal of climate, health care and civil rights information from the White House website.

The Interior Department responded by ordering an all-out Twitter ban Friday night that remained in place until the park service had apologized on Saturday. “All bureaus and the department have been directed by incoming administration to shut down Twitter platforms immediately until further notice,” said an internal email first publicized by The Washington Post.

On Tuesday, as similar social media blackouts spread across agencies including the EPA and the Department of Transportation, the White House was insisting that the administration was not clamping down public communications. Meanwhile, Badlands National Park’s account was posting a series of tweets widely seen as pokes at Trump’s climate stance — in the guise of politically neutral facts about climate change.

“Today, the amount of carbon dioxide in the atmosphere is higher than at any time in the last 650,000 years,” said one of the Badlands tweets, which like the others soon disappeared from view.

The park service said it took down the Badlands tweets because they had been posted by a former employee not authorized to use its account. White House press secretary Sean Spicer offered a similar explanation for the original Inauguration Day tweets — but he said individual agencies were acting on their own in imposing any restrictions on social media.

“There’s nothing that has come from the White House,” Spicer told reporters Wednesday. “Absolutely not.”

Indeed, the origins of some of the directives remain hard to pin down — perhaps by design. One federal digital official said he saw only second-hand notes circulating through his agency this week telling employees to hold off on “public-facing communications,” including Twitter and Facebook.

“If you’re going to gag us, at least put it in an email,” said the official, who asked not to be named given that he is staying on under Trump.

Some defenders of the social media hiatuses noted that federal Twitter accounts are supposed to speak for the agencies, not serve as individual employees’ political platforms. And even some Obama-era digital experts say it’s somewhat reasonable for the new administration to hit pause.

“Any White House comes in and needs to learn how to be a White House, and part of the learning process is figuring out what’s OK to control and what’s not,” said Jesse Lee, who spent eight years in the Obama White House’s digital and communications operations, most recently as the director of rapid response.

That said, “the existence of climate change isn’t a question of policy,” Lee said, regarding the contested park tweets. “And they’re not sending out manifestos. They’re sending out scientific facts.”

During the Obama administration, the required sign-offs for any particular agency tweet depended both on the agency’s culture and the post’s content, according to several social media veterans.

Staffers were often free to tweet on innocuous topics — say, event announcements — without any clearance. Other tweets would be circulated internally with a note saying they’d go up at a certain time if no one objected. Only the most sensitive posts would be approved by agency communications directors.

Trump is, of course, known for tweeting with abandon. He’s finding, too, that many in the federal government he now leads have grown accustomed to having some measure of freedom, too.

“There were plenty of times that agencies put out data that didn’t make us look good,” said Lee, the Obama White House digital official, “like HHS.

“They were unhelpful on their face, and we spent a lot of energy putting them in context,” Lee said. “But we let that go, because that’s part of what HHS is supposed to do.”