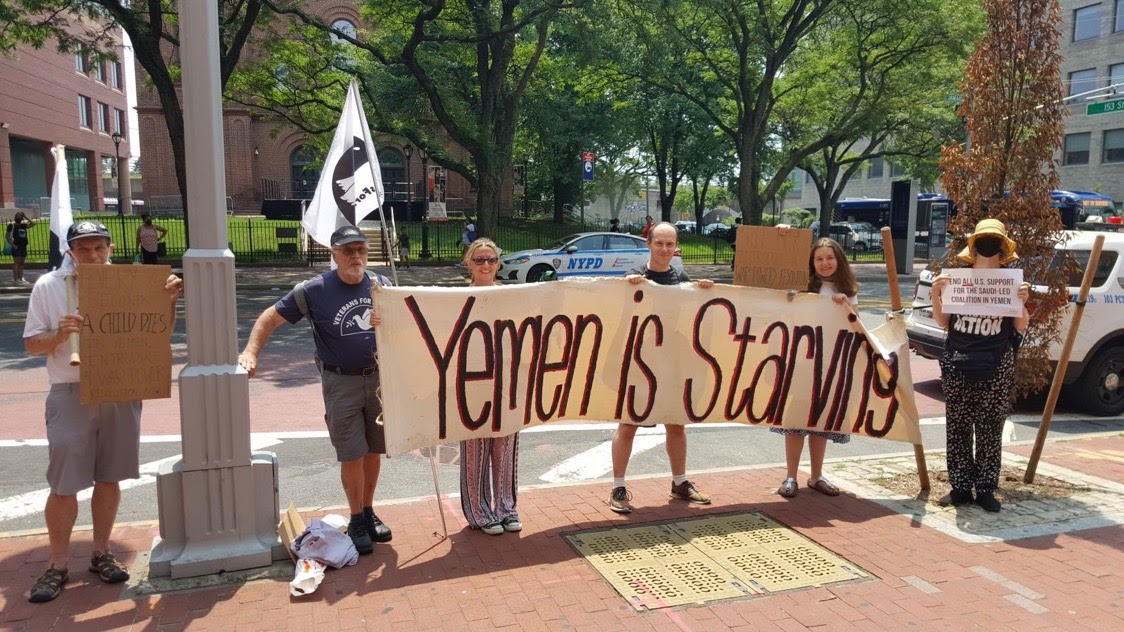 Dozens of organizations across the nation call on U.S. legislators to introduce a new War Powers Resolution to end U.S. support for the Saudi-led war and blockade on Yemen.

New York – Civil society groups rallied at U.S. legislators’ offices in New York, Boston, and San Francisco on Friday, July 16th as part of a National Day of Action for Yemen. They called for U.S. senators & representatives to introduce a new War Powers Resolution to end U.S. participation in the 6-year war and blockade on Yemen that has created the world’s largest humanitarian crisis, according to the U.N.

In Boston, Brian Garvey of Massachusetts Peace Action noted, “We’re not going to stop until we end the U.S. war in Yemen, and that means War Powers….It’s the only legislation that meets the urgency right now.”

During the Day of Action, letters were hand-delivered (see letter to Sen. Sanders below) to local offices of the following legislators signed by dozens of local civil society groups in each state calling for the new War Powers Resolution. Letters to these legislators will be delivered to their Washington D.C. offices today:

“If Joe Biden and the U.S. Congress wanted to end this war, they could do it today,” said Paul Shannon, the Founder of the Raytheon Antiwar Campaign. Legislators have been vocal this year on Yemen since Biden took office. Recently, a 76-member House letter to President Biden by Representatives Dingell, Pocan, and Khanna, urged an end to the blockade on Yemen. It was followed by a 16-member Senate letter led by Senator Warren, and a bipartisan letter from the House Foreign Affairs Middle East Subcommittee. Also, a coalition of 70-plus national advocacy organizations and celebrities sent a letter urging President Biden to take action to bring about an end to the blockade.

Definitive action is urgently needed as 16M people are still going hungry, and 5M are near famine, with a child under 5 dying every 75 seconds, according to the U.N. A bipartisan War Powers Resolution was passed in the Senate and House in 2019 but was vetoed by President Trump, and similar legislation is needed right now to end the crisis. “The inaction of Congress is complicity,” said Hayat Imam from Dorchester People for Peace. “The children are not just dying from the ravages of war, but also from this blockade.”

“President Biden promised us accountability for Saudi crimes, but he has yet to deliver. That means progressives in Congress like Bernie Sanders need to put their foot down. Millions of people’s lives from my home country of Yemen depend on it.”

“If a Yemen War Powers Resolution was passed multiple times under a Trump administration, then Congress should be able to introduce and pass it under a Biden administration. As chair of the House Foreign Affairs Committee, Rep. Meeks has the power — and responsibility — to save many lives by ratifying the will of Congress: He should introduce this resolution to finally end U.S. participation in the war on my beloved Yemen.”

“It is critical that Rep. Meeks introduces a War Powers resolution to end U.S. complicity in the worst humanitarian crisis on the planet. He has a significant amount of power to change the trajectory of the lives of thousands of Yemeni children.”

Thank you for leading the efforts in 2018 and 2019 to send a War Powers Resolution to President Trump’s desk and end U.S. complicity in the Saudi-led coalition’s horrific war and blockade on Yemen. We, the undersigned Vermont-based organizations, write today to urge you to introduce another War Powers Resolution to end ongoing US military support that is enabling the coalition to continue this war and blockade. While we appreciate President Biden’s early attention to Yemen, we believe that the steps taken by his administration thus far are insufficient to address America’s ongoing complicity in the war, blockade, and humanitarian crisis there.

According to the UN World Food Programme (WFP), 2.3 million Yemeni children under the age of five are suffering from acute malnutrition. 400,000 of these children are at serious risk of dying this year without urgent intervention. Given WFP’s warning in March that one Yemeni child is dying every 75 seconds, thousands of these children may have already succumbed to hunger this year. The millions of Yemeni children who continue to battle malnutrition will likely carry physical and cognitive scars for the rest of their lives.

The Saudi-led coalition’s blockade is a tactic of offensive, economic warfare and is a major driver of Yemen’s hunger crisis. Particularly since January, the coalition has imposed major restrictions on fuel imports into Yemen. In February, zero fuel was allowed to enter into Yemen’s major port of Hodeidah. In the months since, fuel import levels have remained far below pre-blockade levels as UN-approved cargo ships remain unable to dock. The resulting fuel crisis has had devastating humanitarian consequences, including hindering vital food shipments and causing hospitals to go without adequate electricity. While we strongly support renewed calls to increase funding for international humanitarian relief efforts, humanitarian aid cannot replace commercial imports. As WFP director David Beasley has said, the blockade must be lifted “immediately” as a “humanitarian act,” independent of political negotiations between the warring parties.

In recent months, we’ve been very happy to see a groundswell of momentum in Congress for ending the blockade. We greatly appreciate all of your support and leadership on recent letters calling on the Biden administration to use US leverage to press Saudi Arabia to lift the blockade, including the 76-member House letter led by Representatives Dingell, Pocan, and Khanna, the 16-member Senate letter led by Senator Warren, and the bipartisan House Foreign Affairs Middle East subcommittee letter. A coalition of 70-plus national advocacy organizations and celebrities also sent a letter urging President Biden to take action to bring about an end to the blockade.

After mounting pressure, Special Envoy Tim Lenderking said “unequivocally” that Saudi Arabia’s restrictions on commercial imports should be lifted and that the restrictions should be taken “off the table” in political negotiations. However, we are deeply disappointed that the Biden administration has thus far not indicated that it is willing to use any of the United States’ vast leverage to compel Saudi Arabia to end its blockade.

Furthermore, the Department of Defense acknowledged in April that the US continues to provide maintenance support and spare parts transfers that enable the Saudi-led coalition to continue offensive operations, including the enforcement of the blockade and continued airstrikes in Yemen. The White House also acknowledged in June that US military personnel are continuing to play an advising role in the coalition’s campaign against the Houthis. Because of the administration’s “disappointing non-answer” to the detailed questions raised in a January letter by 41 members of the House, it remains unclear what if any other forms of military support the US continues to provide to the coalition.

As you know, no US military support for the Saudi-led coalition’s war on Yemen has been authorized by Congress and Congress has repeatedly voted to cut-off this support, including by passing a historic War Powers Resolution in 2019. It’s also clear that no alternative legislative efforts, such as amendments to the National Defense Authorization Act, have been able to generate the kind of media attention and political pressure that is necessary to spur the administration to take action to bring about an end to the Saudi blockade. Further, because the administration has been unable to provide detailed information about the extent of ongoing US support for the coalition, a War Powers Resolution is necessary to prohibit any other forms of military support that may be ongoing or resumed in the future.

At this time, we believe it is urgent for Congress to reassert its constitution war powers to put an end America’s ongoing complicity in the humanitarian crisis that is being driven by the coalition’s war and blockade. We strongly urge you to introduce a Yemen War Powers Resolution to prohibit all forms of US military support that enables the Saudi-led coalition to continue its war and blockade on Yemen.

2. Vermonters for Justice in Palestine