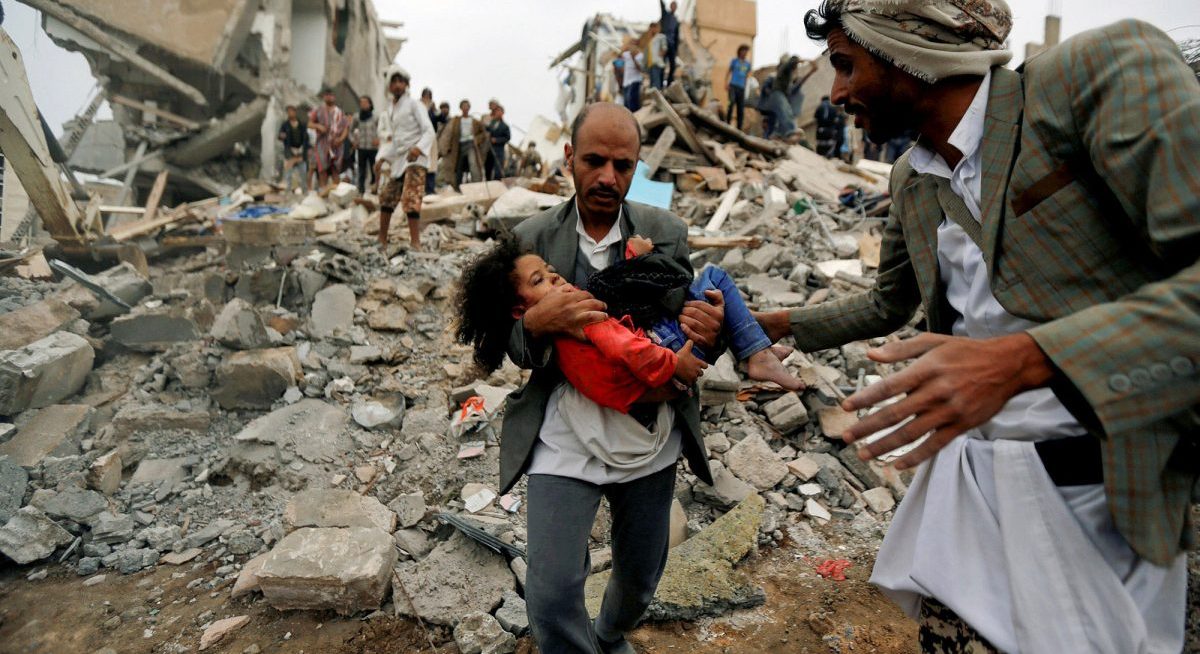 Civilian Deaths Are Never Acceptable As A Political Price

Above photo: A man carries Buthaina Muhammad Mansour, an injured girl rescued from the site of a Saudi-led air strike in Sanaa, Yemen. Khaled Abdullah/Reuters.

“The killing of children is appalling. Children should be protected at all times.” (Philippe Duamelle, UNICEF Representative to Yemen)

It should be an obvious truth that the deaths of civilians, and children in particular, as a result of military action can never be acceptable as a price worth paying to achieve any political aim. The most recent figures of deaths in Ukraine from The Office of the United Nations High Commissioner for Human Rights (OHCHR) verified a total of 564 civilian deaths during Russia’s military attack on Ukraine as of the 10th March, 2022. Of them, 41 were children.

In the worsening situation in Yemen, in the four months before the end of the human rights monitoring in October, 2021, 823 civilians were injured or killed in the war. In the four months that followed, it was 1,535 civilians, according to data from the Civilian Impact Monitoring Project. Large numbers of the civilian casualties were caused by airstrikes.

The UN Human Rights Council in October, 2021 rejected the renewal of the GEE’s (Group of Eminent Experts) mandate on Yemen. The group was the only international, independent and impartial mechanism to monitor the tragedy of Yemen. Until now the UN has described the bombing war and its knock on effects on infrastructure, medical care and nutrition as the “World’s Largest Humanitarian Crisis”..

The UN’s failure to renew the GEE’s (Group of Eminent Experts) mandate in Yemen was the first time the Human Rights Council of the U.N. has rejected a draft resolution since its establishment in 2006.

The UN Office for the Coordination of Humanitarian Affairs (OCHA) on the 1st December 2020 stated: “The war has already caused an estimated 233,000 deaths, including 131,000 from indirect causes such as lack of food, health services and infrastructure”.

This Report affirmed that “3,153 child deaths and 5,660 children (other casualties) were verified in the first five years of the conflict, and 1,500 civilian casualties were reported in the first nine months of 2020.”

Data from the Yemen Data Project reveals that in the two months following the dissolution of the Group of Eminent Experts (GEE) in October 2021, Saudi coalition bombing rates increased by 43%. The Assistant Secretary General reported that in December, 2021, 358 civilians were killed or injured as a direct result of increased hostilities. (Source: Rescue.org)

A year ago the United States implemented a temporary freeze on pending arms sales to Saudi Arabia and the United Arab Emirates, Saudi Arabia’s allies.  There were, however, inevitable exceptions in certain types of “defence weaponry” being allowed.  Nonetheless, the UK, the second largest military exporter to Saudi Arabia, refused to follow suit in implementing even a limited freeze on sales:

“The decisions the US takes on matters of arms sales are decisions for the US. The UK takes its own arms export responsibilities very seriously, and we continue to assess all arms export licences in accordance with strict licensing criteria,” James Cleverly, a foreign office minister, said. (Source: Middle East Eye).

Within a few months the United Nations Development Programme Report of 23rd November, 2021 announced that deaths from the conflict in Yemen would hit 377,000 by the end of that year (2021).

In response to this report CAAT’s (Campaign Against the Arms Trade) parliamentary officer Katie Fallon said:

“This horrifying report is a reminder that while the war in Yemen may have fallen off the news agenda, its devastating impact on the people of Yemen is as bad as ever…Promises by President Biden to end support for the Saudi coalition’s role in the war have not been fulfilled, despite a welcome halt to a few arms sales. Meanwhile, the UK government continues to supply arms to Saudi Arabia without restraint.”

The UK also provided and still provides  technical assistance and training by its military to assist the Saudi air force in conducting the air/bombing campaign of Yemen.

To return to Ukraine, there is indeed an urgent need to prioritise the protection of children from injury and death. This can only be achieved by a ceasefire, and firm resolutions to withdraw from conflict by both sides. The only realistic basis for peace would be a withdrawal of Russian forces to the Donbas region, and the establishment of Ukraine as a neutral and non-NATO country. The Donetsk and Lugansk regions should indeed be recognised as autonomous ethnic Russian republics.

The pouring of “lethal aid” (an obscene oxymoron) into the region by the U.S., U.K. and E.U., as a continuation of NATO’s deliberate and long-standing strategy of de-stabilisation in the region, must cease with immediate effect. Likewise, the warmongering statements of career politicians, the “straw men and women” of the U.K.’s parliament, for example, (seen as the worst offenders in Russia) must be robustly challenged for the cynical, sanguinary provocations they are; and, while we are at it, highlighting their hypocrisy in sponsoring the slaying of civilians, including already many thousands of children, at the same time, in Yemen.