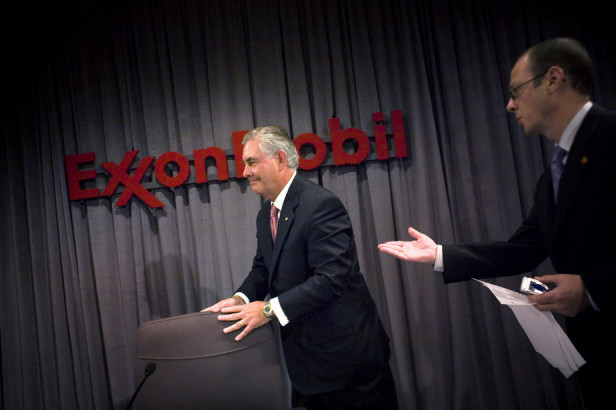 Investors allege Exxon should have adjusted its accounting of oil reserves based on what it knows about climate change and coming climate action.

ExxonMobil shareholders have filed a class-action lawsuit against the company, alleging it misled its investors and the public by failing to disclose the risks posed to its business by climate change.

The alleged deception resulted in stockholders paying inflated prices for Exxon stock and subjected them to financial losses because the company knew the value of its oil reserves was less than what it was telling investors, according to the lawsuit filed in Texas federal court earlier this month.

“Exxon has long understood the negative effects of climate change and global warming and their relation to the worldwide use of hydrocarbons,” according to the lawsuit.

“Exxon understood and appreciated that it was highly likely that it would not be able to extract all of its hydrocarbon reserves and that certain of those assets were ‘stranded.’ Yet Exxon publicly represented that none of its assets were ‘stranded’ because the impacts of climate change, if any, were uncertain and far off in the future.”

Exxon is the world’s largest publicly traded company, reporting $1.7 billion in profits the second quarter of this year. According to figures cited in the lawsuit, the value of Exxon stock dropped 13 percent from $95 a share in mid-July to $82.54 in late September and was $85.31 as of Friday.

The lawsuit, which could include hundreds of thousands of investors, seeks unspecified damages to reimburse stockholders for their losses and holds open the option for a judge to bar Exxon from the practices that led to the lawsuit.

These allegations of violations of the federal Securities Exchange Act by company officials add to Exxon’s legal woes as the company faces fraud investigations by the attorneys general of New York and Massachusetts.

The two investigations are being conducted under the states’ consumer protection laws to determine whether Exxon deceived consumers and investors about the role of its products in contributing to climate change.

The class-action suit alleges that Exxon breached its fiduciary responsibility to investors, but the legal bar remains high to prove the company intentionally deceived them.

Holding a company legally accountable requires proof that it failed to act responsibly based on its evolving assessments of climate risks, legal experts said.

The investors who filed suit purchased Exxon stock between February and October. They claim the company was aware of the connection between burning fossil fuels and climate change for decades, and understood that coming regulations could restrict development of some hydrocarbon reserves, according to the lawsuit filed in the Northern District of Texas.

Yet the company continued to file disclosure statements with the U.S. Securities and Exchange Commission (SEC), the federal regulatory agency that polices stock sales, saying everything was fine, the lawsuit said.

Exxon’s public statements—submitted to the SEC under the assurance of accuracy—that investors rely on when deciding whether to buy stock were “materially false and misleading” because they failed to disclose a number of factors, according to the lawsuit.

The SEC also has reportedly opened an investigation into Exxon to determine whether the company has been forthcoming with investors about climate risks and accounting issues concerning its reserves.

Among the cautionary signs that Exxon concealed from investors was the company’s own internal reports from the 1970s concerning climate change, which recognized the environmental risks caused by global warming, according to the lawsuit.

“Given the risks associated with global warming and climate change, the Company would not be able to extract the existing hydrocarbon reserves Exxon claimed to have,” according to the lawsuit.

As a result, the suit says, a significant portion of Exxon’s reserves should already have been written down; that’s a bookkeeping function that reduces the value of an asset because it has been overvalued.

Key to the complaint is the allegation that Exxon’s continued assertion that the company was on solid ground despite internally understating the potential impact of climate change resulted in an artificial inflation of stock values. Stock value took a hit when the company recently announced that it might be forced to write down nearly 20 percent of its oil and gas reserves, according to the lawsuit. It has since rebounded to roughly the price it was selling for in September.

“Specifically, the Company acknowledged that it might have to write down 3.6 billion barrels of oil sand reserves and one billion barrels of other North American reserves that Exxon now conceded were not profitable to produce under current prices,” according to the lawsuit.

Celia Taylor, a professor of securities and corporate law at the University of Denver, said shareholders will have a much easier task proving Exxon failed to lower the value of its oil reserves than proving it deceived investors about climate change’s role in charting the company’s future.

“That is a tangible element—that the company knew the value of the oil in the ground wasn’t what they knew it to be and failed to assign the true value to the asset.

“That is a stronger hook than the climate change hook. There would have to be a showing that officers and directors knew climate change posed risks and didn’t disclose those risks because they knew that would have a negative effect on stock value,” Taylor said.

That’s a tough task when disclosure requirements lack guidelines on precisely what has to be disclosed specific to climate change, she said.

Ryan McConnell, an adjunct professor of corporate law at the University of Houston Law Center, said class-action lawsuits of this type require proof that a company propped up the price of its stock by not disclosing information that would have influenced the stock value.

“They have to show causation where information from the company moved the stock price,” he said. “Otherwise how do you know the statements mattered?”

The next hurdle to overcome in winning a securities fraud case is proving the information related to setting stock prices was intentionally withheld, he said.

“There is always the debate about what should have been disclosed and when,” McConnell said.

“The fight is always about interpreting what is disclosed and what isn’t and what material consequence it had.”