Class And Race In Child Adoption

Despite the illusion of adoption as an altruistic child-saving social service . . .  adoption is deeply imbued in classism, nearly always redistributing children from economically at-risk “unmarried” or “too young” mothers and fathers, or those in temporary crisis, to adopters of higher socio-economic status who can afford the tens of thousands of dollars that babies cost.

Some call it Class Warfare. I have dubbed it Reverse Robinhoodism.

It is the poor states that produce the children and the rich that consume them. In this process, poor parents are left behind, serving only as the initial fabricators of other people’s children.

Most infants placed for adoption come from poor families. …This is a sad commentary on the richest and most powerful country in the world. Even poor married couples are relinquishing their children.

USA Today, May 18, 2009, cover story tells of Renee, a 36-year-old mother of three teens who earns $50,000 a year. Renee relinquished her fourth child, a baby she briefly breastfed because of financial strain on her and her children.

“ . . . the demographics of those in need of loving homes do not precisely match the demographics of those seeking a new child. Adoptive parents are disproportionately white. Adopted children are not,” David French, senior writer at National Review, and a white Evangelical Christian man from “middle Tennessee”, who together with his wife, adopted a child from Ethiopia.

Race has been a controversial issue in adoption for decades. In 1972 the National Association of Black Social Workers famously declared white adoption of black children to be a form of “cultural genocide.” Many still believe they were right. Cries of cultural imperialism and colonialism continue to question whether or not to place babies and children of color in white households, and now, in addition, there are questions about cost differences, and “white savior syndrome.”

The cost difference rises from the supply and demand manner by which adoptions are arranged.  “If you’re white, as most transracial parents are, it’s easier to adopt a nonwhite child because more of them are available for adoption. . . Worldwide, it’s often easier to adopt black, Asian, and Hispanic children than white children,” says Sharon Perkins, Advantages & Disadvantages of Interracial Adoption.

Jacquelynn Moffett, president of Homes for Black Children in Detroit agrees that the racially-skewed menu of prices to adopt children based on race “looks like a slave poster.” She adds: “As a Black person, it’s totally offensive.”

. . .racialized sadism that jumps off the pages and harkens back to the slavery era when white plantation mistresses, America’s first transracial adopters, meted out brutal treatment against enslaved Black children. The way Sarah and Jennifer were controlling these children—starving them, keeping them in line in this creepy way, humiliating them, calling them liars and gaslighting them—reeks of racialized control, amusement, and ownership.

White people also have a long history of fetishizing racial Others that they fear. Sarah and Jennifer would give every indication of having had a deep and unspoken inherent fear of Black people.

Celebrities such as Angelina Jolie, Sandra Bullock, and Madonna have not only role modeled adoption but glamorize Inter-racial adoption as the height of liberalism or what some call “virtual signaling” – far better than any bumper sticker can.  But “intent, like being colorblind, doesn’t really get you that far.”

LaSha writes on Kinfolk Kollektive: Blogging While Black, “Adopting Black Children is Not Your Chance to Prove You’re Not Racist.” She states:

No, adopting a black child is not an opportunity to prove you’re not racist or be heralded for wanting the undesirable and loving the unlovable.

A white parent adopting a black child must first understand that no matter how much they’d like to believe that race is not real or pretend they don’t see color, that black child is dealing with the very real social ramifications of his race and color. That parent needs to recognize that the needs of that black child are different emotionally, socially, mentally, and physically. That parent needs to be committed to the Herculean task of making their home, with all the subconscious subtle hostilities learned through decades of an inevitable socialization of suspicion, a space where that black child feels free from the ever-looming burden of racism. . .

She points out that Whites who adopt interracially need to be aware of the “baggage” of their privilege and that “the amount of money you make, the places that your kids have access to because of your status, class, and your Whiteness” don’t excuse you from considering what you need to do to help your adopted child of color adjust to a world other than the one he or she was born into.” 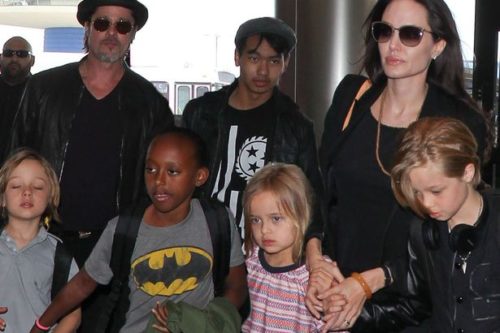 Jolie described a desire to create a “rainbow family.”  To some this is reminiscent of collecting souvenirs from places visited, or a desire to model a more multicultural world –  a world in which race is a non-issue.  But it is not any child’s responsibility to be used for your political motives, no matter how noble.

Making the world free of perceived racial differences is a worthwhile goal that might be better accomplished by interracially dating and marrying and having biracial children – difficult enough for many such children –  or adding an adopted child or children to that mix, rather than adopting a child into a family with no one who looks like him and putting the onus on an innocent child who did not agree to be a spokesperson for your cause.

Others, like the Frenches, adopt to fulfill an Evangelical act of charity as described in The Child Catchers: Rescue, Trafficking, and the New Gospel of Adoption by Kathryn Joyce. Ironically, French and others who, believe they are called by God to adopt, blame both the racist alt-right and leftists for disparaging them for doing so. French writes of “attacks” on his family from “the left” online and in person, bizarrely pointing to the adoption tax credit that was created to encourage special needs adoption which was expanded under Bill Clinton and made fully refundable under the Obama administration as his evidence.

French argues that adoptive families – all adoptive families – were caught in an IRS “dragnet” having to prove their adoption expenses were legitimate. What this has to do with persecution of interracial adoptive families is left to the bewilderment of readers of his Atlantic treatise. He concludes that compared to the alt-right, “at least” progressive critics didn’t torment them with photo-shopped pictures of his young child being killed.

Some are far more critical of White families who adopt interracially. LaSha says:

White people who adopt black children don’t deserve reverence and praise for doing the unthinkable. White parents of black children also don’t get to christen themselves black by proxy, carelessly draping themselves in the adornments of soul food, hip hop, and braided hairstyles they have been brainwashed to believe encompass the entirety of blackness. And black people most certainly should not be bestowing irreproachability on these people, as if a choice to adopt a black child demonstrates an absolute commitment to being anti-racist and deconstructing white supremacy.

A 1999 study published in “The American Journal of Orthopsychiatry” found that about 50 percent of Asian and Black adoptees felt discomfort over their racial appearance.

Prospective adopters can gain invaluable insights by reading the writings of adults who experienced being interracially adopted.  Many have been voicing their experience and their reality.  The blog Banana Writers gives voice to Asian adoptees.

One such prolific writer is Lucy Sheen, who is also an actor, poet and filmmaker, who describes her experience as an Asian adoptee growing up in the UK, “made in Hong Kong, exported to the UK in the late 50s early 60s” saying her face was a permanent reminder. She was “not like them, did not come from them.”

I was different. I was the ‘other’. I was something they had never seen before. It’s something that I battle with every day though now it’s at a subconscious level. Occasionally, someone or a situation will stand out and consciously make me take active umbrage or make me feel like I’m back in the school playground being picked on. But it’s not very often these days.

Another good source for learning what it is like being internationally and interracially adopted is afforded us by Jane Joeng Trenka author of: The Language of Blood, and Fugitive Visions: An Adoptee’s Return to Korea along with Outsiders Within: Writing on Transracial Adoption, which she co-wrote with Julia Chinyere Oparah. Also see Foreign Goods: A Selection of Writing by British East Asian Artists by Jingan Young.

Nicky Campbell, host of the TLC reunion show, Long Lost Family, who was adopted as a baby, notes that interracial adoption adds “an extra layer of identity problems” for children. He, and others, agree the issue is far deeper than “love.”  It would be helpful, if before considering an interracial adoption, White adopters made an effort to learn about White privilege and entitlement and what it means to be a good ally to POC, lest they unintentionally come from a position of savior.

If you adopt interracially you become an interracial family with all that entails, and you have to be prepared for people staring and asking uncomfortable and invasive questions, often in front of your child. If you are not prepared to deal with anti-Black sentiments prevalent in this nation, it is probably best not to add a Black child to your family.  Discrimination and racist remarks will not just be hurled at your child, but at you and any other children you may have, as well.  It can be extremely difficult for children of color who are adopted by families who live in lily-white communities as opposed to more urban and diverse neighborhoods.

The popular NBC series This is US featured some issues facing a Black boy as he grows into a man in a White family with two white siblings. Growing up, the character named Randall sought out others who looked like him, while his adoptive mother dealt with hair and skin care issues.

One would hope that pre-adoption counseling would make this clear and be part of any vetting process. However, adoption agencies in America placing children domestically or from overseas are businesses, concerned more about their bottom line by providing a child for those who are willing to pay for one above any concerns for child welfare. Even state foster care whether privatized or not rely on federal bonuses for completing adoptions.  Many who claim difficulty finding homes for Black children don’t do their due diligence. It is thus the responsibility of those adopting interracially to do their homework and be sure what their true motivation is and if they are up to serving the special needs of a child of color