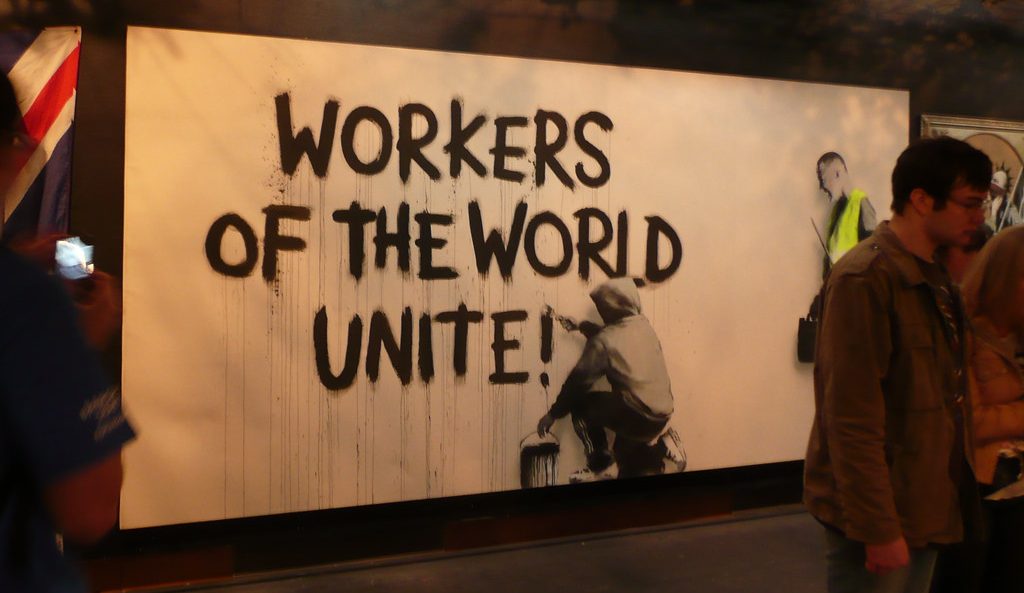 Looking at the history of what is called international relations, the world has experienced various stages of development (or underdevelopment). First, in the era of primitive accumulation, as Marx described, rising military powers in Europe traversed the globe. They occupied land inhabited by various peoples and kidnapped laborers from one part of the world and transported them to another as forced laborers. They developed trade, invested in profitable overseas production, and expropriated vital natural resources to facilitate their own economic development. Killing the occupants of the land and kidnapping Africans to become slaves in the Western Hemisphere, Marx said, signaled the dawn of “civilization.”

Thus, we can speak of class struggle whether the topic for discussion is land grabbing, enslavement, extracting resources, or transforming local economies to fit the needs of the colonial powers. Andre Gunter Frank suggests that looking back at the birth of capitalism as a world system, we see the seeds planted for “the development of underdevelopment.” The economic circumstance of what would become the Global North is growing riches and for the Global South deepening poverty and immiseration.

But what dependency theorists, scholar/activists such as Walter Rodney and Frantz Fanon, and Marxists from Latin America add to the narrative is the fact that capitalist imperialism periodically generates resistance and rebellion, sometimes class struggle, on a global basis. Contemporary theorist, Vijay Prashad (The Darker Nations: A People’s History of the Third World, New Press, 2008) reminds us that the globalization of capitalism from the seventeenth to the twentieth centuries generated resistance, rebellion, and revolution. Haiti, for example, represented a paradigmatic revolution, overthrowing French colonial control in 1804.

And during the nineteenth century and the first half of the twentieth century anti-colonial campaigns spread throughout the world. In 1945 there were 51 nations in the new United Nations organization and by 1970 there were 170. People had liberated themselves from the formal bonds of colonialism. Along the way anti-colonial campaigns gained support and solidarity from people of color within colonial countries and national liberation movements across state boundaries in the struggle for independence. In addition, revolutionaries overthrew colonial and/or neo-colonial powers in Cuba, Vietnam, Angola, Mozambique, and Nicaragua.

Once independence was achieved, “new” nations began to collaborate around an anti-colonial, anti-neo-colonial agenda. Many met in Bandung, Indonesia in 1955 and formed a Non-Aligned movement in 1961, expanding its membership and loyalties to 120 countries today. Its motivation was to break the traditional bonds of colonial control, to reduce the continuing relationships between the former colonial powers and “their” colonies, and to rectify historic forms of exploitation and expropriation of value. This, dependency theorists suggest, included challenging indigenous ruling classes in poor countries who owed their allegiance to collaboration with the former colonial powers. The bottom line for newly independent countries was to rectify the grotesque economic inequalities that were the legacy of colonialism and to achieve national sovereignty.

Along with the creation of a non-aligned movement, leaders of the Third World in the 1960s and 1970s campaigned for global adoption of a New International Economic Order (NIEO). This program was introduced in the United Nations. It called for the creation of rules and regulations that would regulate global capitalism so that it was not so disadvantageous to countries of the Global South. Proposals involved facilitating technology transfer from the Global North to the Global South, reducing onerous rules about “intellectual property rights,” hiring corporate executives from the host country, and establishing requirements that minimal amounts of profits derived from foreign investments stay in the host countries where production occurred. These and other proposals were designed to “reform” global capitalism such that the growing economic inequalities between rich and poor would decline.

The response of western imperial powers to the NIEO and the NWIO was to inalterably oppose virtually every proposal made. They objected to any restraints on the complete autonomy of international corporate and financial capitalists operating in the Global South. In addition, they resisted the right of countries of the Global South to have any control over the production of narratives about their countries.

And in response to growing mobilizations of countries and peoples of the Global South, financier David Rockefeller from the then Chase Manhattan Bank, called together 200 bankers, corporate CEOs, a few trade union leaders and politicians from Europe and North America to establish The Trilateral Commission in 1973. The founding documents warned of the greater dangers to global capitalism from unrest in the Global South than from the Soviet Bloc. They hired Zbigniew Brzezinski to administer the new organization and they commissioned scholars such as distinguished US political scientist Samuel Huntington to draft position papers for the organization. In one paper Huntington warned of the “excess of democracy.” In other words, the increased activism within societies and between societies constituted a threat to stability and the global status quo.

By the 1980s, the Soviet Bloc weakened, collapsing in 1989. The countries of the Global South became entrapped in a debt system that required them to adopt new austerity policies that worsened the conditions of life of their citizens. The policies, known as “neoliberalism,” spread across the globe. Many leaders of formerly anti-colonial regimes, including some independence leaders, began to collaborate with the international overseers at the International Monetary Fund and the World Bank.

Economic inequality on the world stage grew. At various times 10-20 percent of the world’s population lived in abject poverty and another 20-30 percent at living standards below a livable income. As the living conditions for the world’s citizens worsened, the globalization of production increased and smaller numbers of huge banks began to control more and more of the world’s economic life.

An upsurge of resistance to the worsening plight of much of the Global South began to occur in the 1990s. The day the new North American Free Trade Agreement (NAFTA) went in effect in January 1994, Sub-Commander Marcos of the Zapatista Movement (EZLN) in Mexico announced a new campaign against neoliberalism.

In addition, the formation of the World Trade Organization (WTO) in 1995 and the spread of neoliberal policies spurred growing resistance to globalization as citizens demanded their countries reject IMF imposed austerity programs. The anti-globalization campaign, based on grassroots movements from the North and South, gained worldwide attention during the founding meeting of the WTO in Seattle, Washington in December, 1999. The “Battle of Seattle,” signaled a global recognition that neoliberal globalization was bringing together activists from everywhere to challenge the globalization of capitalism. A World Social Forum assembled in Porte Allegre, Brazil, in 2001 with thousands of people from women, labor, indigenous peoples and other organizations. Their rallying cry was “Another World is Possible.”

In 2011, Arab Spring signaled another form of grassroots opposition to the further exacerbation of capitalism both within and between countries. Over the next several years, protests were initiated by various sectors of the working class, such as the precariat and “yellow vests,” indigenous peoples, women, people of color, gays, and lesbians. These campaigns often generated expressions of international solidarity.

And it is in this emerging global class struggle that the Bolivarian Revolution emerged. Army officer Hugo Chavez was elected President of Venezuela in 1998. Subsequently, he initiated changes and responded to demands for change from Venezuelan workers to build grassroots political institutions, form workers cooperatives, and to redistribute some of Venezuela’s oil wealth. Venezuelan policies significantly reduced the number of citizens living in poverty, increased access to health care and education, and encouraged the building of grassroots political organizations.

The Bolivarian Revolution, as it was called, borrowed from nineteenth-century Latin American leader Simon Bolivar who struggled to achieve national sovereign control for the peoples of the region. The twenty-first-century variant, led by Chavez, included initiating a regional Latin American bank, expanding trade agreements, and inspiring grassroots mobilizations in countries in Latin American and the Caribbean. Some variants of economic populism and grassroots political institution-building occurred in Bolivia, Ecuador, Nicaragua, Honduras, and El Salvador, Brazil, Argentina, Chile, Paraguay, and Uruguay. In addition, some Latin American countries began to collaborate worldwide to challenge the power and prerogatives of global capitalism.

The BRICS (Brazil, Russia, India, China, and South Africa), for a time, discussed ways to challenge the economic and political hegemony of the traditional great powers. Much of the Bolivarian Revolution was inspired by the Cuban revolutionary model of economic distribution, health care and education programs, and international solidarity.

The Global North Launches a Counter-Offensive

The United States and its allies in the capitalist world have based their foreign policies on resistance to reformist and revolutionary ferment in the Global South. Efforts to forestall dramatic historical change have sometimes been based on policies to accommodate or channel ferment from the Global South in directions that were less threatening to capitalism. For example, President Kennedy’s Alliance for Progress program, a $20 billion economic assistance program announced in 1961, promised US support for economic development and social change in Latin America. An alternative and more common approach, military force, is illustrated by President Johnson’s sending 24,000 marines to the Dominican Republic in 1965 to forestall a nationalist, Juan Bosch, from returning to power in his country.

Between 1965 and today, the United States has used the carrot and the stick to challenge resistance from the Global South, particularly in the Western Hemisphere: using military invasion and covert operations; identifying and working with economic and military elites in “enemy” countries, enacting economic sanctions, and even poisoning crops in countries defined as the enemy.

Today, the United States is seeking to crush the Venezuelan experiment and to destroy all vestiges of the Bolivarian Revolution in the Hemisphere. The project includes securing complete control of Venezuela’s oil resources. But, in addition, the United States is committed to turning back history; decades of resistance from the Global South. Following the inspiration of the Cuban Revolution, the Bolivarian Revolution has constituted the most sustained threat to US global hegemony in the Western Hemisphere, and hence the international system. History has shown that John Bolton’s “troika of tyranny” is just the latest conceptualization coming from the Global North; a conceptualization that Professor Huntington warned of in 1976, as the “crisis of democracy;” that is, there was too much of it.

In 2020, efforts by the United States to crush the spirit of resistance continue. The United States has tried to subvert Venezuelan democracy, launched a crippling economic blockade, threatened war, declared President Nicholas Maduro a criminal, and moved more troops into Latin America. The effort to bring down the Cuban Revolution continues: a crippling blockade, policies to reduce tourist travel to the island, and even using propaganda and economic pressure to undermine Cuba’s extraordinary medical contributions to fighting the coronavirus around the world.

In sum, human history in the capitalist era is about the drive for power and profit on the one hand and resistance and rebellion on the other. The outcome of this struggle is still to be determined.

(For a parallel historical analysis see Vijay Prashad, “12-Step American Method for Regime Change, Alternet, February 9, 2019  and “Blood for Oil in Venezuela?” an interview on The Real News, February 10, 2019 https://therealnews.com/series/venezuela-coverage-and-analysis )

From a larger essay:   https://heartlandradical.blogspot.com/2019/02/the-north-south-struggle-is-class.html