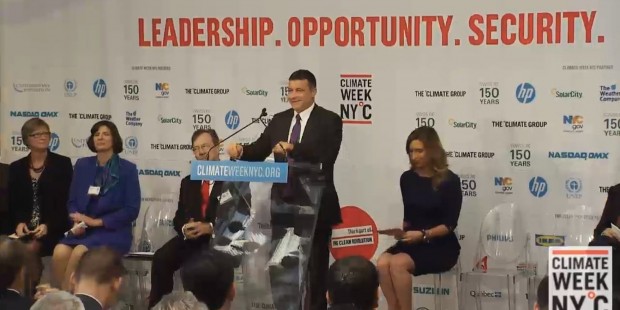 Above photo: The Climate Group “will bring together CEOs from the world’s leading companies, heads of some of the world’s largest sub-national governments and civil society leaders, to provide a shared vision for a low carbon economy.” From http://www.huffingtonpost.com/2013/09/23/climate-week-nyc-2013_n_3975339.html

Climate Action vs. Climate Justice: the Need for Clear Demands at the Peoples’ Climate March in New York City

350.org and Avaaz originally called for the march, but environmental and climate justice organizations and alliances based in the New York/New Jersey region and across the US demanded (and won) a seat at the organizing table to attempt to ensure that the voices of front line and impacted communities are heard.

So, what are the demands of the march? There are none. That’s right. The march will simply bring together an estimated 200,000 people to march through the streets of New York and then…

There will be no rally, no speakers, and no strong political demands. Just people showing up with the overarching message that the world’s leaders should take action on climate change. Why no solid demands? I’ve been informed by organizers that the reason this march is being held with no actual demands is because we need a big tent.

A big tent, as in, the circus is coming to town… But this tent is so big that it even includes organizations that support fracking and the tar sands gigaproject. Yup, they’re in the tent, too. Call me crazy, but I think that tent is too damn big.

According to some of the organizers, as long as everyone agrees that climate action is needed, then it’s all good. But are all climate actions created equal? No.

In fact, there is another entity called The Climate Group that is planning a whole week of activities around the Ban Ki-moon summit to call for “climate action.” Who is this Climate Group? They are a self-described “campaign” whose goal is a “low carbon economy.” Okay, so? Well, their idea of action on climate change includes many “solutions” debunked as false by the global climate justice movement, including carbon capture and storage, and other technologies that allow business as usual to bounce happily along while the planet slowly burns. This is not surprising since The Climate Group’s corporate partners include Duke Energy, HSBC, Goldman Sachs, Greenstone, Nike and many others.

The existence of this Climate Group is why clear justice-based and transformational demands are critical. After all, this corporate Climate Group has, on its website, a call for people to join the People’s Climate March, using the very language from the march’s own website:

In September, world leaders are coming to New York City for a historic UN summit on climate change. With our future on the line and the whole world watching, let’s take a weekend and use it to bend the course of history. Let’s make the People’s Climate March the largest-ever demonstration demanding action on climate change.Together, we’ll take to the streets to demand the world we know is within our reach: a world with an economy that works for people and the planet. A world safe from the ravages of climate change. A world with good jobs, clean air, and healthy communities for everyone. This is the moment to bring our different movements together, articulate our common challenges and solutions, and go big.

Somehow I really don’t think Goldman Sachs has real solutions to climate change in mind. Climate justice activists, organizations, social movements, and Indigenous Peoples all over the world for decades have debated what kind of action should be taken to successfully and justly address climate change because “climate action” can mean so many different things. It can include for example, geoengineering—manmade manipulations of nature on such a massive scale that the impacts can’t possibly be known, but could definitely be catastrophic. It can also include actions already taking place, such as the building of vast hydroelectric dams that flood vast expanses of land and displace thousands of Indigenous Peoples or land-based communities. Climate action also includes ongoing grabbing of land for the development of vast plantations of oil palm, GMO soy or non-native trees for so-called bioenergy.So clearly, not all “climate action” is created equal. A lack of clear justice-based and ecologically sound demands in this march will leave a vacuum. And no vacuum remains empty for long. It’s simple physics. The Climate Group has already set up shop in that space. The problem is not just these really creepy bedfellows: The media will not cover a march with no demands. They will find a message, and if it’s not The Climate Group’s ‘business will save the planet’ message, what will it be?

I predict the media will head to the US climate movement’s oddly charismatic de facto leader, Bill McKibben. Why is this a problem? While the man is a brilliant conservation biologist with a very full grasp of the dire nature and science of climate change, he is not an activist, and has a very limited understanding of movement strategy and history. Take for example, his June piece in Rolling Stone magazine, “A Call to Arms: An Invitation to Demand Action on Climate Change.” In the article, he explains the importance of the September 21st march in making real strides for climate action. He states,

So in this case taking to the streets is very much necessary. It’s not all that’s necessary – a sprawling fossil-fuel resistance works on a hundred fronts around the world, from putting up solar panels to forcing colleges to divest their oil stocks to electioneering for truly green candidates. And it’s true that marching doesn’t always work: At the onset of the war in Iraq, millions marched, to no immediate avail. But there are moments when it’s been essential. This is how the Vietnam War was ended, and segregation too – or consider the nuclear-freeze campaign of the early 1980s, when half a million people gathered in New York’s Central Park…

Right. Okay. Where to start. First of all, as has been pointed out to Mr. McKibben on countless occasions, stopping fossil fuels will not stop climate change—though I guess now, with this “big tent,” we’re not even calling for that. But anyway, if business as usual continues based, not on fossil fuels, but on bioenergy (the US military, for example, is transitioning some of their fleet to biofuels and is investigating the manufacture of “green bombs” using synthetic biology), then we still lose. As a scientist friend calculated, replacing the amount of fossil fuels we are currently using with bioenergy would require six planet’s worth of land. We truly do have to change the system. Not what is fueling it. Business as usual has to go. Unfortunately power concedes nothing without a demand. In fact, power concedes nothing without being given no other options.Which brings me back to the Rolling Stone article. Marching. McKibben writes about the power of marching to make great change. Two of the examples he gives are ending the Vietnam War and stopping segregation.

Let’s just focus on the Vietnam War for a moment. Yes, there were marches and they were huge and they were great. There were also mass direct actions, such as May Day 1971 when affinity groups took over the bridges and traffic circles of Washington, DC with the aim of shutting down the city. My husband, Orin Langelle, who was part of an affinity group there, watched the marines land at the Washington Monument. The Weather Underground conducted over 6,000 bombings of military targets in the US. There were the Yippies, White Panthers, the SDS, and the VVAW. Moreover, the GIs in Vietnam, sick of the pointless and bloody war, started turning their weapons on their officers. The army was facing a mounting internal rebellion. And of course the Vietnamese People staged an effective and tireless resistance to the US invasion—even in the face of casualty numbers of more than 50 to one—and even in the face of their luscious homeland being turned into a toxic wasteland by Monsanto’s Agent Orange.

The sum total of these parts is what ended the Vietnam War. Not a march, not promoting green alternatives to the war, and not electoral politics (unless you count the Yippies running Pegasus the Pig for President in 1968). People on many fronts made both the war and business as usual impossible.

Likewise with segregation. The civil rights movement did not make the gains it made with a march that was organized with the permission of the police. There were marches, yes, but the marches themselves were unpermitted acts of civil disobedience, and they were met with extreme repression fuelled by hate. We all remember the black and white videos of the fire hoses and the police dogs, the many civil rights activists who were beaten, jailed, murdered. And not to forget the crucial role of the Black Panther party, which took up arms in 1966 in order to further advance civil rights and to defend their communities against attacks by the police. But they also ran breakfast programs for children and promoted a comprehensive set of demands.

But back to this march in New York City, planned in cooperation with the police, and void of demands. Will the mere presence of 200,000 people (including representatives of Duke Energy and Goldman Sachs) marching in the city be meaningful enough to make a difference—to shake up the world’s leaders to take climate change more seriously?

In his Rolling Stone piece, McKibben quotes a Princeton scientist who stated, “We are all sitting ducks.” That is true. However, the missing analysis in this assertion is identifying just exactly who is holding the shotgun. The inference is that it is climate change pointing its double barrels at us, but I disagree.

We are sitting ducks alright, but the ones threatening our existence are the ones on Wall Street and its equivalents, buying policies that maintain business as usual. Like Chad Holliday, the Chair of Bank of America (who co-Chairs the UN’s absurdly named Sustainable Energy for All initiative), the Koch Brothers, Chase Manhattan Bank, oh yes, and Duke Energy and Goldman Sachs… A smorgasbord of the power elite.

My hope is that folks coming for the march will be inspired by the powerful accomplishments of the movements that came before and will form affinity groups to take their outrage and their demands directly to the source. Directly to the ones holding the shotguns. Making their business as usual impossible.

The Climate Group’s “Climate Week” from September 22-28, for instance, might be an excellent choice… Take our rage right to the source.

As Dr. Martin Luther King Jr. pointed out, “The question is not whether we will be extremists, but what kind of extremists we will be… The nation and the world are in dire need of creative extremists.”