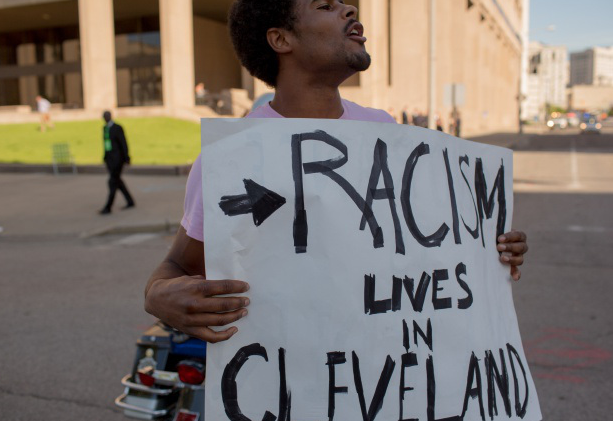 With screams of “Take them off!” Black Lives Matter activists refused to disperse until police released a 14-year-old boy who was arrested with no apparent cause.

They got a 14 year old handcuffed going into the ems #m4bl pic.twitter.com/q42VeGcgYN

The boy was allegedly thrown to the ground and pepper spray was used all because he was suspected of breaking open container laws. According to witnesses, he was carrying a Snapple. More below:

RTA Police are leading the investigating and Cleveland Police are assisting.   Cleveland Police blocked off Euclid Avenue at East 30th Street, but have since removed the block.   Cleveland Police, Cleveland State Police, RTA Police, the Cuyahoga County Sheriff’s Office and Cleveland EMS were all spotted at the scene.   Multiple witnesses tell newsnet5.com officers used pepper sprayed on several people. Video in the player above purports officers using pepper spray on protesters.   The 14-year-old boy was treated by EMS and released into the custody of his parents, according to Jonathan Walsh.

Read more at ABC 5. Earlier: The Movement for Black Lives conference, which took place at Cleveland State University in Cleveland, Ohio, turned violent on Sunday as police did what they seemingly do best: brutalize Black people. SEE ALSO:  Choctaw Activist Found Dead In Miss. Jail Cell After Traffic Stop Arrest The Watchers: Feds Have Been Monitoring Black Lives Matter Activists Since Ferguson Human Rights organization The Dream Defenders tweeted out the incident to their followers:

And more details soon followed, including video of the incident:

RT @TyreeBP: WATCH: This is the officer who sprayed #M4BL attendees with pepper spray. pic.twitter.com/J6J0iISXiR

The Cleveland Police Department (@CLEpolice), have not made a statement, but the Movement for Black Lives Twitter page  (@mvmt4bl) updated supporters:

RN “You can’t write this sh*t bruh.” A butterfly over the cheering crowd after Black teenager was released. #M4BL pic.twitter.com/dTzgZooqIV

Read more about the Movement for Black Lives below:

Hundreds of Black freedom fighters from around the country will come together for the inaugural Movement for Black Lives Convening in Cleveland, OH, from Friday July 24 to Sunday July 26th, 2015.

This historic event comes at a pivotal time for the growing movement for Black lives in the United States. Black people are facing unabated police violence, increasing criminalization, a failed economic system, a broken education system and the loss of our communities to gentrification and development. Our trans and queer communities face the increased risk of physical and economic violence. The list of indignities regularly faced by the Black community is long and untenable.

Many have taken to the streets in response to this ongoing state of emergency. During the past year, Black people from across the country have led a wave of resistance that has spread around the world. A new crop of freedom fighters has emerged and urgent desire for Black victory has been rekindled in the hearts of seasoned activists.

Now, after months of intense action, our people need space to begin the creation of a collective mission that matches the intensity, scale, urgency, and promise of the moment. This convening presents an opportunity for us to reflect on our histories of struggle, build a sense of fellowship that transcends geographical boundaries and begin to heal from the many traumas we face.

This story is developing…