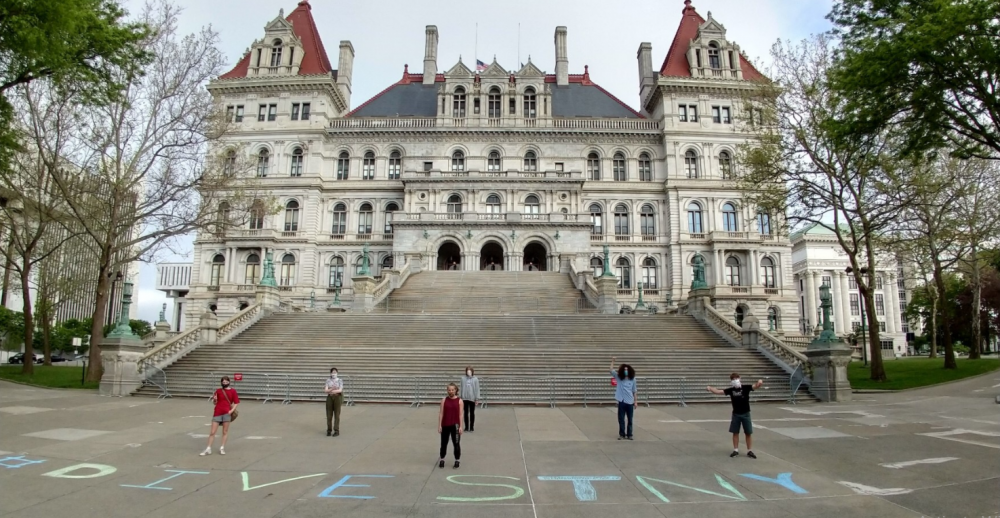 Above photo: A group of NY2CL activists met in Albany to chalk pro-divestment messaging outside of the Capitol building when the legislative session began in May. NYYCL.

When New York State Comptroller Thomas DiNapoli announced last month that the state would divest its over $200 billion Common Retirement Fund from more than 20 coal companies, it marked an important milestone for a grassroots campaign that has seen a recent burst of new momentum. In an op-ed published on July 12, DiNapoli stated, “After a thorough assessment, the fund has divested from 22 thermal coal mining companies that are not prepared to thrive, or even survive, in the low-carbon economy.”

This victory is thanks to a near decade-long effort by activists who have been pressuring New York to divest from the companies most responsible for causing the climate crisis. A surge in youth-led activism has brought new energy to this campaign, putting pressure on both the comptroller’s office and state legislators. While New York still has not ended its investments in oil and gas companies, DiNapoli’s decision to divest from coal shows climate activists are having a real impact on one of the largest state pension funds in the United States.

The New York fossil fuel divestment campaign began in earnest in 2012, at a time when calls for public institutions to shed investments in coal, oil and gas corporations were sweeping the nation. A student-led divestment movement that began at Swarthmore College a couple years earlier was being amplified by national climate groups like 350.org, which saw divestment as an effective way to challenge the fossil fuel industry’s grip on political power. The movement soon spread to churches, private foundations and local governments.

Today, more than a thousand institutions across the United States and the world — including colleges and universities, local governments, faith organizations and foundations — have committed to divest a total of over $14 trillion from some or all fossil fuel companies. However, getting state pension funds on board has been more difficult. While states like Massachusetts and Hawaii have seen divestment campaigns gain traction, they have not yet committed to ending their fossil fuel investments. California’s State Teachers’ Retirement System and Public Employees’ Retirement System have divested from coal only.

In New York, activists have argued since 2012 that divestment should be part of the state’s response to the climate crisis — often pointing to the devastation of Hurricane Sandy and coastal communities’ vulnerability to rising sea levels. However, for years divestment proposals have made little headway despite other encouraging wins for the fight against fossil fuels.

In 2015, responding to a years-long public pressure campaign, Gov. Andrew Cuomo’s administration banned the toxic practice of natural gas fracking — making New York the first state with significant gas reserves to do so. (In April this year, legislators codified this executive action into law.) At the local level, New York City announced its largest pension funds would divest from fossil fuels in 2018. The city has also enacted climate policies that include a law requiring large buildings reduce their carbon emissions 40 percent by 2030.

At the same time, however, state-level legislative action on climate in New York was stalled for years by the Independent Democratic Caucus, a group of conservative Democratic legislators who joined with Republicans to kill progressive legislation. When the 2018 primaries swept most caucus members out of office, climate groups saw a chance to make real progress. Sure enough, in June 2019 the legislature passed one of the most aggressive climate plans in the country, the Climate Leadership and Community Protection Act. The law is designed to put New York’s entire economy on a path to net zero carbon emissions by 2050.

Successes like this raised climate activists’ hopes that a win on divestment might be possible. “It doesn’t make sense to invest in fossil fuels when New York has to reach carbon neutrality by mid-century,” said Rochester high school student Bridget Mousaw of New York Youth Climate Leaders, or NY2CL. “It’s completely illogical to put money into in an industry we know needs to be dismantled in the next 30 years.”

Accordingly, New York climate activists have rallied behind the Fossil Fuel Divestment Act, a bill introduced by State Sen. Liz Krueger and Assembly Assistant Speaker Félix W. Ortiz. A legislative approach seemed necessary, because Comptroller DiNapoli had so far been unwilling to take substantive unilateral action on divestment. DiNapoli has argued the state should instead use its status as a shareholder to advocate fossil fuel companies change their behavior — an approach climate groups are skeptical will work. Last year, ExxonMobil stymied a shareholder resolution supported by DiNapoli that would have required the oil company to reduce its carbon footprint.

“New York prides itself on being ahead of the curve on climate,” said Natalie Penna, an NY2CL coordinator for the Albany area. “With divestment we’re pushing them to live up to that reputation.”

Nevertheless, despite acting to curb New York’s own carbon emissions, the legislature at first proved reluctant to divest from the industry that has done more than any other to cause the climate crisis in the first place. To change this, activists knew they would need to increase public pressure.

On Feb. 28, high school students in Rochester, New York rallied outside the office of State Assembly member Harry Bronson, calling on him and other legislators to support a bill mandating the comptroller’s office divest from all fossil fuel companies. The demonstration was one of several occurring across the state in communities, including Kingston, Long Island and New York City.

“The logic of divestment is easy to understand,” said NY2CL Executive Director Hridesh Singh, whose group organized the day of action. “Companies like ExxonMobil, BP, and Shell are fueling the destruction of the climate, and fossil fuel stocks are underperforming because of the success of renewables. By having money invested in those industries, you’re failing your duty to stockholders and fueling the climate crisis.”

Singh had long been concerned about climate change and helped launch a climate club at his school in Rochester. However, he was inspired to bring his involvement to the next level on Sept. 20 last year, when a quarter of a million people marched in New York City as part of a global day of action organized by the Fridays for Future climate strike movement. Singh attended with some Rochester friends. “It made me want to take my activism onto a bigger stage than just my local area,” he said.

In November 2019, Singh and other students from around the state formally launched New York Youth Climate Leaders. The organization now includes college, high school, middle school and a few elementary school students from all over the state. In January they began focusing their efforts on divestment, partnering with the existing coalition of climate groups working on the issue called Divest New York.

“One of our organization’s biggest successes has been collaborating with Divest New York,” said Anna Cerosaletti, another Rochester NY2CL leader. “They’ve allowed us to meet adult allies who have helped us throughout our journey. What we’ve brought to the partnership is a lot of energetic youth who are hyped to help out with the campaign.”

NY2CL organized to support the divestment bill through actions like the Feb. 28 day of protests, as well as meetings between students and their individual representatives. Although frustrating at times, these interactions have helped the divestment bill slowly gain traction. “Even if you’re talking with a politician who doesn’t believe climate change is an issue, it’s important to understand where they’re coming from,” Singh said. “Then you see if you can try to move them a little bit in the right direction.”

On April 21, about 150 young people and supporters from all over New York met with their state legislators as part of a lobby day organized by NY2CL. Prior to the COVID-19 outbreak, the organization had planned to hold in-person meetings in the lead up to this year’s Earth Day, but having to move online didn’t stop them from moving forward. It may even have resulted in increased participation.

“In some ways it’s been easier working online,” Cerosaletti said. “We have people scattered all over the state. Going online, we’ve been able to talk to legislators who students normally wouldn’t be able to travel to meet with.”

The lobbying effort continued through the spring, with local organizing leads around the state coordinating communication with legislators. As a result, the Divestment Act is now only one vote away from majority support in the New York Senate, and a handful away from passage in the Assembly. Pushback has come from certain unions who have a close relationship with the comptroller’s office, including New York’s police union. Other organizations, like the Working Families Party and Albany County Central Federation of Labor, support the Divestment Act.

Even as climate activists continue working to increase support in the legislature, their efforts indirectly put pressure on DiNapoli’s office. If the Divestment Act passes, it would force the comptroller to take action according to the legislature’s timeline — something DiNapoli could avoid by getting out in front of the issue. “As more legislators sign onto the bill, DiNapoli will feel more pressure to support divestment himself,” Mousaw said.

In January 2019, DiNapoli announced his office would review its investments in over two dozen coal companies — including four that the comptroller later determined had adequate plans in place for shifting their business models away from the fuel. Last month’s announcement that the state will divest from the remaining 22 companies marks the culmination of its assessment of the coal industry.

DiNapoli’s July 12 op-ed stated that the comptroller is also reviewing its investments in tar sands extraction companies, and that “we will follow that with assessments of other industries that are at high risk from climate change, including other companies in the energy, utility and transportation sectors.”

According to a December 2019 news release from Sen. Krueger’s office, New York’s investments in the oil and gas industry include $133 million in Shell Oil and more than $1 billion in ExxonMobil. NY2CL and the Divest New York coalition plan to continue pushing for divestment from all fossil fuels, engaging both legislators and the comptroller’s office.

“Our main strategy has been focused on legislation because DiNapoli has been so strident in his opposition to full divestment,” Singh said. “But legislative momentum also pushes the comptroller to take action. He probably wouldn’t have divested from coal if we hadn’t gotten nearly 100 legislators signed onto the Fossil Fuel Divestment Act.”

By adopting a two-pronged strategy of engaging both the state comptroller’s office and legislators, NY2CL and Divest New York won a major victory against the coal industry and are closer than ever to ending the state’s investments in all fossil fuel companies. Now they plan to keep pressuring lawmakers to support the Divestment Act — and if DiNapoli decides preemptively to shed the retirement fund’s oil and gas investments in the meantime, so much the better.

“We’re in the final stretch to get a majority of legislators signed onto the bill,” Cerosaletti said. “We’ve proven that with effective organizing we can get the support of more lawmakers and win victories. Now we need to keep lobbying.”