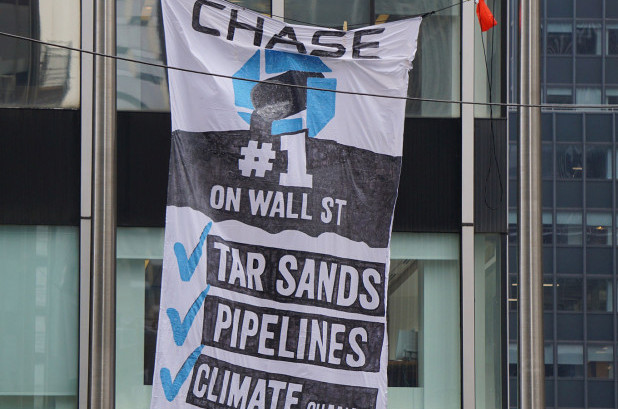 At the onset of the second week of COP23 in Bonn, Rainforest Action Network protesters demand CEO Jamie Dimon #DefundTarSands

According to a recent report from RAN, JPMorgan Chase is the top U.S. funder of tar sands oil — one of the dirtiest fossil fuels on the planet due to the immense volume of deforestation, environmental impacts and increased greenhouse gas emissions from the point of extraction to refining to burning. Tar sands oil produces 20%more  greenhouse gases than conventional oil. As NASA Scientist James Hansen famously said, further expansion of tar sands oil means “game over for the climate.”

Despite the disastrous impacts of tar sands oil, JPMorgan Chase is actually ramping up its investments in the sector. The bank has poured nearly $2B into tar sands in the first three quarters of 2017 alone — already a 17% uptick from 2016. This includes funding for pipelines that slice through Indigenous lands, trample on human rights, and threaten clean water.

While the nations of the world meet in Bonn, Germany, at the UN Climate Change Conference, it is clear that governments alone cannot avert climate disaster. Global financial institutions like JPMC have a pivotal and outsized role to play in achieving a stable climate and livable planet for our children.

“If CEO Jamie Dimon really wants to set himself apart from Trump and not feed into Trump’s agenda to lock us into decades of further toxic pollution from the fossil fuel economy, he needs to do the right — that means align his bank’s policies with both the 1.5C target of the Paris Agreement and with respecting the right of Indigenous peoples to Free Prior Informed Consent (FPIC) on projects that impact their communities,” said Patrick McCully, Climate and Energy Director at Rainforest Action Network from Bonn where he is attending the COP23. “Now more than ever we need banks to implement such safeguards amidst this leadership vacuum with Trump pulling out of the Paris Climate Agreement.”