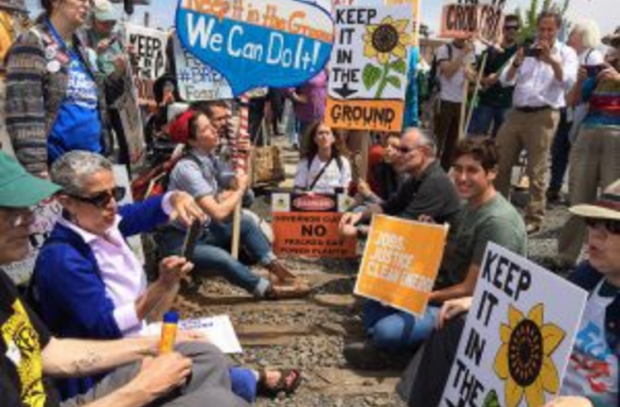 Albany NY — Over 2,000 climate activists took part in a mass demonstration and blockade of a rail yard leading to a crude oil site run by Global Partners at the Port of Albany on Saturday. The action was a protest of so-called “bomb trains” which transport a volatile form of crude oil. It was organized with a coalition of over 100 groups, including Climate Disobedience Center, AVillage, and 350.org. The blockade was also coordinated with over 20 other protests being held over two weeks on six continents, named “Break Free From Fossil Fuels,” to demand rapid transition to renewable energy.

There was no train traffic at the Port during the track sit-in because Global Partners, a tenant of the port, had emptied and removed all rail cars from the yard a day earlier, in anticipation of the civil disobedience action.

Police were on hand but made no arrests during the Port action. Five activists however were arrested when they blockaded a train about 15 miles away at Guilderland, NY. Marisa Shea and Maeve McBride rappelled from a railroad bridge and hung above the tracks forcing the train to stop. They were arrested along with three people from their support team and charged with multiple counts, including interference with a train, trespass, and conspiracy. All five were released late Saturday night on their own recognizance with a court date scheduled, according Aly Johnson-Kurts, media coordinator for Break Free Albany.

Part of the protest split from the Port of Albany group and walked nearby to support a frontline neighborhood of Ezra Prentice Homes, where families are reporting health affects of Bakken crude oil trains passing within feet of their homes. The families are in a legal battle with Global Partners over emissions from the rail cars.

In February 2016, local groups in Albany joined Earth Justice and a coalition of environmental groups filed suit against Global Partners on behalf of the families, alleging violations of the Clean Air Act from the Bakken crude. There are two ongoing lawsuits over the facility.

In 2014, crude by rail through Albany more than tripled to more than 2.8 billion gallons a year, according to a press release by Break Free Albany. Shipments pass only 25 feet from the Ezra Prentice Homes neighborhood. The public housing development is separated from six railroad tracks by a 20-foot-high green chain link fence.

The trains pass by the homes at all hours, emitting noxious fumes and causing asthma and other respiratory problems for over 200 families, according to Kim Turner, a longtime resident at Ezra Prentice Homes. “They come through here every day. I’ve got allergies, my kids got allergies, and [I] can feel my apartment shake like it’s an earthquake,” she said. “It smells like burnt rubber mixed with rotten eggs,” her eight-year-old son added. Turner also reported the vibrations from the rail cars knock picture frames from the walls.

Next to the homes is a crowded children’s playground, also separated from the tracks by the green chain linked fence. “It’s the worst environmental racism I’ve ever seen in my life,” said Jim Freeman, of Maine EarthFirst! Freeman, who took part in the blockade, had also visited the housing complex and spoken to residents and expressed surprise at how close the trains pass by the homes.

“We all deserve clean air, every neighborhood, every community-we all deserve clean water,” said Reverend Marc Johnson of Greater St Johns Church of God, whose church is less than 400 yards from Global Partners oil transfer site.

Saturday’s action marked an escalation of the campaign against the Bakken crude oil trains. Aware of the upcoming protest, Global Partners had removed 60 train cars from the yard two days prior to the blockade. “They didn’t want to give an opportunity to do anything or divert the trains, so they’ve been out of here since yesterday,” said Freeman.

For the last few years, this community has campaigned against the trains, including taking part in two lawsuits against Global, the company that operates the oil offloading facility.

Bakken Shale crude oil from North Dakota is more volatile and toxic as a result of petroleum byproducts added to it to enable shipping.

In 2013 an oil train derailed at Lac-Mégantic, Quebec, killed 47 people after a 72-tanker train broke free. The disaster was among a series of derailments which resulted in explosions of oil-laden trains.

As night fell in Albany, about 100 activists remained to continue blocking the rail yard and occupy the tracks after many protesters had left. They hung tarps as rain began after 6 pm, but police removed them, forcing them to sit in the rain. The remaining protesters left the tracks at 10 pm.

Johnson-Kurts said that they knew it was illegal to occupy train tracks but Albany police were reluctant to arrest so many people. “They successfully stopped the train bomb traffic for a day, and that was the goal of the action,” said Johnson-Kurts.