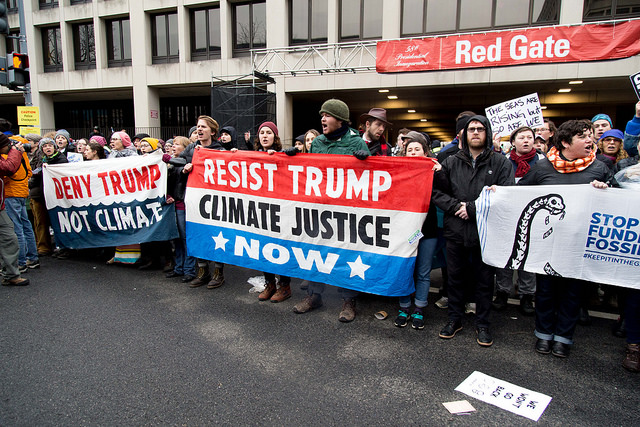 WASHINGTON, D.C. – Today, a group of over 400 climate justice activists physically blocked a security checkpoint entrance to the Presidential Inauguration for four hours as part of the distributed #DisruptJ20 protests happening in D.C. and around the country.

The climate demonstrators peacefully spread out and linked arms across the security checkpoint at 3rd and D streets NW, and refused to move, physically blocking the entrance and denying access to the inauguration grounds.

The protest caused a massive disruption of the checkpoint, making the line extend for a half-mile. Once Donald Trump was inaugurated, protesters chose to peacefully disperse, having accomplished their goals.

The protesters held signs and large banners reading “Resist Trump: Climate Justice Now” and “Deny Trump, Not Climate.” Protesters could be heard chanting “Pipelines spill, oil kills” and “Trump’s cabinet is a joke, climate change is not a hoax.”

This blockade was part of a larger day of action organized under the banner of #DisruptJ20 – which held blockades at multiple inauguration checkpoints and other actions across D.C. and in dozens of cities around the nation. The protests were successful in preventing or delaying access to the inauguration, resulting in dramatically lower attendance than in recent history.

Participants had the following to say:

“We’re here to show that people will resist Donald Trump. We will stand up against his racist and oppressive agenda of climate destruction, corporate corruption, and the dangerous trampling of our rights. This resistance is just the beginning, we will be standing up everyday he and his allies are in office. Today, we stood up for social justice, racial justice, climate justice, and all that is right.” – Liz Butler, climate organizer.

“Though he seems to be a wealthy man, Donald Trump cannot see the deep value of breathable air and drinkable water. He does not see the value in diverse American communities, nor in Government officials who do not personally profit from exploiting our nation’s resources. We intend to defend the health of our climate and the safety of our communities against this Administration not just today but each day ahead.” – Jay Carmona, organizer for climate justice, LGBT equality, racial justice, and government accountability.

“We are standing up today to show the Trump administration and his supporters that we aren’t going to sit quietly while our communities are under attack. If the administration follows through on any of his campaign promises that harm our climate, harm Muslims, black lives, queer rights, immigrants, or workers we will be there to say no. This is the first of many protests that will say loud and clear that Donald Trump does not have a mandate to roll back our rights and worsen climate change.” – Linda Capato Jr, climate and justice activist.