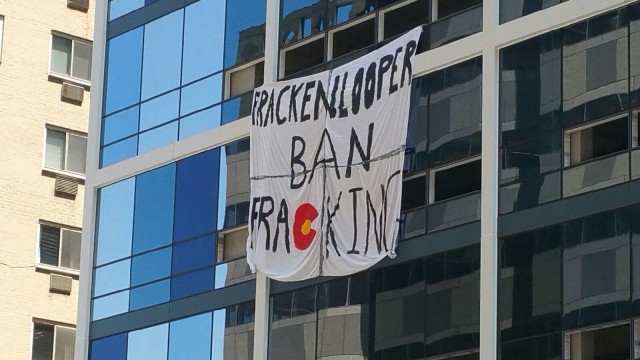 More than a dozen activists were forcibly removed from the event after openly criticizing the fossil fuel industry and entrenched political leaders. Additionally, activists dropped a 400-sq-foot banner from the building across the street, and picketed the entrance to the event as it began.

Activists expressed deep concern that API-sponsored energy events at the DNC are still acceptable platforms for Democrats to attend, despite the oil and gas industry’s long history of climate denial and “dirty energy money” campaign donations. Over the last decade API has directly donated nearly $150,000 to Democrats, and its member corporations have donated many millions more.

Inside the Politico event, advocates demanded the Democratic Party follow through on its climate commitments and take immediate steps to keep fossil fuels in the ground instead of blindly catering to oil and gas industry executives.

Frontline Indigenous youth who were present also expressed deep concern that many of the featured speakers have close ties with the fossil fuel industry that is polluting their air, water and threatening their way of life. Said Krystal Two Bulls of the Oglala Lakota/Northern Cheyenne, “The fossil fuel industry and the politicians who cater to it are responsible for devastating Indigenous communities across the country. For too long, our voices have been the target for silencing for the greed, consumption, and power of the colonial settler society. We’ve come to Philadelphia to be silent no more.”

Sheldon Tenorio of Kewa Pueblo added, “The fossil fuel industry isn’t accountable to communities like mine that are exploited for short term profit and left scarred forever. They can’t ignore our voices, even from fancy luncheon events in skyscrapers.”

“The story of the struggle of Colorado, particularly in my home, Weld County – the most fracked county in the nation – is that we have been trampled by the fossil fuel industry. There’s a chokehold on our state, but also a huge effort to take confront it and fight back. The people are ready and we are taking on the good fight. That’s why we’re here,” Mickey San Miguel said.

“How can you commit environmental genocide? Cultural genocide, corporations are raping our mother. How would you feel if someone raped your mother? With the time that I have, with the ears that are tuned in, I’d like to ask you this: What will you celebrate — will you celebrate the continued genocide of our people, of the land, the natural resources, cultures, and our ways of life, or will you celebrate the gifts of our mother, our languages, our land and our clean water? What will you hand down to your children? What are you handing down to their children?” – Sheldon Tenorio of the Kewa Pueblo.

“It’s time for a culture of accountability. Democrats need to go beyond paying lip service to the climate threat while still supporting the policies that exacerbate it. Gov. Hickenlooper actually sued municipalities in Colorado for banning the extreme and environmentally racist practice of fracking.” He added, “fracking is a profound demonstration of oppression, slow violence and genocide. It has to stop and we will hold any politician and their energy advisors accountable for pushing a poisonous practice that is taking lives, breaking sovereign treaties and pillaging freshwater from those who need it the most. The debate is over, natural gas is not a source of clean energy, and when Democrats push fracking, they themselves are behaving like bonafide climate deniers.” – Anthony Rogers-Wright, Policy Director at Environmental Action.

“The science of fracking is very clear: between toxic chemicals used in extremely high quantities along with the chronic failure of fracked infrastructure, which leads to threats of contamination, it’s clear that fracking can’t be made safe. By polluting the Democratic party with their toxic dollars, the gas frackers are purchasing our energy policy and, thereby, sacrificing communities, and endangering the lives of innocent citizens while poisoning our air, water, food, and climate.” – David Braun, co-founder of Americans Against Fracking.

“This event is no different than imagining the Democratic Party attending an event on Smoking and Children’s Health sponsored by Big Tobacco companies. Now we better understand why President Obama has leased more than ten million acres of public lands to oil and gas companies and never bothered to analyze the climate impacts. It’s obvious today that people are fed up and demanding our elected officials cut political and fundraising ties with an industry directly responsible for destroying communities and our children’s future.” – Rebecca Sobel, Senior Campaigner at WildEarth Guardians.

“In 2016, it is unacceptable for Democrats to be legitimizing a fossil fuel industry-sponsored energy event. Fossil fuels are the energy of the past – politicians must stop taking oil-drenched donations from the industry and must work to keep fossil fuels in the ground. Support for expansion of fracking and natural gas is completely at odds with the climate targets agreed to in Paris, and with a just transition to clean energy.” – Collin Rees, Campaigner at Oil Change USA.

“We cannot answer the climate crisis without ending the power of Big Oil money in our democracy. Polluter cash has no place at the Democratic National Convention.” – Lukas Ross, spokesperson at Friends of the Earth Action.