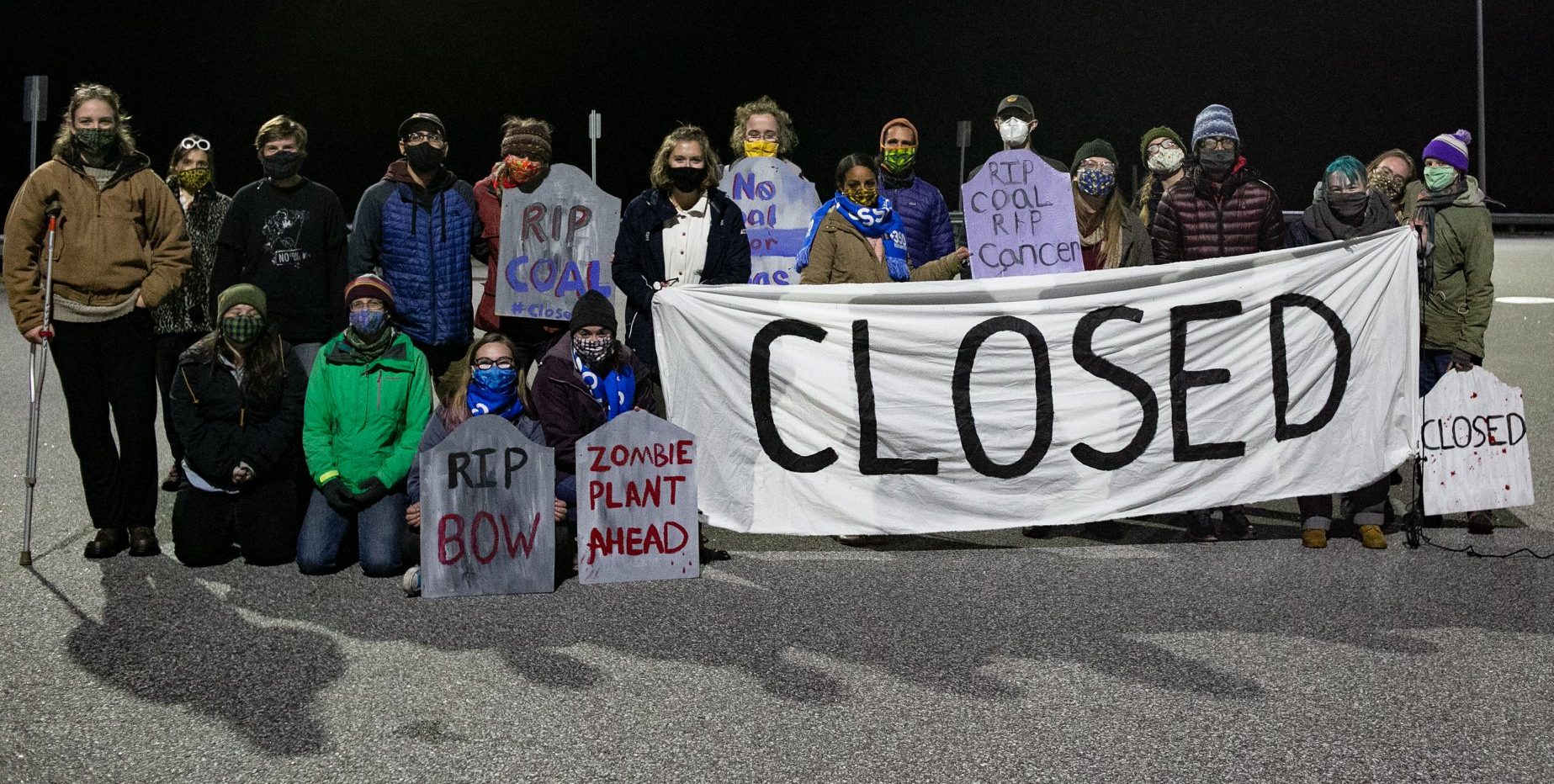 Above photo: Activists protest the continued burning of coal in New England by refusing to pay utility bills, and mailing coal to the utility company instead. Facebook/No Coal No Gas.

The Strike Down Coal campaign provides a COVID-safe form of disobedience, building on more than a year of direct actions to shut down Merrimack Station.

Santa is not the only one giving out coal this year. Climate activists like Johnny Sanchez and Sonja Birthisel in Portland, Maine, recently sent their utility company an envelope of coal instead of payment towards their electric bill. This symbolic act of defiance, organized by the No Coal No Gas coalition, is part of a broad New England consumer strike against utility payments to protest the continued burning of coal.

The Strike Down Coal campaign launched on Sept. 1 and aims to continue until ISO New England — the system operator responsible for running New England’s energy grid and power system — agrees to stop subsidizing coal. By withholding payments, activists hope to send the utility company a message that burning coal is unnecessary, not to mention financially and morally irresponsible. Fifty people are currently withholding payments, while more than 40 others have participated in orientation sessions, and dozens are acting as volunteer support. Many of the strikers have recorded videos of themselves mailing envelopes of coal to ISO-NE on social media, and some residents are donating their payments to support racial and environmental justice organizations.

“The strike is a powerful way that we can connect economic and racial justice to the atrocities of our utility system,” said Leif Taranta, an organizer with the No Coal No Gas coalition. “It’s time to demand that our ratepayer dollars go towards helping our communities, not destroying our livelihoods and our planet.”

The No Coal No Gas coalition has been engaging in direct action for over a year to force the shutdown of Merrimack Station in Bow, New Hampshire. Organizations such as 350NH, 350VT and Climate Disobedience Center have mobilized more residents to join the strike. No Coal No Gas is currently forming partnerships with organizations in different New England states to have them promote the strike with their members. Meanwhile, activists are “friend-banking,” or calling people in their networks, to spread the word and recruit more participants.

Once people have pledged to join the strike, they receive an envelope of coal in the mail — collected by activists during a direct action last year — to send to their utility company in lieu of a payment. Some participants are also opting to donate their utility payments to organizations helping marginalized communities hit hard by the economic fallout of the climate crisis and COVID-19.

Why a consumer strike?

Strike Down Coal is a powerful direct action campaign that not only withdraws financial support from Merrimack Station, but also models a way for other consumers to exercise power against the fossil fuel industry. As students of such nonviolent tactics, Strike Down Coal’s organizing team (which includes me) believes this kind of direct action can force a large-scale industry change quicker than electoral or advocacy efforts. And when it comes to reducing greenhouse gas emissions, time is of the essence.

That’s why No Coal No Gas has been committed to direct action from the beginning. In August 2019, a dozen activists risked arrest by walking onto the grounds of the power plant and removing 500 pounds of coal. A few days later, we dumped most of the coal in front of the New Hampshire State House, and a portion of the rest is what’s being sent to ISO-NE in lieu of utility payments. This action motivated a network of groups to take further collective action to shut down the plant.

A month later, on Sept. 28, 67 of us were arrested for trying to “liberate” more coal from the plant. As we sang songs of love and unity, we were prevented from reaching the coal piles by local law enforcement, state police in full riot gear, the National Guard and the sheriff’s department.

Throughout last winter, activists also staged six railroad blockades, which caused significant delays and disruptions to the coal trains on the route to Bow. The last blockade stopped the train for nearly 17 hours in Harvard, Massachusetts, as protesters assembled and occupied a 16-foot-tall scaffolding structure on the tracks.

Since participants in the utility strike aren’t risking arrest or facing potential exposure to COVID-19, the strike provides a more accessible way for people to join in nonviolent direct action with the campaign. It withdraws consent from the system, but without facing criminal charges or infection.

“We’re drawing on the age-old history of strikes and boycotts, where lots of us collectively withhold consent or participation, demanding more from whoever is in power,” said Jeff Gang, one of the strike organizers. “It’s exciting to get people to think about ways they can engage in direct action and try to build the kind of world we want. The strike is not the same as blocking a train or removing coal, but it’s withdrawing consent from the system, and it’s exciting to see people respond to that.”

The Strike Down Coal campaign is providing people from all walks of life the opportunity to engage in a powerful action without putting themselves or their loved ones in physical danger. Nevertheless, some have expressed concern that a consumer strike during the COVID-19 pandemic could pose a risk to the state’s moratorium on shutting off people’s electricity for nonpayment. But so far, there is no indication from any government officials that the moratorium is at risk. In fact, the moratorium was a strategic asset to the strike, because people are not at risk of losing their electricity for nonpayment of their utility bills.

One of the strike’s main objectives is to bring awareness to the issue of burning coal and the carbon footprint it creates. In the case of Merrimack Station, the plant produces the same amount of carbon in just one hour as the average American over the course of 26 years. While advocates like to point out that the plant is only in operation approximately four months out of the year, during peak energy usage, activists see this as part of the problem.

Every year, hundreds of millions of dollars in government subsidies are provided by New England taxpayers to keep Merrimack Station open during the months it’s not in use. These funds could go toward more sustainable, economically viable energy sources, like wind turbines and solar sites.

While organizers work to draw attention to this wasteful spending, along with the plant’s pollution, participants of the strike are also building community. In Hooksett, New Hampshire, approximately 35 people joined a masked and socially-distant gathering on Oct. 17, as a one-year celebration of the grassroots effort to shut down the Bow plant. We built art installations in front of Merrimack Station to highlight its obsolescence, with tombstones bearing messages like “Zombie Plant Ahead.”

Then, earlier this month, strikers held a remote watch party for a webinar hosted by the attorney general of Massachusetts, who is doing outreach to consumers about reorganizing ISO-NE. The watch party provided a virtual gathering space for organizers to better understand how electricity is produced, delivered and managed in New England — so that we can improve our messaging about why the strike is necessary.

According to strike organizer and ecologist Sonja Birthisel, the strike is not just about opposition to coal, but building a new vision for a just future. “We’re making it possible to envision and create a better world — one in which everyone has access to the resources we all need, and where we are serving as stewards of this planet.”

As organizers work to increase strike participation to 250 people by Spring 2021, there has not yet been any formal response from ISO-NE. By withdrawing consent from an unjust system, activists are showing elected officials and corporate executives that their power depends entirely on the people’s willingness to cooperate.

For decades, strikes have empowered activists to bring daily operations of large industries to a halt, forcing those in power to pay attention to the demands of ordinary people. The Strike Down Coal campaign is an opportunity for New Englanders to join in that long history of direct action and show energy companies that people are the ones who hold the power, if they choose to wield it.