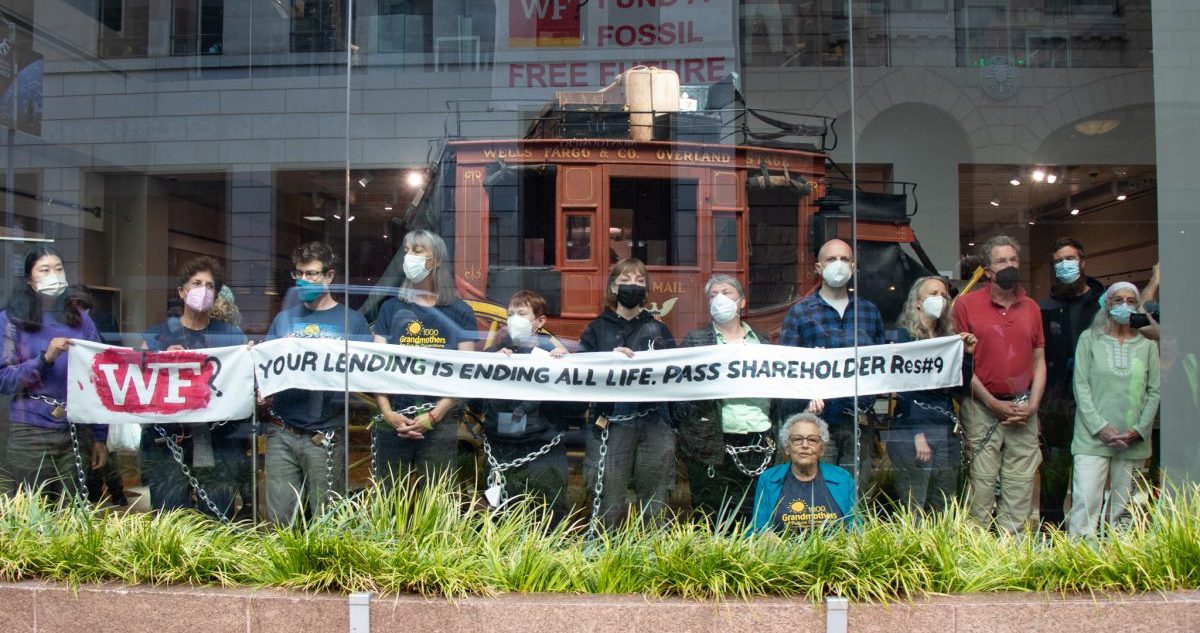 San Francisco — On the eve of Wells Fargo Bank’s annual shareholders’ meeting, 19 climate activists were arrested inside the bank’s headquarters demanding that it stop lending billions annually to the oil and gas industry, whose products are propelling the planet towards disaster.

Wells is the world’s second largest fossil fuel banker—second only to JPMorgan Chase—financing $46 billion last year out of a total $742 billion in financing made to the energy sector. The bank far outstripped its rivals by raising its industry financing total by $20 billion from 2020 levels, according to new research by a consortium of organizations including Rainforest Action Network.

“Wells Fargo is the poster child of climate profiteering,” says Alison Kirsch, policy and research manager of RAN’s climate and energy program. “Any further expansion of fossil fuels risks locking humanity into generations of climate catastrophe, yet Wells Fargo actually increased its fossil financing by roughly $20 billion last year, and the bank continues to dominate financing for the fracking industry. We demand accountability, because this recklessness will be paid for in human lives.”

The stunning increase came during a year of record-breaking weather and related events affecting every region in the country, and despite the bank’s lip service to promoting sustainability. Devastating wildfires, which raged across the West, turned the Bay Area’s mid-day skies dark orange in September 2020, even as the bank executives were piling fuel on those fires in the form of oil and gas lending. “Bank executives made those decisions right upstairs from where we are standing right now,” says youth climate justice activist Madeline Dawson. “Their lending is ending our lives.”

The activists, who chained themselves to an antique stagecoach in a museum gallery at 420 Montgomery St., part of the bank’s headquarters complex, say they are spotlighting the bank’s hypocrisy as it faces shareholder resolutions calling for it to halt its financing of new fossil fuel development. “We’re part of an historic momentum to keep fossil fuels in the ground. All over the globe, people power is fighting to keep money out of Big Oil,” said Leah Redwood, an organizer with Extinction Rebellion SF Bay.

In 2021, the bank was also the world’s largest single banker of oil companies that use hydraulic fracturing, or fracking, to increase oil and gas production, earning the bank the nickname “Wells Fracko.” Last year, Wells funnelled $8.5 billion (out of total $62 billion by major banks) to frackers who used the method to revive thousands of played-out wells in the Permian Basin in Texas, making Wells one of the most powerful forces behind the U.S. oil boom. In 2015, for the first time in decades, the U.S. became the world’s top oil and gas producer just as U.S. diplomats signed on to the Paris climate accords.

Wells Fargo along with Citibank and Bank of America are holding their annual meetings tomorrow. All three face shareholder resolutions calling on them to take the climate impacts of their investments more seriously, though they have urged shareholders to vote against them. The activists say they will continue their occupation of bank premises indefinitely.

“We hope shareholders and individual board members will do the right thing and support these resolutions,” says Maureen Katz of the Bay Area climate justice group 1000 Grandmothers for Future Generations. “The U.N. says we have just seven years to stop this spiral of destruction caused by fossil fuels. It is up to us to do everything we can to keep the banks from jeopardizing the future of our children, our grandchildren, everything that lives on the only planet we have.”

In the Bay Area, Wells Fargo’s hypocrisy on climate change is affecting the health and safety of hundreds of thousands of people everyday, particularly those living in frontline communities surrounded by industrial activity, such as oil refineries, and busy freeways. But the response of Wells Fargo and other big banks is to abandon vulnerable communities instead of addressing the root causes of climate change, for example, by funding local renewable energy projects.